Scientists swap the lab bench for the green bench

Scientists will trade lab coats for legislation when they meet with parliamentarians and civil servants in Westminster this week (23-26 November) as part of a unique pairing scheme run by the Royal Society, the UK’s national academy of science, with support from the Government Office for Science. 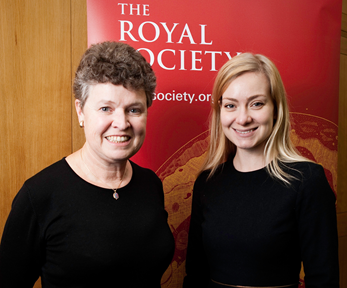 Nicola Blackwood MP (right) and Professor Kathryn Wood (left) were paired on the scheme in 2013.

The scheme pairs scientists with parliamentarians and civil servants so that they can learn about each other’s worlds and explore how research findings can inform policy making.

In Westminster this week the scientists taking part in the scheme will shadow a civil servant or parliamentarian and learn about their work. The scientists will also attend seminars and panel discussions about how evidence is used in policy making and take part in a mock Select Committee.

The visit will provide scientists with a behind the scenes insight into how policy is formed and how they can share their expertise with policy makers. It will offer parliamentarians and civil servants the opportunity to investigate the science behind their decisions and enhance their access to scientific evidence.

The week will begin with a reception in parliament where Jo Johnson MP, Minister for Science and Universities will speak about the value of UK research and the important role of scientific advice in parliament. Nicola Blackwood MP, Chair of the Science and Technology Select Committee will also speak about the Committee’s plans to investigate the evidence underpinning Government policies.

“Our world faces challenges that can only be addressed with a solid understanding of science. From climate change mitigation and adaptation to GM regulation, policy makers must make decisions about issues which will affect the lives of all those in the UK, and often, the global community. We must rely on them to make sound decisions based on the best available evidence when tackling these complex issues.

Scientists and policy makers have a responsibility to engage with each other to get the best possible scientific advice into public policy making. The Royal Society’s pairing scheme, now in its 15th year, provides an opportunity for MPs and scientists to build long term relationships to make the best evidence and scientific advice increasingly accessible. The shaping of public policy can only improve over time as these relationships continue to grow.”