Study shows majority of researchers are participating in public engagement

Eight in 10 (82 per cent) researchers carried out at least one form of public engagement in the past year, according to a new study launched today (2 December) at the Engage conference in Bristol. The study Factors affecting public engagement by researchers was commissioned by a consortium of 15 UK research funders and Universities UK including the Royal Society, led by the Wellcome Trust. 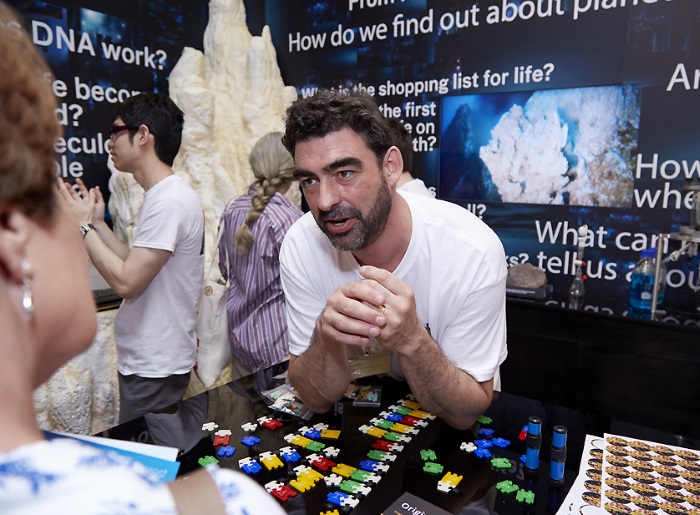 Dr Nick Lane, a biochemist and writer from UCL, speaks to a member of the public at the Royal Society Summer Science Exhibition.

The study found that participation in public engagement was higher among researchers in the arts, humanities and social sciences (AHSS) at 88 per cent, than in science, technology, engineering and mathematics (STEM) at 78 per cent. AHSS researchers were also more likely to value it as a core component of their role (52 per cent compared to 37 per cent of STEM).

However since the last study into this area in 2006**, the number of STEM researchers who value public engagement as a core component of their role has risen from 28 to 37 per cent. The proportion of STEM researchers who would like to engage more with the public has also increased from 45 per cent to 53 per cent and they also feel better equipped to engage with the public than they did in 2006 (up from 51 per cent to 63 per cent).

64 per cent of researchers from all disciplines who have been in their careers for 10 years felt that encouragement from their institution had increased in the last decade. Despite these changes there are still significant obstacles to researchers undertaking public engagement. Competing pressures on time emerged as the biggest barrier to researchers undertaking public engagement (61 per cent). Other barriers included difficulty accessing relevant opportunities (26 per cent) and insufficient funding (26 per cent).

Dr Jeremy Farrar, Director of the Wellcome Trust, said: “I believe that it is vital for researchers to engage with audiences outside their research.  The Wellcome Trust knows that public engagement is an integral part of the business of doing research and we welcome the contribution that this work provides in clarifying what we need to do next to take public engagement to the next level.”

Professor John Womersley, the Research Councils UK Public Engagement with Research Champion and Chief Executive of the Science and Technology Facilities Research Council, added:  “Over the last 10 years, the Research Councils and other research funders have made significant investments to create a research culture where public engagement is better valued, recognised and supported.  As a result, I’m delighted that researchers clearly now realise the benefits of engaging the public, especially through the value it can add in improving the quality of their research and report a significant increase in institutional support.”

Dame Julia Goodfellow, Vice-Chancellor of the University of Kent and President of Universities UK, which has supported the research programme funded by the Consortium, said: “We’re pleased about the commitment towards public engagement shown by the higher education sector. It is clear that attitudes have shifted but we recognise that more needs to be done. We look forward to discussing this with interested parties in 2016.”

The report ‘Factors affecting public engagement by researchers’ is available to read at www.wellcome.ac.uk/PERSurvey