Entries for the 2016 Royal Society Science Books Prize, the world’s leading science books prize, are being accepted from today 20 January 2016. 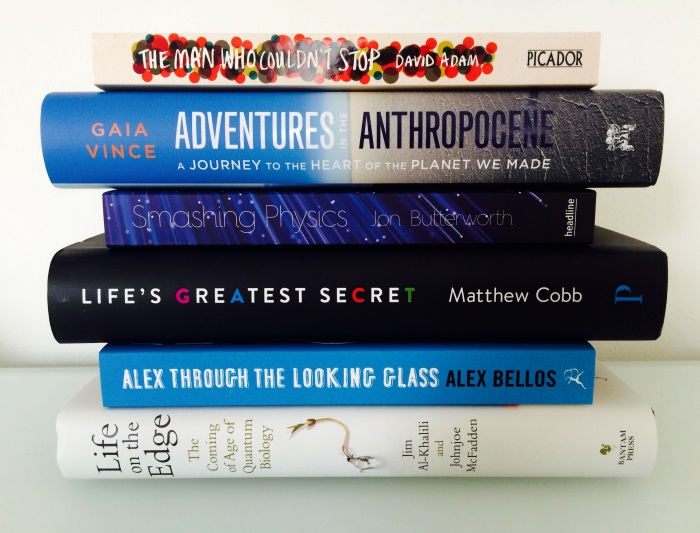 The books shortlisted for the prize in 2015.

The 2016 Royal Society Science Books Prize will celebrate the best of 2016’s new popular science writing for a general adult readership. The Prize is open to science books written for a non-specialist audience. The winner will receive £25,000 and the authors of the shortlisted books £2,500.

The Royal Society is currently looking for a partner or sponsor to help expand the Prize.

Books submitted for the prize must have been published for the first time in English during 2015 and be available to buy in the UK. Full details of the prize’s regulations and eligibility criteria and the entry form are available.

An online entry form must be completed for each entry, and seven non-returnable copies of each entry submitted to the Royal Society Science Books Prize, 6-9 Carlton House Terrace, London, SW1Y 5AG, UK by Friday 8 April 2016.

In 2015 the Prize celebrated its first solo female winner with Gaia Vince’s book Adventures in the Anthropocene.

Founded in 1988 (and previously known under different banners including the Aventis Prize, Rhône-Poulenc Prize and Winton Prize), the Prize celebrates outstanding popular science books from around the world and is open to authors of science books written for a non-specialist audience. Over the decades it has championed writers such as Stephen Hawking, Jared Diamond, Stephen Jay Gould, Robert Winston and Bill Bryson.

The 2016 Royal Society Young People’s Book Prize, which will celebrate the best books that communicate science to young people, first published in English in the calendar year of 2015, is currently also open for application. The deadline for entries is 10 February 2016.