Deep water corals glow in the dark to survive 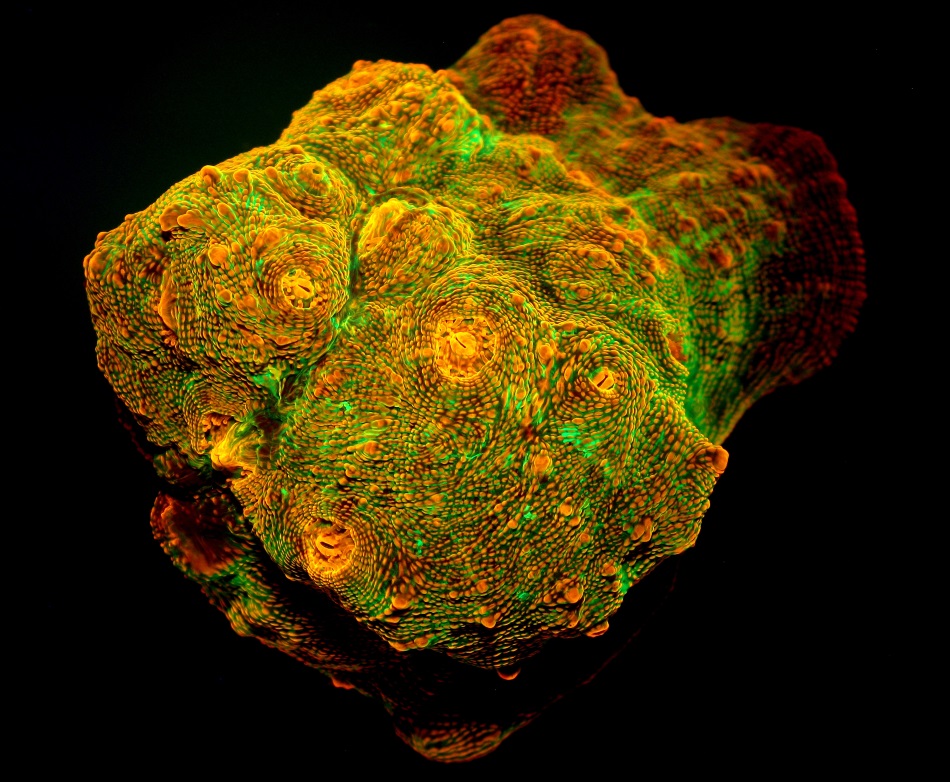 Fluorescence of the the reef coral Echinophyllia sp. The orange-red fluorescence of its photoconvertible protein pigments enhances the light penetration within the tissue containing photosynthetic symbionts. (Image E. Smith)

Corals in shallow waters glow because of fluorescent proteins that act as sunblock, protecting the endangered species from the sun’s intense rays. Now scientists from the University of Southampton have found that corals in deep water are fluorescent for the exact opposite reason – to absorb the little light there is for the benefit of photosynthetic microorganisms that provides most of the coral’s energy needs. The group is displaying their research at this year’s Royal Society Summer Science Exhibition and publishing their work in this week’s issue of Proceedings of the Royal Society B.

Corals and microscopic algae called zooxanthellae have a mutually beneficial relationship where the tiny algae gain shelter, carbon dioxide and nutrients while corals get photosynthetic products that can provide them with up to 90% of their energy needs.

Sunlight is one of the most important resources these corals need to survive, yet they can be found ranging from shallow waters where sunlight is abundant to water as deep as 165m, where little sunlight reaches them. The little light that reaches these depths is almost all in the blue spectral range, the other colours having been reduced in intensity by the water column.

Too much sunlight is not only a bad thing for humans but for corals as well. Some shallow water corals produce fluorescent proteins to block excessive sunlight that could harm the zooxanthellae. However, this doesn’t explain why numerous corals in deep waters are also brightly fluorescent.

Working with scientists from the Interuniversity Institute for Marine Sciences of Eilat and the University of Haifa, Israel, researchers from the University of Southampton set out to resolve why deep water corals glow. They analysed how well different light colours spread through dense layers of zooxanthellae, the microscopic algae vital to coral survival.

They found that corals survive in deep water by making a special type of fluorescent protein that captures blue light and reemits it as orange-red light, which has the potential to penetrate deeper into the coral’s tissue and promotes the photosynthetic capacity of the zooxanthellae.

The team also simulated deep water light environments in their experimental coral aquarium and found that brightly red fluorescent corals had a better chance of survival in the long run compared to their non-pigmented counterparts. This matched the distribution of corals in the Red Sea, where the team found that corals with these special red fluorescent pigments became more abundant in deep water.

Professor Jörg Wiedenmann, head of the Coral Reef Laboratory at the University of Southampton said: “This is an important step forward in understanding how the mysterious fluorescent pigments in corals work. Our finding help us to understand how the amazing diversity of coral colours structures the communities on coral reef.

“Deep water habitats are discussed as potential refuges for corals from the increasingly degraded shallow water reefs. Our work shows that the ‘deep blue sea’ may not be the welcoming sanctuary our endangered coral reefs can retreat to without consequence. It becomes clear that corals need special features to adjust to life in these low-light depths for the benefit of their vital photosynthetic partners and not all shallow water corals might be able to use this escape route. It is of utmost importance we do our best to keep their homes in shallow water habitable”.

Aside from lending the stunning colours to corals, fluorescent proteins also have important applications for human health. By glowing green, yellow and red under a blue light, these proteins enable scientists to make important discoveries in cancer and HIV research by lighting up living cells so they can be seen under a microscope. Scientists are on the hunt for new fluorescent proteins, particularly those glowing at the far-red end of the light spectrum which are easier to detect than green fluorescent proteins in tissue made up of many cell layers. Visitors to the Royal Society Summer Science Exhibition will be able to learn about the value of fluorescent corals, anemones and bio-engineered bacteria from the University of Southampton team at the Glowing Corals exhibit on 4-9 July 2017.

“Coral reef survival is dangerously threatened by climate change and human activity. Reef organisms can provide us with potential life-saving tools and products, so we need to act now and protect this pharmaceutical treasure chest,” adds Professor Jörg Wiedenmann. “Conservation organisations like Blue Ventures will play an increasingly important role in safeguarding these precious corals which are of immense value to humankind.”