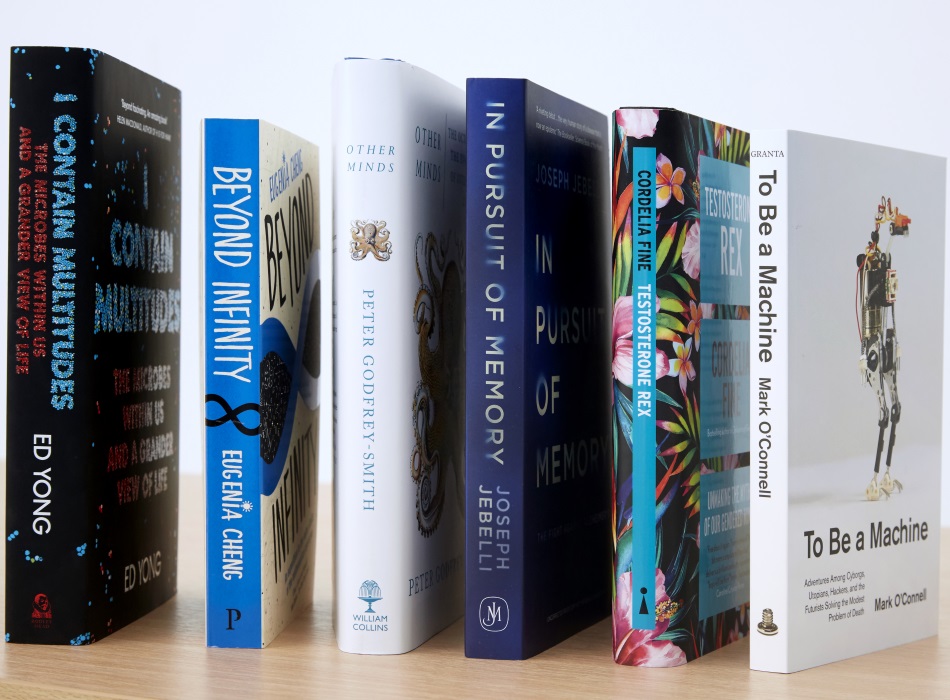 The Royal Society reveals the shortlist for the Royal Society Insight Investment Science Book Prize 2017, celebrating the best of science writing for a non-specialist audience.

This year’s six-strong 30th anniversary shortlisted books provide a fascinating insight into some of the biggest questions facing us today. The shortlisted authors include two practising scientists (Eugenia Cheng and Joseph Jebelli), a psychologist and a philosophy professor (Cordelia Fine and Peter Godfrey-Smith) and two writers with journalism backgrounds (Mark O’Connell and Ed Yong).

Joseph Jebelli’s compelling debut, In Pursuit of Memory, which explores the difficulty scientists face in finding a cure for Alzheimer’s is up against Cordelia Fine’s explosive study of gender politics, Testosterone Rex, which weighs up the latest evidence to debunk the myth that the inequality of the sexes is hardwired. Mark O’Connell’s To Be a Machine looks wryly at the age-old human quest to live longer and better and the latest fixes, from exosuits to cryogenics. Peter Godfrey-Smith’s Other Minds, a close-up look at the octopus, is a fascinating examination of intelligent life on our own planet. On the subject of infinity, international maths sensation Eugenia Cheng’s Beyond Infinity takes readers on a hugely enjoyable journey into the world of maths to reveal the inner workings of infinity. Lastly, Ed Yong’s I Contain Multitudes looks at our internal ecosystems in a fascinating study of the millions of microbes that live within us.

The judges praised the way these books changed their perceptions of the world as well as the creative techniques used to marry scientific discovery with an engaging narrative which readers will want to pass on to others.

The full 2017 shortlist is (in order of author surname):

“We are thrilled with the variety and breadth of this shortlist. These books explore new frontiers, both internally and as far as infinity. They grapple with the big questions of our time: what it is to be human; gender politics; ageing. It takes great courage and skill to face those complex and forbidding subjects and to convey them in such a comprehensive and enjoyable manner.

“The perfect science book marries scientific breakthrough with elegant, engaging communication. Reading these books side-by-side, we were struck by how creative and unique each voice was, and the varied ways these writers tackle their subjects, using metaphors and personal stories as much as scientific facts.”

On what the judges were looking for, Naomi Alderman commented:

“It's a terrible shame that arts and sciences are so often seen as mutually opposed, and that there's so little understanding of what makes great work in 'the other' culture. So many of the most urgent problems that face us today can only be solved by thinking in an interdisciplinary way. We're looking both for great science and excellent writing and storytelling. There's no reason that a science book can't be a bloody good read.”

Founded in 1988, the Prize celebrates outstanding popular science books from around the world and is open to authors of science books written for a non-specialist audience. Over the decades it has championed writers such as Stephen Hawking, Jared Diamond, Stephen Jay Gould and Brian Greene and last year’s winner Andrea Wulf.

The 2017 winner will be announced at an evening ceremony on Tuesday 19 September and will receive a cheque for £25,000, with £2,500 awarded to each of the five shortlisted authors. Professor Brian Cox OBE FRS, the Royal Society’s Professor for Public Engagement in Science, will host the awards ceremony.

The Royal Society has also marked the 30th anniversary with a public poll to reveal the most inspiring work of science writing of all time. In July, Richard Dawkins’ The Selfish Gene was announced as the most popular choice from a selection of 11 inspiring books chosen by Keith Moore, Head of Library at the Royal Society. Also included were Bill Bryson’s 2003 book A Short History of Nearly Everything and Charles Darwin’s 1859 classic On the Origin of Species, which came in second and third place respectively. Interestingly, whilst The Selfish Gene came out top of the pre-selected list, many of the 1,309 participants chose books that did not appear on the top 11, with the poll sparking animated discussion about the merits of books from Carl Sagan’s The Cosmos (1980) to Hope Jahren’s Lab Girl (2016).