An image capturing the icy sugar cube formations of Antarctica has won first place in the Royal Society Publishing photography competition. The award, now in its third year, celebrates the power of photography to communicate science and shows the beautiful images discovered whilst exploring our world. 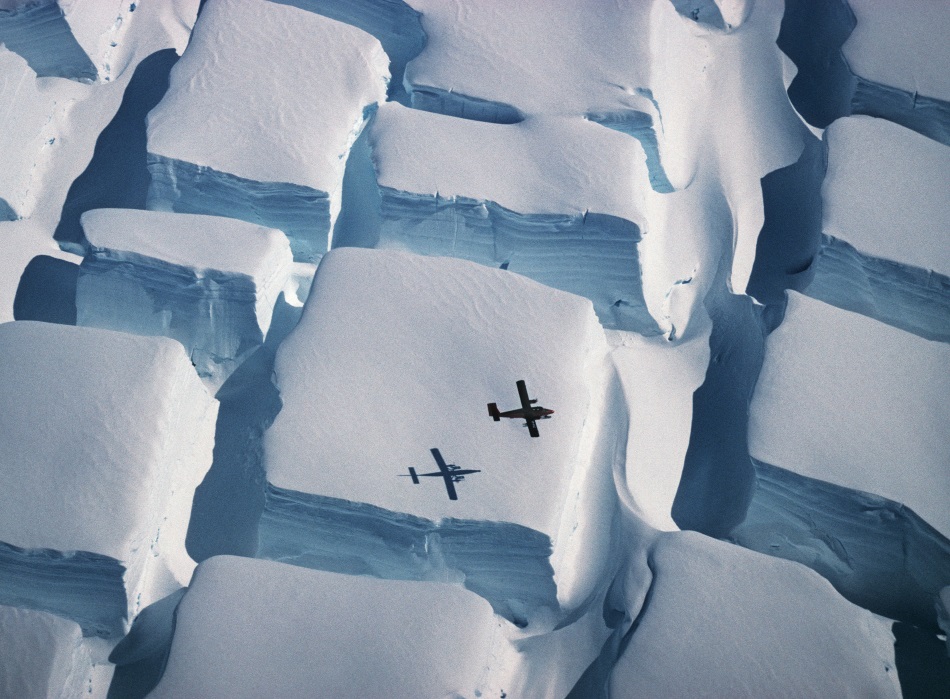 The winning shot, by Peter Convey, a polar ecologist with the British Antarctic Survey, is also the judges’ top pick in the Earth Science and Climatology category. Convey captured an Antarctic ice sheet being stretched in opposite directions with a Twin Otter plane flying overhead for scale.

The photo was chosen from over 1,100 entries by a judging panel of experts for its skill in capturing the sheer scale of the Antarctic and the unique formation of bi-directional crevassing.

The photo was taken in early 1995 during a flight over the English Coast (southern Antarctic Peninsula) roughly 74 degrees south, with a Pentax ME Super camera and 70-300 mm zoom on Kodachrome 64 slide film.

Winner Peter Convey said: "It's been an incredible privilege to work in the Antarctic for nearly 30 years now, every time I go there it takes my breath away. As a terrestrial ecologist, originally specialising in insects, you wouldn't think the inland areas of the continent could hold much scientific promise, but you would be so wrong!

“While this photo was of a breathtaking glaciological feature way beyond my own discipline, I had the chance to take it because I was on a flight to make the first biological surveys of a group of inland nunataks. Even today, very few biologists have had chance to visit such inland areas across the continent, yet the biology we find there has driven fascinating new insights into the biogeography and antiquity of the few terrestrial groups that survive - in short, they have been there tens of millions of years or more, surviving throughout multiple glacial cycles where we previously thought all life would have been wiped out. Such findings are driving entirely new cross-disciplinary interactions between biology, glaciology and geology in trying to better understand the evolution of Antarctica."

Judge Ulrike Muller, one of the four judges said: “The winning image epitomizes the aims of this competition - celebrating the power of photography to communicate science.  The image shows the stunning beauty of a rare geological phenomenon, bi-directional crevassing in an ice sheet, and invites the viewer to wonder at the scale and the mechanisms creating such patterns.”

Four other stunning photos were singled out by the judges as winners in their categories, with the colder climes and wildlife of the arctic regions proving popular subjects in three of the four categories.