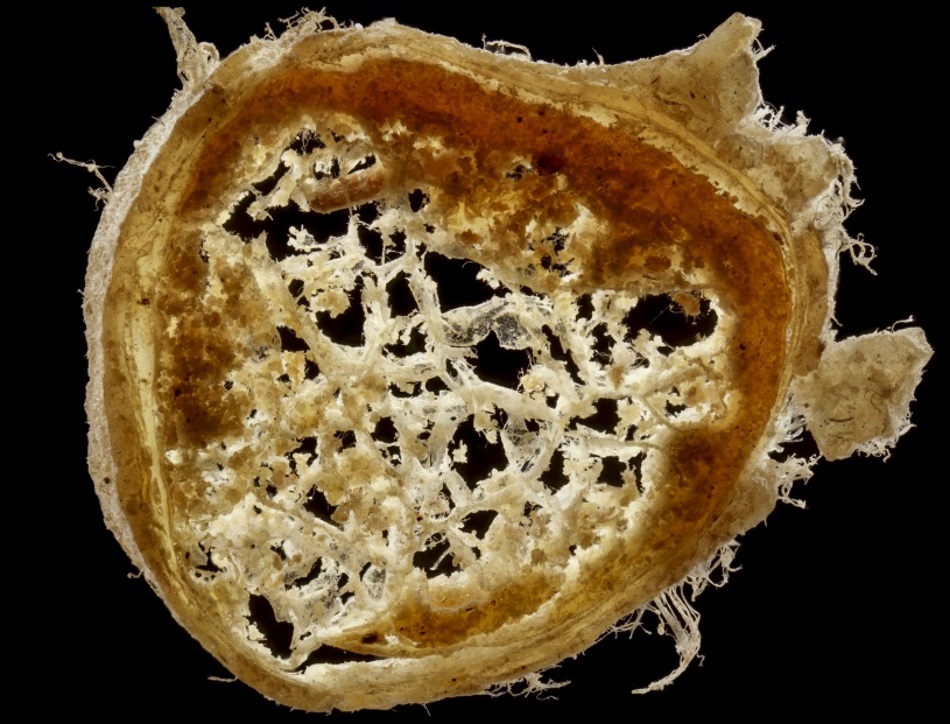 What may be the earliest surviving objects seen by microscope – specimens prepared and viewed by the early Dutch naturalist Antoni van Leeuwenhoek – have been reunited with one of his original microscopes for a state of the art photoshoot. This event allowed science historians to recapture the ‘look’ of seventeenth century science, recording the moment in digital films and with stunning high-resolution colour photographs for the first time.

Delft-based naturalist Antoni van Leeuwenhoek was one of the first generation of serious microscope users, famous for his high-powered single-lens instrument that enabled him to see the natural world down to the scale of some large bacteria. As evidence for his 1670s and 1680s observations, narrated in letters to the London’s Royal Society, he sent a variety of specimens: cows’ optic nerves, sections of cork and elder, and ‘dried phlegm from a barrel’.

In September 2019, these materials, in their original packages, flew back across the North Sea from the Royal Society to Leiden and the Rijksmuseum Boerhaave—the Dutch national museum of the history of science and medicine—where they were reunited with an original Leeuwenhoek microscope. The museum provided the opportunity for taking photographs through the original microscope, as well as the shooting of moving images.

Science and art historian Dr Sietske Fransen, former 'Making Visible' postdoc and now Leader of the Max Planck Research Group 'Visualizing Science in Media Revolutions' at the Bibliotheca Hertziana - Max Planck Institute for Art History orchestrated the event. She conducted readings of Leeuwenhoek’s letters, while photographer Wim van Egmond and Rijksmuseum Boerhaave curator Tiemen Cocquyt were entrusted with the exceedingly delicate operation of filming through the priceless original silver microscope. In combining words and images, the team hope to arrive at a better understanding of Leeuwenhoek’s groundbreaking observations and his use of artists to capture microscope views.

Professor Sachiko Kusukawa is the Principle Investigator of ‘Making Visible’, a four-year project based at the University of Cambridge dedicated to understanding the illustrative practices of the early Royal Society. She said of the photoshoot: “This event is a result of a network of scholars brought together by the ‘Making Visible’ project, an interdisciplinary research project supported by the Arts and Humanities Research Council of the United Kingdom. It shows what can be achieved through true European collaboration, thanks to the Royal Society, Rijksmuseum Boerhaave, the University of Cambridge (CRASSH) and the Bibliotheca Hertziana – Max Planck Institute for Art History.”

Amito Haarhuis, Director of the Rijksmuseum Boerhaave, commented: "With his microscopes Van Leeuwenhoek opened a whole new world, the microcosmos. He made it possible to see things that no human being had seen before. Thanks to this wonderful project and thanks to the latest technology, we are finally able to see in full detail what Van Leeuwenhoek might have seen 350 years ago. We couldn't be more excited!"

Keith Moore, the Royal Society’s Librarian said: “Our first colour views of the sections cut by Leeuwenhoek’s razor, with the lens made by the same hand, was a heart-stopping moment. The Royal Society will look forward to sharing the excitement with audiences in the run-up to the anniversary of this great Dutch scientist in 2023.”

The specimens under the lens were: