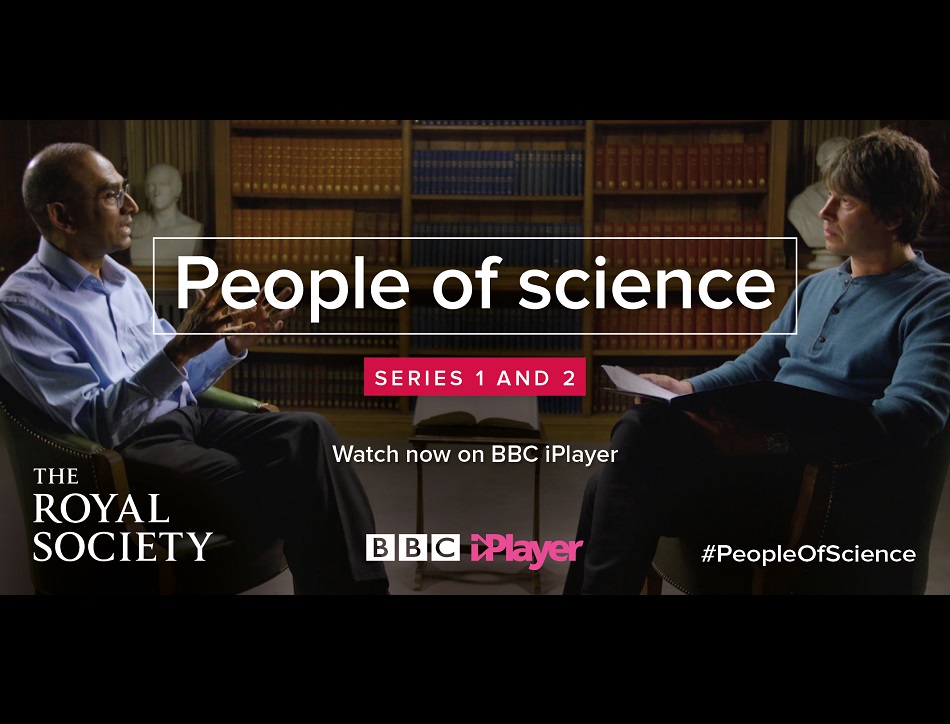 Professor Brian Cox returns to host season two of the Royal Society’s People of Science with all twelve episodes, including those from season one, available to watch on BBC iPlayer from 5 December 2019. Season two follows the success of season one, which launched with Sir David Attenborough’s historic reading of Darwin’s On the Origin of Species.

Each episode features Professor Cox in conversation with a guest Fellow of the Royal Society who draws from centuries of Royal Society Fellows and other researchers to describe the life and work of those luminaries who inspired them. Scientific pioneers are profiled in—and outside—their academic pursuits, from familiar names such as Alan Turing who, it turns out, was an Olympic-calibre long-distance runner, to other lesser known figures such as Max Perutz, who doggedly pursued the 20,000-atom structure of haemoglobin in a bike shed-turned laboratory over the course of 23 years.

Professor Brian Cox, The Royal Society Professor for Public Engagement in Science, said, “Isaac Newton once said that ‘If I have seen further it is because I have been standing on the shoulders of giants’ and science is always about building on what we already know.  That is why it is important to look back and to celebrate the giants whose work laid the foundation for science past, present and future. There is real joy in exploring and celebrating the lives and work of these amazing people and the archives of the Royal Society are a treasure trove of insights.”

Sandra Gorel, Editorial Executive for BBC iPlayer, said, “We’re delighted to be bringing the second series of the Royal Society’s People of Science with Professor Brian Cox to BBC iPlayer. Brian Cox is the perfect host to shine a light on some of our most influential scientists in an accessible and engaging manner. We’re also bringing back the first series so viewers get another chance to see eminent contributors, such as Sir David Attenborough, reveal the scientists who inspired them.”

Dame Wendy Hall, computer scientist, begins the series by painting a picture of Alan Turing—the father of modern computing—as not just a mathematical genius who defined the theory of computing, but also one who excelled in the outdoors, almost qualifying for the 1948 Olympics. His theories are still taught today and his insights as forward-facing as ever, prompting Wendy to add of Turing’s technological prescience: “we’re moving into the world of quantum [computing]; I bet he would have been there before all of us”.

Professor Richard Fortey, palaeontologist and geologist, recounts the biography of fellow geologist, Charles Lyell, whose 19th century career formalised the field of geology, endowing it with “scientific credibility…giving it a scientific basis”. Before this, Richard says, the Earth was seen to be eternal and unchanging: “nobody [before Lyell] had begun to think in scientific terms how mountain ranges could be formed…Lyell could do a crude estimate of how old the world was, and it would immediately go into millions”. These findings were foundational with regard to the work of Darwin, his contemporary, “Lyell made time available to Darwin, if you like, so that he could understand [the time-scales of] how organismic evolution could happen”.

Venki Ramakrishnan, molecular biologist and President of the Royal Society, praises molecular biologist and inspiration Max Perutz who “founded the field of structural biology…and gave us our first glimpse of what a protein looks like”. Perutz set out on the mammoth task of solving the 20,000-plus atomic structure of the red blood cell’s functional molecule, haemoglobin, a feat made clear when compared with the previous record of 100 atoms. It’s no surprise then that the project took 23 years and, having no stable funding, necessitated Perutz and a colleague “build a hut over a bicycle shed [to conduct their research]”. The pair overcame the unlikely to describe haemoglobin, earning them the Nobel Prize for Chemistry. Max went on to found Cambridge’s Laboratory of Molecular Biology, whose resulting research has gone on to earn a further 12 Nobel Prizes.

Professor Martin Rees, former President of the Royal Society, discusses the wide-reaching achievements of Joseph Rotblat, 20th century physicist and peace activist who worked on the historic nuclear weapons-testing programme, the Manhattan Project, along with other leading physicists of the day. Referring to the expertise and confidentiality lock-down of the Manhattan Project, Rees reveals “the literature on nuclear physics has a sudden blackout in 1941…they’d all gone to work on the Manhattan Project”. Soon thereafter, the horror of nuclear warfare raw in Joseph’s mind, he and a group known as the Pugwash conference banded together to make the forceful case for their disarmament, eventually earning them the Noble Peace Prize in 1995.

Dame Ottoline Leyser, plant geneticist, describes the work of geneticist Barbara McClintock and her two major discoveries: providing “definitive proof that genes are on chromosomes… and developing the concept of jumping genes”, the conversation taking place on either side of a rose whose marbled petals are the result of just such jumping genes. Ottoline tells of the initial sceptical reception to McClintock’s research, a reception that led to McClintock’s withdrawal from the scientific community that lasted until, finally, “she did indeed get the recognition she deserved in the form of the Nobel Prize for Medicine or Physiology as the sole winner”, a rare achievement.

Professor Joanna Haigh, atmospheric physicist, discusses Lewis Fry Richardson, a pacifist, visionary and one of the first meteorologists, who pursued a system for forecasting weather and whose equations underpin modern forecasting. Richardson was a conscientious objector, which landed him in the ambulance service when World War II broke out, and formally precluded him from holding a university post. Even so, Richardson still pioneered and envisioned extraordinary science outside mainstream academia, like his imagined “‘forecast factory’…long before there were any computers,” a giant spherical construction inhabited by thousands of workers computing atmospheric solutions to predict the weather.

After premiering for national audiences on BBC iPlayer, People of Science will be available internationally from the 6 January 2020 with all twelve episodes hosted on YouTube and the Royal Society’s website, an opportunity to once again catch the first-time pairing of Sir David Attenborough and Professor Brian Cox on screen together for the first time as they discuss Darwin in season one’s opening episode. From 6 January 2020, some of the archive items featured in each film can be explored on Google’s Cultural Institute.