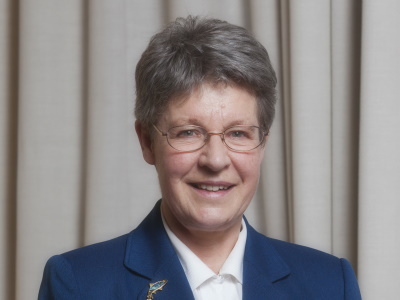 She is one of 26 medal and award winners, who are recognised for their exceptional research and outstanding contributions, from advancing quantum computing, revolutionising prenatal testing, and challenging racist pseudoscience.

Dame Jocelyn is recognised for her work on the discovery of pulsars, one of the major astronomical advances of the 20th century.

She becomes the second woman to be awarded the Copley Medal, joining past winners including Charles Darwin, Albert Einstein and Dorothy Crowfoot Hodgkin.

Dame Jocelyn said: “I am delighted to be the recipient of this year’s Copley Medal, a prize which has been awarded to so many incredible scientists.

“With many more women having successful careers in science, and gaining recognition for their transformational work, I hope there will be many more female Copley winners in the near future.

“My career has not fitted a conventional – male – pattern. Being the first person to identify pulsars would be the highlight of any career; but I have also swung sledgehammers and built radio telescopes; set up a successful group of my own studying binary stars; and was the first female president of the Institute of Physics and of the Royal Society of Edinburgh.

“I hope that my work and presence as a senior woman in science continues to encourage more women to pursue scientific careers”.

The award includes a £25,000 gift which Dame Jocelyn will add to Institute of Physics' Bell Burnell Graduate Scholarship Fund, providing grants to graduate students from under-represented groups in physics.

This year also sees the awarding of a new prize, the Royal Society Rising Star Africa Prize, in memory of Paul O’Brien FRS.

The prize recognises early-career research scientists based in Africa who are making an innovative contribution to the physical, mathematical and engineering sciences and includes a £14,000 research grant as well as a cash gift.

Dr Nowsheen Goonoo was awarded the inaugural prize for her work developing new biomaterials. Based at the University of Mauritius her work makes use of locally available resources, such as biodegradable dressings for diabetic foot ulcers derived from seaweed.

Sir Adrian Smith, President of the Royal Society, said: “Through its medals and awards the Royal Society recognises those researchers and science communicators who have played a critical part in expanding our understanding of the world around us.”

“From advancing vaccine development to catching the first glimpses of distant pulsars, these discoveries shape our societies, answer fundamental questions and open new avenues for exploration.

“On behalf of the Royal Society I congratulate each of our award winners and thank them for their work.”

Dame Jocelyn Bell Burnell DBE FRS, for her work on the discovery of pulsars, one of the major astronomical discoveries of the 20th century.

Professor Michelle Simmons AO FRS, for seminal contributions to our understanding of nature at the atomic-scale by creating a sequence of world-first quantum electronic devices in which individual atoms control device behaviour.

Professor Michael Green FRS, for crucial and influential contributions to the development of string theory over a long period, including the discovery of anomaly cancellation.

Professor Dennis Lo FRS, for the discovery of foetal DNA in maternal plasma, developing non-invasive prenatal testing, and making foundational contributions for other types of liquid biopsies. He has made a major impact on pre-natal diagnosis.

Royal Medals are awarded on behalf of the Queen each year and have been issued annually since 1825. Previous recipients include Francis Crick, Mary Lyon and Fred Sanger.

Professor Anne Neville OBE FREng FRS, for her innovative research into corrosion and tribology and the successful application of this to wide-ranging, real life, engineering problems.

Dr Adam Rutherford, for his contribution to strengthening public confidence in science through radio, TV, films, talks and books, and in particular, for challenging racist pseudoscience.

Dr Serena Nik-Zainal, for enormous contributions to understanding the aetiology of cancers by her analyses of mutation signatures in cancer genomes, which is now being applied to cancer therapy.

Professor Magda Titirici, for her outstanding contributions to advancing the sustainability of energy storage and conversion technologies by performing interdisciplinary research at the interface between electrochemistry, materials science and chemical engineering.

Professor Sophie Scott CBE FBA FMedSci, for her work in engaging the public with neuroscience through events, talks, TV and radio, and exemplifying how science communication can enhance scientific excellence.

Professor Yvonne Rogers, for contributions to Human-Computer Interaction and the design of human-centred technology.

Dr Suzanne Imber, for her achievements in the field of planetary science and her well-considered project proposal which will support young girls to pursue physics with free-to-access space camps.

Professor June Barrow-Green, for her research in 19th and 20th century mathematics, notably on historical roots of modern computing, dynamical systems and the three-body problem. Her work places special emphasis on the under-representation of women in historical narratives and in contemporary mathematics.

Professor Anne Ferguson-Smith FMedSci FRS, for her pioneering work in epigenetics, her interdisciplinary work on genomic imprinting, the interplay between the genome and epigenome, and how genetic and environmental influences affect development and human diseases.

Professor Dolph Schluter FRS, for major and fundamental contributions to the understanding of the how species originate, adaptive radiations develop, and geographical patterns of biodiversity emerge and are maintained.

Professor Malcolm Levitt FRS, for his contributions to the theory and methodology of nuclear magnetic resonance, including composite pulses, symmetry-based recoupling, long-lived nuclear spin states, and the study of endofullerenes by electromagnetic spectroscopies and neutron scattering.

Professor Frances Kirwan DBE FRS, for her research on quotients in algebraic geometry, including links with symplectic geometry and topology, which has had many applications.

Professor George Warimwe, for his work on zoonoses vaccine development, capacity building in Africa, and his innovative research proposal.

Professor Stephen Davies, for his long and successful record in converting brilliant academic ideas to commercial successes with world impact in the biotech sector.

Dr Nowsheen Goonoo, for her work on the fabrication, characterisation and application of biomaterials, and her innovative research proposal using locally-sourced seaweed to create a self-dissolving dressings for diabetic foot ulcers.

The full list of medals and awards, including their description and past winners can be found at royalsociety.org/grants-schemes-awards/awards.