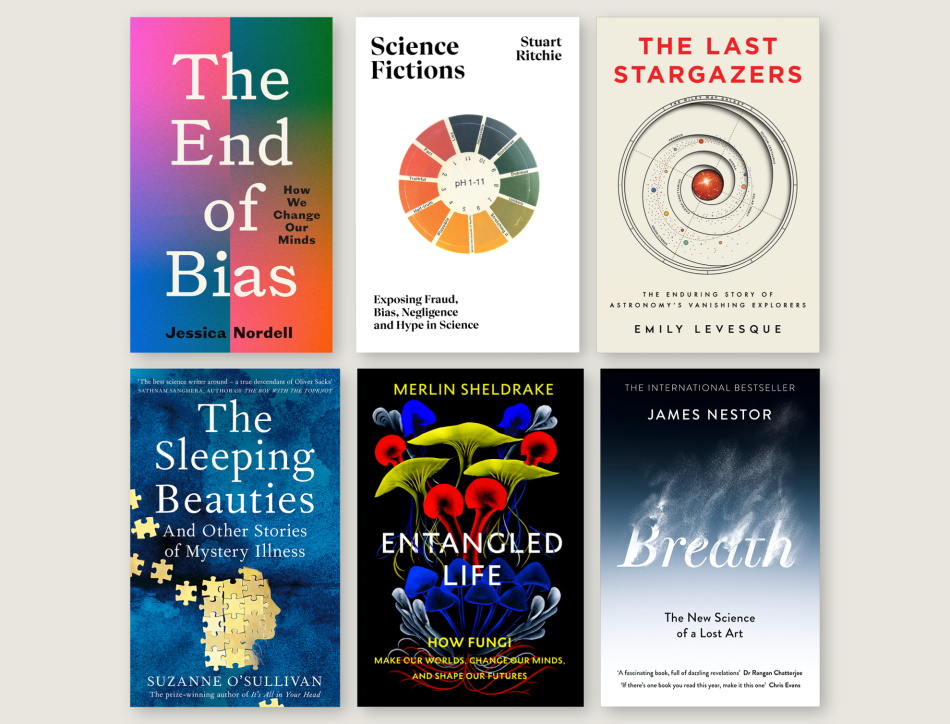 The Royal Society has revealed the shortlist for the Royal Society Science Book Prize 2021, sponsored by Insight Investment. This year’s shortlisted books, chosen from a record number of 267 submissions, demonstrate the breadth, depth, accessibility, and joy of the best popular science writing from all over the world.

Two debut authors make the 2021 shortlist in journalist James Nestor and science and culture journalist, Jessica Nordell. They are joined by astronomer Emily Levesque and neurologist Suzanne O’Sullivan. Psychologist Dr Stuart Ritchie and biologist and writer Merlin Sheldrake complete the six-strong list, from which a winner will be chosen in November.

The full 2021 shortlist is (in order of author surname):

“This year’s shortlist reflects more than ever the huge strength and diversity of topics evident in science writing. Every book is very accessible to all, and each in its own way is quite remarkable. The topics range from an account of what it’s like to be a woman in the field of astronomy (which also conveys the enduring fascination we have with the stars), why breathing optimally is so important for our health and well-being, the scientific basis of why we are so biased when it comes to our views, the related topic of fraud and bias in science, mystery illnesses and, finally, the fascinating world of fungi.

“Each is important and compelling, conveying the wonder of science but also highlighting issues that we should all be concerned about. Important, accessible science writing is certainly alive and well with this enthralling list of titles.”

Two books take a closer look at the worlds beneath our feet and beyond Earth’s atmosphere. In The Last Stargazers, Emily Levesque reveals the hidden world of stargazing, celebrating the ingenuity and curiosity of the profession, instilling cosmic awe in the reader. In Merlin Sheldrake’s Entangled Life, our perspective shifts from the galactic to the fungal, taking the reader on a guided tour of the hidden world that supports and sustains nearly all living systems.

A further two books deal with the human body, its remarkable systems but also its endless mysteries. Breath by James Nestor explores one of biology’s most basic functions, upending what we think we know about breathing and demonstrating how over thousands of years we have learned to do it wrong, with devastating consequences. In Sleeping Beauties, Suzanne O’Sullivan investigates a series of disparate diagnostic mysteries: psychosomatic illnesses, or medical disorders apparently caused as much by factors of the mind as by the body.

The final two titles set their sights on the limitations and fallibility of scientific practice, highlighting how these can impact our societies and imagining how we might improve them. Science Fictions by Stuart Ritchie reveals how bias, mistakes and even outright forgery can influence everything from austerity economics to anti-vaccination movements, proposing vital remedies. In The End of Bias, Jessica Nordell delves into the cognitive science and social psychology underpinning efforts to create change, and meets some of the pioneers developing new practices, from mindfulness-adopting police to lawyers and educators striving to embed quality from the playroom to the boardroom.

A third of the books on the shortlist come from independent publishers, while Penguin Random House has three nominated titles.

For 33 years, the Prize has promoted the accessibility and joy of popular science writing. It has celebrated some truly game-changing reads: books that offer fresh insights on the things that affect the lives we lead and the decisions we make, from neurodiverse perspectives on everyday living (Explaining Humans by Dr Camilla Pang, 2020) to gender bias (Invisible Women by Caroline Criado Perez, 2019) and the harms humans are wreaking on the planet (Adventures in the Anthropocene by Gaia Vince, 2015, and Six Degrees by Mark Lynas, 2008). In 2021, the judges renew their search for the most compelling science writing of the last year, at a time when the power of effective science communication is valued more highly than ever before.

The winner of the 2021 Royal Society Science Book Prize, sponsored by Insight Investment, will be revealed at a ceremony in London on 29 November. They will receive a cheque for £25,000, with £2,500 awarded to each of the five shortlisted authors.

To be an astronomer is to journey to some of the most inaccessible parts of the globe, braving mountain passes, sub-zero temperatures, and hostile flora and fauna. Not to mention the stress of handling equipment worth millions. It is a life of unique delights and absurdities… and one that may be drawing to a close. In The Last Stargazers, Emily Levesque reveals the hidden world of the professional astronomer. She celebrates an era of ingenuity and curiosity, and asks us to think twice before we cast aside our sense of wonder at the universe.

Emily Levesque is an astronomy professor at the University of Washington. She has won the American Astronomical Society’s Annie Jump Cannon Prize and been named an Alfred P. Sloan Research Fellow in Physics. She is the author of two academic works on astrophysics and has written for Physics Today. She lives in Seattle.

‘The Last Stargazers is perfect for anyone who has ever wondered what it's like to actually be an astronomer, or who has dreamt of staring up at the stars. Amidst the stories of mishaps and mistakes is a surprisingly romantic view of the glory of exploration, taken one dark night at a time.’  Dr Chris Lintott, BBC Four - The Sky at Night

Breath: The New Science of a Lost Art by James Nestor (Penguin Life)

There is nothing more essential to our health and well-being than breathing: take air in, let it out, repeat twenty-five thousand times a day. Yet, as a species, humans have lost the ability to breathe correctly, with grave consequences. Drawing on thousands of years of medical texts and recent cutting-edge studies in pulmonology, psychology, biochemistry, and human physiology, Breath turns the conventional wisdom of what we thought we knew about our most basic biological function on its head.

‘A fascinating scientific, cultural, spiritual and evolutionary history of the way humans breathe —and how we’ve all been doing it wrong for a long, long time.’ – Elizabeth Gilbert, author of Big Magic and Eat Pray Love

The End of Bias: How We Change Our Minds by Jessica Nordell (Granta Books)

Drawing on 10 years’ immersion in the topic of unconscious bias, Jessica Nordell digs deep into the cognitive science and social psychology that underpin efforts to create change, and introduces us to the people who are practising a range of promising methods: the police using mindfulness to regulate high-stress situations; the doctors whose diagnostic checklists help eliminate bias in treatment; the lawyers and educators striving to embed equality all the way from the early-years playroom to the boardroom.

Jessica Nordell is an American science and culture journalist. A former writer for public radio and producer for American Public Media, she studied physics at Harvard University and poetry at the University of Wisconsin. She has been researching and writing on unconscious bias for almost a decade and her work has appeared in the Atlantic, New Republic and New York Times, among other publications. She lives in Minneapolis, Minnesota. The End of Bias is her first book.

‘Despite revolutions in our understanding of bias, we're still much better at documenting the problem than solving it. When it comes to prevention and cure, Jessica Nordell's powerful book is a breakthrough. With state-of-the-art science and gripping narratives, she reveals steps that individuals, groups, and institutions can take to fight prejudice.’ ¬– Adam Grant, author of Think Again

The Sleeping Beauties: And Other Stories of Mystery Illness by Suzanne O’Sullivan (Picador)

Inspired by a poignant encounter with the mysterious sleeping refugee children of Sweden, Suzanne O’Sullivan travels the world to visit other communities who have also been subject to outbreaks of so-called ‘mystery’ illnesses. O’Sullivan hears remarkable stories from a fascinating array of people, and attempts to unravel their complex meaning while asking the question: who gets to define what is and what isn’t an illness?

Dr Suzanne O’Sullivan has been a consultant in neurology since 2004, first working at the Royal London Hospital and now as a consultant in clinical neurophysiology and neurology at the National Hospital for Neurology and Neurosurgery. She specializes in the investigation of complex epilepsy and also has an active interest in psychogenic disorders. Suzanne’s first book, It's All in Your Head, won both the Wellcome Book Prize and the Royal Society of Biology Book Prize and her critically acclaimed Brainstorm was published in 2018. She lives in London.

Science is how we understand the world. Yet failures in peer review and mistakes in statistics have rendered a shocking number of scientific studies useless – or, worse, badly misleading. Such errors have distorted our knowledge in fields as wide-ranging as medicine, physics, nutrition, education, genetics, economics, and the search for extraterrestrial life. As Science Fictions makes clear, the current system of research funding and publication not only fails to safeguard us from blunders but actively encourages bad science – with sometimes deadly consequences.

Dr Stuart Ritchie is a Lecturer at the Institute of Psychiatry, Psychology and Neuroscience at King’s College London and winner of the 2015 ‘Rising Star’ award from the Association for Psychological Science. He has written for The Times, Spectator, Washington Post, Wired, Literary Review and Aeon, and has appeared on BBC Radio 4 programmes The Infinite Monkey Cage, More or Less and Bringing Up Britain. He lives in London.

‘We should listen to this warning about how neophilia and hype is ruining research... Ritchie has a gift for turning boring statistical processes into thrilling detective stories.’ – The Times

Entangled Life: How Fungi Make Our Worlds, Change Our Minds and Shape Our Futures by Merlin Sheldrake (Bodley Head)

The more we learn about fungi, the less makes sense without them. They can change our minds, heal our bodies and even help us avoid environmental disaster; they are metabolic masters, earth-makers and key players in most of nature's processes. In Entangled Life, Merlin Sheldrake takes us on a mind-altering journey into their spectacular world and reveals how these extraordinary organisms transform our understanding of our planet and life itself.

Merlin Sheldrake is a biologist and a writer. He received a Ph.D. in Tropical Ecology from Cambridge University for his work on underground fungal networks in tropical forests in Panama, where he was a predoctoral research fellow of the Smithsonian Tropical Research Institute. He is a musician and keen fermenter. Entangled Life is his first book. He lives in London.