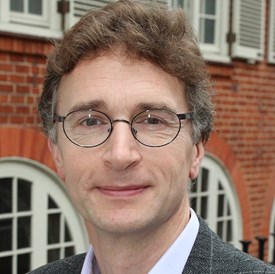 Professor Andrew Millar FRS, FRSE, Chief Scientific Adviser for Environment, Natural Resources and Agriculture, provides independent science advice to Scottish Government on issues such as the environment, agriculture and the wider rural economy and champions the use of evidence to inform policy development and delivery.  This is a part-time position (3 days a week) and Professor Millar retains an academic position at the University of Edinburgh.

Andrew Millar is an interdisciplinary biologist. He was elected an EMBO member, FRS and FRSE between 2010 and 2013 for his research on the biological clock in plants.

Andrew grew up in Luxembourg before studying at Cambridge University and The Rockefeller University, New York. After postdoctoral research at the NSF Center for Biological Timing in Virginia, he joined the University of Warwick, before moving to the University of Edinburgh in 2005.

His past roles include: founding the SynthSys - Centre for Synthetic and Systems Biology; and serving as Theme Director of Systems Biology in the Scottish Universities Life Science Alliance (2007-2009), and P.I. for GARNet (2004-2009), which represents roughly 200 laboratories of the UK’s plant research community.

He is currently Chair of Systems Biology at the University of Edinburgh and Associate Director of SynthSys and was, until his secondment, Director of Research for the School of Biological Sciences. He is also a member of BBSRC Council.