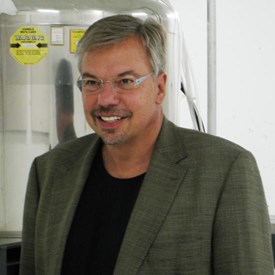 John Vederas is a chemist who has made significant contributions to the fields of bioorganic and medicinal chemistry. John is developing new and improved methods for the chemical synthesis of biologically active molecules, as well as performing studies of enzymatic reaction mechanisms.

His novel approaches for stable isotope detection in biomolecules have had a major impact on the elucidation of fungal biosynthetic pathways. This includes the biosynthesis of polyketides, secondary metabolites that are the basis for a host of important drugs. He also discovered nontoxic antimicrobial peptides that proved important for food preservation and show potential for therapeutic use in humans.

John has published over 300 papers, edited 4 books and obtained 21 patents. In addition to awards for excellent teaching, he has received a number of research recognitions, including Fellow the American Academy of Microbiology (2014), the Chemical Institute of Canada Medal (2008), the Lemieux Award (2002) and the Alfred Bader Award (2005). He is Chair-elect of the Chemical Institute of Canada, the umbrella organisation for Canadian chemists and chemical engineers.