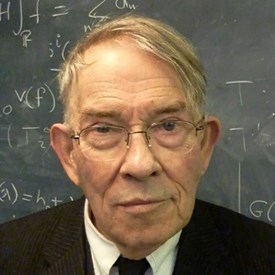 Walter Hayman is a mathematician who has produced a collection of valuable and wide-ranging work that spans almost all areas of complex analysis. The author of five influential textbooks, he is perhaps best known for his fundamental work on the theory of functions.

Over the course of his career, Walter has made many outstanding contributions to the study of functions of a complex variable, notably providing solutions to some of the most famous problems in the field. Foremost amongst these is the so-called asymptotic Bieberbach conjecture, for which he provided a definitive proof in 1955. He also co-founded, with Margaret Hayman, the British Mathematical Olympiad.

The author of over 200 scientific papers, Walter has won many of the most prestigious accolades in his field, including election to some of the world’s leading scientific societies. He has received honorary degrees from universities in four countries, and was the dedicatee of a special 2008 volume of the international mathematics journal, Computational Methods and Function Theory.