The Long Road to the Higgs Boson - and Beyond

The discovery of the Higgs boson at CERN’s LHC accelerator in 2012 by the ATLAS and CMS collaborations was the culmination of a decades-long search that had started in 1964 with the proposal of this unique particle, a signature of the origin of the masses of elementary particles. The Higgs boson completes the Standard Model that describes successfully all the visible matter in the Universe, but its discovery leaves unanswered many questions: is ‘empty’ space unstable? what is the origin of the matter in the Universe? what is the dark matter? This talk introduced how experiments at future runs of the Large Hadron Collider (LHC) and other proposed accelerators may be able to answer these and other questions in fundamental physics.

The Bakerian Lecture series began in 1775 and is the premier lecture in the physical sciences. Professor John Ellis CBE FRS was awarded the 2015 Bakerian Award for his ground breaking contributions in the physics of the Higgs boson and his attempts at unifying the fundamental forces of nature through his work with the LHC. 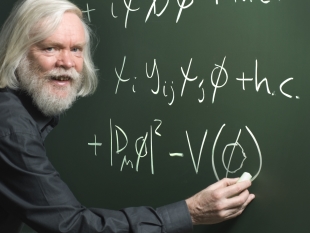