Can you spare 10 minutes to help us improve our website?
Yes I can helpNo thanks
Skip to content
Transforming our future

On 22 May 2015, the Royal Society launched a new series of unique, high-level conferences to address the major scientific and technical challenges of the next decade. Breakthrough Science and Technologies: Transforming our Future conferences will feature cutting-edge science from industry and academia and bring together leading experts from the wider scientific community, industry, government, funding bodies and charities.

The first conference was on the topic of machine learning and was organised by Dr Hermann Hauser KBE FREng FRS and Dr Robert Ghanea-Hercock. We were delighted to host a high profile line-up of speakers including a keynote from Professor Geoff Hinton FRS (University of Toronto/Google), and over 150 delegates from across industry, academia, government and the media.

Machine learning now underpins most global economic activity, from search query engines, to big data filtering, through to biotechnology and robotics. The breadth of its applications, including image recognition, speech translation, big data analytics, robotics and healthcare, was clearly outlined by the speakers during the day. Alongside the current state-of-the-art in software, we also heard about future hardware developments in high performance silicon processors, and machine learning as a “killer app” for quantum computing. 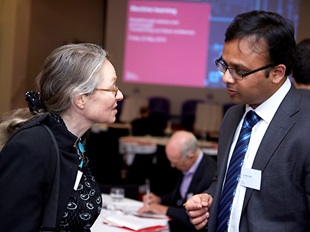 Our panel discussion focused on the longer term social and economic impacts. With over one billion diagnostic tests performed each year in the NHS, Sir Malcolm Grant considered the role of machine learning in analysing the huge datasets produced. Professor Nick Bostrom described the implications of developing “superintelligent” machines, including the benefits but also the existential risk doing so may pose. Professor Nick Jennings argued that in the future humans and machines would need to learn how to better interact and collaborate in order to fully exploit machine learning’s potential.

Overall, the conference showcased machine learning as an emerging technology making rapid progress in a number of industries and applications. Connections between different sectors, such as those formed between delegates during the day, will be a key part of this process.

Videos of the talks will be uploaded on this website in the next month. A report, summarising the key messages from the meeting, will be published later this year.

The conference and speakers were featured in a number of press articles including:

About the conference series

Each conference will focus on one topic and will seek to cover key issues, including:

The conferences will bring together leading experts from across different sectors, who will reflect state-of-the art knowledge from both industry and academic centres of excellence, including major international companies. Discussion will be captured in a conference report that will be used to influence policy and decision makers.

The next conference in the series will be Robotics and Autonomous Systems: Visions, Actions and Challenges and will be held at the Royal Society on Friday 13 November 2015. 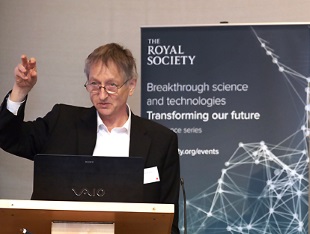 Our keynote speaker, Professor Geoff Hinton FRS (University of Toronto/Google), talked about the history, development and state of the art of deep neural networks.

Dr Robert Hercock is a Chief Research Scientist in the British Telecommunications Security Research Practice. He has over 18 years’ experience in managing security research projects in the UK, and was theme leader for Networks and Cyber Security in the UK MOD Information Fusion Defence Technology Centre. His research interests include Cyber Security, artificial intelligence and Complex Adaptive Systems. He chairs an international workshop on adaptive cyber defence, and has over thirty international publications in AI and security concepts, in addition to twelve filed patents. Robert is a member of the Royal Society's Science, Industry and Translation Committee.

Hermann Hauser is a distinguished science-based innovator and serial-entrepreneur whose ventures have been at the forefront of UK innovation. A major contributor to the global technology and growth agendas and an influential member of senior policy making bodies. An inspiration and role-model for generations of entrepreneurs who has been directly involved in many companies, providing enthusiasm, mentoring, and financing leading to technology based wealth creation at scale.