Can you spare 10 minutes to help us improve our website?
Yes I can helpNo thanks
Skip to content
Scientific meeting

The interaction of fire and mankind - further discussion

The satellite meeting will consist of a smaller number of key players who will be able to take the outcomes from the discussion meeting forward.

This is a invitation only residential conference, which allows for increased discussion and networking.  It is free to attend, however participants need to cover their accommodation and catering costs if required.

Participants are also encouraged to attend the related scientific discussion meeting which immediately precedes this event. 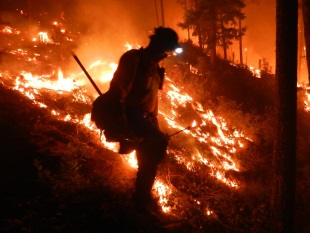 Andrew C. Scott is a Distinguished Research Fellow and Emeritus Professor of Geology in the Department of Earth Sciences at Royal Holloway, University of London. His first teaching post was at Chelsea College, University of London and the department merged with Kings College and Bedford College Geology Departments to form the new Geology Department at Royal Holloway University of London in 1985. He was awarded a personal chair in Applied Palaeobotany in 1996. He held a visiting Professorship at Yale University in 2006-7. His research has dealt with aspects of palaeobotany, palynology, coal geology, petrology and geochemistry for the geological history of wildfire. His work on charcoal in deep time had led to not only an understanding of the role of fire in the Earth System but also involved the use of charcoal in coal as an atmospheric oxygen proxy. He is the lead author of the book “Fire on Earth: An Introduction”.

Bill Chaloner is Emeritus Professor of Botany in the Earth Sciences Department at Royal Holloway, University of London, and Visiting Professor in Earth Sciences at University College, London.  His first teaching post was in Botany at University College, moving to take the Chair of Botany at Birkbeck College, and thence to Bedford College until its merger with Royal Holloway College.  He has held visiting professorships at the University of Nigeria, at Penn State University and at the University of Massachusetts. His research has dealt with the fossil record of the history of plant life on land from the Silurian to the present and the response of plant life to changes in atmospheric composition and climate. He has also explored the relationship between the fossil spore (palynological) record and that of plant macrofossils as a means of elucidating the palaeoecology of the terrestrial environment.

Claire is an Earth scientist specialising in the study of natural fires and the role that they play in regulating the Earth system. She graduated from Royal Holloway University of London with a degree in Geology in 2000. She then undertook an MSc in Micropalaeontology at University College London, graduating in 2001 before returning to Royal Holloway to undertake her PhD. She completed her PhD in 2005 entitled "Assessing the evidence for extensive wildfires at the Cretaceous-Tertiary Boundary" and has continued to build on this fiery start ever since.

She then moved to University College Dublin to work at the Programme for Experimental Atmospheres and Climate (PEAC) facility where she focused on the relationship between ancient wildfires and variations in palaeoatmospheric composition. In 2010 she moved to The University of Edinburgh to hold a unique position joint between BRE Centre for Fire Safety Engineering and the School of Geosciences. Since January 2012 she has been a Senior Lecturer in Earth System Science at the University of Exeter. Claire is the team leader of a 1.52 million euro European Research Council Starter Grant that seeks to understand the impact of plant evolution on wildfires in ancient ecosystems. Her research is internationally recognised for integrating state-of-the-art modern experimental methods into studies of Earth’s ancient past, an approach which is well highlighted by her recently published edited book "Fire Phenomena and the Earth System an Interdisciplinary Guide to Fire Science".

Chris Roos is an environmental archaeologist and Assistant Professor in the Department of Anthropology, Southern Methodist University, and is a Faculty Associate of the Laboratory of Tree-Ring Research at the University of Arizona. His primary research investigates multi-century to multi-millennial dynamics of human-fire-climate relationships to inform contemporary fire management discussions. For the past decade, he has been directing interdisciplinary archaeological and paleoecological research programs in the Southwestern United States to evaluate how traditional land-use by American Indian hunting and farming communities altered the vulnerability of fire-prone dry conifer forests to severe droughts. In addition to his Southwest US projects, he has active human-fire-climate research projects in the Republic of Fiji and in the North American Great Plains.