Can you spare 10 minutes to help us improve our website?
Yes I can helpNo thanks
Skip to content
Panel discussion

Gems of Ramanujan and their lasting impact on Mathematics

Ramanujan's findings fundamentally changed modern mathematics, and will be unveiled at the Royal Society's public lecture.

Ramanujan's work has had a truly transformative effect on modern mathematics, and continues to do so as we understand further lines from his letters and notebooks.

In this lecture, some of the studies of Ramanujan that are most accessible to the general public will be presented and how Ramanujan's findings fundamentally changed modern mathematics, and also influenced the lecturers' work, will be discussed.

Manjul Bhargava is the R. Brandon Fradd Professor of Mathematics at Princeton University. He is recognized worldwide as one of the leading experts in Number Theory.  Professor Bhargava has received numerous awards and honors for his work, including the SASTRA Ramanujan Prize, the Packard Fellowship, the Clay Research Award, the AMS Cole Prize, the Fermat Prize, the Infosys Prize, Election to the US National Academy of Sciences, and Election to the Indian National Science Academy (2014). In addition, Professor Bhargava has also won numerous awards for his teaching, public lectures, and exposition, including the Derek Bok Award, the Vanguard Fellows Award, and the Merten Hasse Prize. In August 2014, Professor Bhargava was awarded the Fields Medal, considered the highest honour in mathematics.

Ken Ono is the Asa Griggs Candler Professor of Mathematics and Computer Science at Emory University. He has authored over 150 research papers, as well as 5 books. His work includes ground-breaking results in Number Theory. He has received numerous awards and honors, including a Levy Prize, Sloan Fellowship,a Presidential Career Award from President Clinton, a Packard Fellowship, and a Guggenheim Fellowship. He is a Fellow of the American Mathematical Society, and he is a member of the US National Committee for Mathematics at the US National Academy of Sciences. In addition to his research accomplishments, Ono is also a master lecturer and teacher as evidenced by his receipt of the 2005 National Science Foundation Director's Distinguished Scholar Award. He has recently been named the George Polya Distinguished Lecturer by the Mathematical Association of America.

Attendance to this event is free.

Places are limited so please register to attend by emailing the events team with the names of those who wish to attend.

Find out about travel and accessibility information. 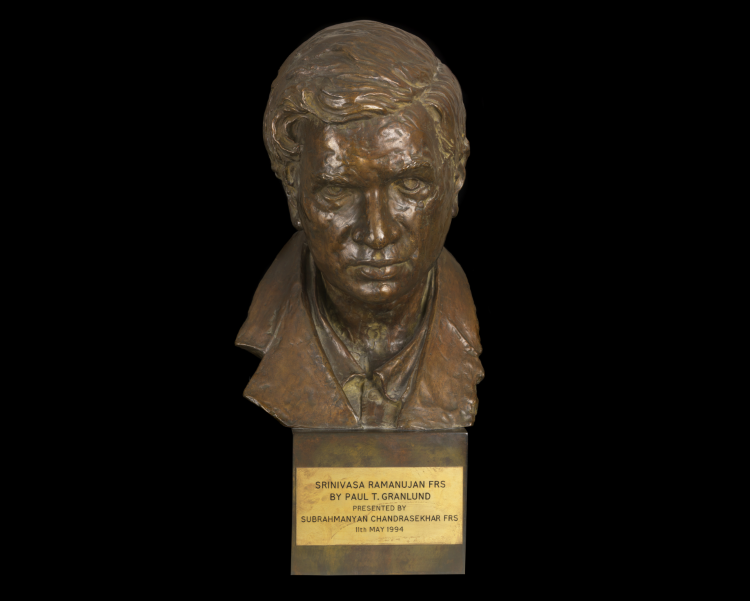 Bust of Srinivasa Ramanujan by Paul Granlund, 1983 ©The Royal Society