This event has concluded but you can view some of the sessions below.

This year’s annual diversity conference will explore how inclusive environments can be created and maintained within science, technology, engineering and mathematics (STEM), in order to maximise innovation, creativity, and career progression for all.

This event has concluded but you can view some of the sessions below.

This year’s annual diversity conference will explore how inclusive environments can be created and maintained within science, technology, engineering and mathematics (STEM), in order to maximise innovation, creativity, and career progression for all.

View a Storify of the day's social media

With the Royal Society’s strategic commitment to increase diversity in STEM, the need for inclusivity is all too evident.  The Society believes that it has a particular responsibility to ensure that diversity and inclusion are embedded across all of its activities and is part of the culture of the organisation.  Our annual diversity conference brings you organisations and individuals who are specialists in inclusive environments to give us the tips and tricks that we need to create and sustain our own inclusive environments.  They will guide us into a workshop on how you can create your own inclusive environment in order to build and develop a world in which studying and working in science are open to all.

Bonnie Greer OBE, Chancellor of Kingston University is a distinguished writer and broadcaster, whose intellectual interests embrace the worlds of arts and science with equal fervour.

This conference has now concluded.

Please contact the diversity team at diversity@royalsociety.org if you have any queries.

Find out more about Diversity at the Royal Society on our website. 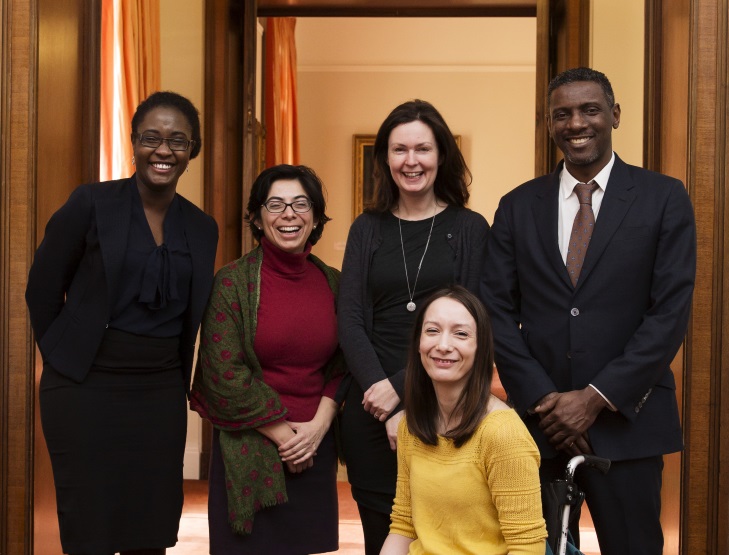 Kevin worked within policing for 30 years, much of this time connected to diversity activity.  He played a leading role in developing the Metropolitan Police's approach to diversity and inclusion. Kevin has significant experience of the aftermath of Stephen Lawrence’s murder and subsequent inquiry. He helped to deliver fundamental changes to policing that came about as a result. He was awarded the Queen's Police Medal in the 2006 NY Honours List. He was involved in the delivery of the London 2012 Olympic and Paralympic Games, described as the most inclusive ever. Kevin currently manages diversity and inclusion at Network Rail.

Alex has worked at Stonewall since April 2013, helping to manage our Diversity Champions programme and support organisations to develop inclusive workplaces for their LGBT staff, service users and customers. As part of the programme Alex supports a team of account managers and works with organisations such as Tate, Macmillan and Royal Holloway University, sharing best practice and encouraging them to think of new and innovative ways to make sure that their staff’s sexual orientations and gender identities are not a barrier in their career development.

Specialising in Race Equality, Workforce Representation, Unconscious Bias and Inclusive Leadership,   Maxine Hurley is currently a Member Engagement Manager at the Employers Network for Equality & Inclusion (enei).  Here Maxine works closely with a range of public, private and third sector organisations supporting them to deliver inclusive working practices.  Prior to joining enei Maxine enjoyed a successful career providing Equality & Diversity solutions for the Royal College of Nursing.  Maxine is a skilled Public Speaker, Group Facilitator and Trainer, named by the Health Service Journal in their inaugural list of the top 100 BME Pioneers in Healthcare.

Dr Lesley Thompson joined Elsevier in 2016 as Director Academic & Government Strategic Alliance in the UK. Prior to joining Elsevier, Lesley worked for 26 years at the Engineering and Physical Sciences Research Council, EPSRC, the largest of the UK’s 7 Research Councils. In 2006 she was appointed Research Director, and made responsible for the strategy and delivery of the scientific programme, with an annual budget of 800 M UK pounds. As Research Director she was responsible for driving the quality of the research portfolio as well as fostering the collaboration with industry. EPSRC’s collaboration with industry grew from 12 to 54% from 1994 to 2015 while the international research standing grew ensuring the portfolio delivered Excellence with Impact. During her time in EPSRC, Lesley introduced a number of innovations including; Ideas Factories, designed to encourage radical thinking with funding available to enact research following a sandpit in a research area; Discipline Hopping enabling academics to take time out in another discipline and cohort based doctoral training growing the investment of 2 centres in 2001 to 115 centres in 2014. She has always championed early career researchers, interdisciplinary research and diversity. She is a member of the Royal Society Diversity group and in January 2016 was awarded an MBE for services to research. Lesley has a PhD in Biology from the University of Essex and is married with 2 children.

Paul Sesay is the Founder/CEO of The National Diversity Awards, The Excellence in Diversity Awards, The Diversity Group, The BEAM Awards and events company I Spoil U Media since 2006. Paul’s business acumen has mainly been with a social focus. With over ten years worth of experience within the Diversity, Equality and Inclusion sector, Paul has worked with some of the largest organisations in the world on their diversity and inclusion profiles. He has also worked within local communities to help people from various backgrounds to achieve and empower disadvantaged groups throughout the UK. Paul’s vision is to integrate diversity as it should be viewed, and that every single individual has a fair and equal chance to go for that desired career without inhabitation, and be successful.

Sarah Dickinson Hyams leads the strategic development of, and oversees all work relating to, the delivery of ECU’s equality charter schemes, comprising Athena SWAN, which recognises advancement of gender equality, and the race equality charter mark.

Prior to joining the ECU, Sarah worked at the University of Cambridge where she managed the Women in Science Engineering and Technology Initiative (WiSETI), a positive action gender equality project aiming to improve the recruitment, retention and promotion of women in STEMM.

Sarah also previously worked at the Royal Society of Chemistry (RSC) where she developed the RSC's programme on good practice and diversity.

Paul Walton obtained his PhD degree in 1990, followed by two years as a NATO postdoctoral fellow at the University of California, Berkeley, working with Ken Raymond. He joined the department of chemistry at York in 1993 as a lecturer, becoming full professor in 1999. Between 2004 and 2010 he was chair of department when it became the first department in the UK to win an Athena SWAN gold award. He is recipient of the Royal Society of Chemistry's Higher Education Teaching Award and the RSC's Joseph Chatt Award for outstanding multidisciplinary research.  He has also been editor of Dalton Transactions (2004-2008), chair of Heads of Chemistry (UK) and chair of the Royal Society of Chemistry's Diversity Committee. He is a strong advocate of gender equality and lectures widely on the subject.

Bonnie Greer is an award winning author and playwright, born in Chicago. She has lived and worked in London for the past 25 years.

Recent projects include “Yes” an opera,  which premiered at the Royal Opera House Covent Garden in November 2011, "48:Greco/Davis" as part of the London Jazz Festival  (2009) and "Marilyn And Ella" which ran at The Apollo Theatre  West End in November 2009, after a sold-out run at the Edinburgh Festival in 2007. “Marilyn and Ella” is currently being translated into German, French and Croatian. She has had over a dozen plays produced over BBC Radio including a translation and adaptation of "The Little Prince", and her documentary "In Search Of The Black Madonna".  On BBC2 in 2002 her influential documentary  "Reflecting Skin" charted the presence of the African In Western European art. She has been a theatre critic for "Time Out" and writes occasional pieces on the arts for The Times, The Guardian, The Daily Telegraph, The Independent and The Huffington Post. She is a regular guest on "Newsnight Review" and its current incarnation, "The Review Show”. She is a Trustee of the Serpentine Gallery; a member of the Council and Artistic Advisory Committees of the Royal Academy of Dramatic Art; (RADA) ;  a member of the Franco British Council and Deputy Chair of the Board of Trustees of the British Museum.

She was awarded an OBE for services to the arts in the Queen’s Birthday Honours in 2010.