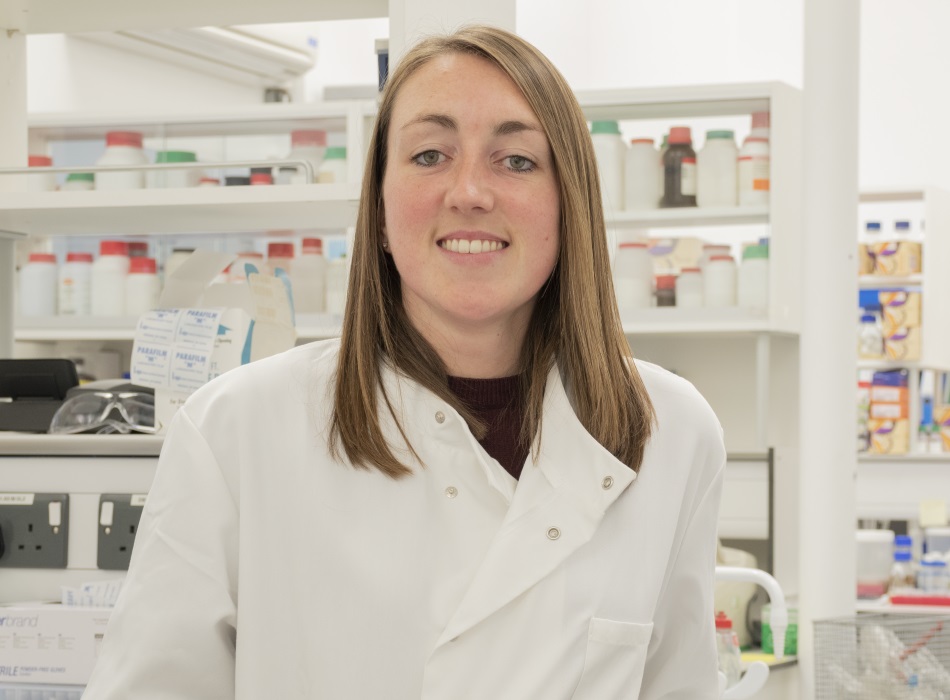 Profoundly deaf from birth, Clare Halliday often doubted she’d be able to achieve the career in STEM she wanted. But with growing confidence, the right team and a great opportunity, she’s now studying for a PhD – something she never thought possible.

Clare Halliday was 15 when she set her heart on a future career in biology.

‘Science was my strongest subject, and from that age onwards I knew I wanted to work in health and disease. I thought being a researcher was too complex for me, and then I got hooked on documentaries about tropical diseases, so I thought that diagnostic scientist would be my career choice.’

Clare was born profoundly deaf but gained some hearing aged one, through a cochlear implant in her right ear. She attended a mainstream primary school, before boarding at the Mary Hare Grammar School for deaf children from age 11.

‘When I was younger I thought it was normal not to be included, but at Mary Hare everything was set up and it was easy. It opened up that world of inclusion.’

As Clare realised the possibilities for inclusion, it highlighted situations in which life without hearing was more difficult. While she had clear aspirations and interests, she worried about how she would cope with her disability in the future.

‘I started to realise that I did struggle to fit in with my tennis club back at home, and began to hate going to training. When I was studying for my A Levels at Mary Hare I worried about how I would cope at a normal university, and after that how I would get and hold down a job.’

Coping in the wider world

Despite her nerves, Clare took the plunge and enrolled at the University of Southampton, completing a science foundation year, followed by a BSc in Biomedical Sciences. She had government funding for a note-taker who joined her in lectures, and sign language interpreters in labs.

‘The work itself wasn’t a problem. Access to lectures and practicals wasn’t a problem. The social side was tough. I hadn’t really developed the skills to socialise in the wider world – it was like going out to mix with a different species! I was so nauseous on the first day, but it did get easier, and I didn’t have the homesickness to worry about like some students did.’

With her bachelor’s degree under her belt, Clare completed an MSc in Medical Diagnostics at Cranfield University, before entering the world of work.

‘I worked as a diagnostic technician on livestock viruses for two years, then as a healthcare scientist working on human respiratory viruses. The jobs gave me more confidence in participating in meetings and speaking up if I didn’t catch something, but the diagnostic work was repetitive, and I was getting a little bored.’

With her confidence rising, Clare sought a new challenge. She took a job as a research technician in parasitology at the University of Oxford, and it changed everything.

‘It was the first time I was taken seriously, my opinion counted and I was interested in the research.’

Clare’s team, led by supervisor Jack Sunter and Principal Investigator Keith Gull, took deaf awareness training, which informed a number of adjustments to enable Clare to fully participate and communicate with her colleagues. For instance, the layout of seating in meetings and seminars was changed, and on social occasions the team would always ask Clare where she would prefer to sit.

These experiences showed Clare what was possible, and boosted her confidence so much that she decided to follow Jack Sunter to Oxford Brookes, and embark on a PhD.

‘I’d done my masters hoping to avoid the PhD route, just because I wasn’t fully aware of what a PhD would involve and worried that it would be impossible. But Jack approached me about joining his new lab so I made the move and started my PhD in 2018. Working with the same supervisor who knows what I can and can’t hear is great.’

Clare’s research is in Leishmania parasites – investigating the assembly and structure of a key part that contributes to its pathogenicity.

‘Completing work to localise my candidate proteins for investigation has been a real highlight so far. I’m hoping to publish my literature review early in 2020, which I never thought I’d be doing. Of course, there are challenges like any PhD student has, as well as the challenges that come with being deaf, but I’m really enjoying it – more than I thought I would!’

The main difficulties caused by Clare’s deafness are in networking, following and giving talks. To understand people, she combines lipreading with her limited hearing. She has to sit in the front row and focus hard to follow presentations. Poster sessions or networking in the cacophony of conferences is tough. Clare also has to practice hard for talks.

‘I’m unable to pick up how people pronounce jargon in the field, so I’m always actively practising pronouncing words. Giving talks is usually OK with lots of preparation, but my biggest challenge is the questioning. I struggle to understand strong international and regional accents. I’ve suggested that it would be best if people write down their questions to avoid embarrassment.’

Clare is involved with deaf STEM, which keeps her up to date with new assistive technology and new signs for technical words. In 2017 she attended a conference for deaf scientists on how to bridge the hearing gap in STEM.

Her journey in self-confidence, and in the possibilities that exist, have shaped Clare’s advice to young people with hearing impairment.

‘Hold on to your willpower to power through the hurdles, and most importantly don’t be afraid to speak up about what you can or can’t hear or do. There are ways to make it easier.’