John Dalton (1766-1844) was an English chemist, physicist, and meteorologist, best known for introducing the atomic theory into chemistry and for his work on human optics. Inspired by his own unusual perception of colour, he conducted the first ever research into colour blindness – a subject which subsequently became known as Daltonism. 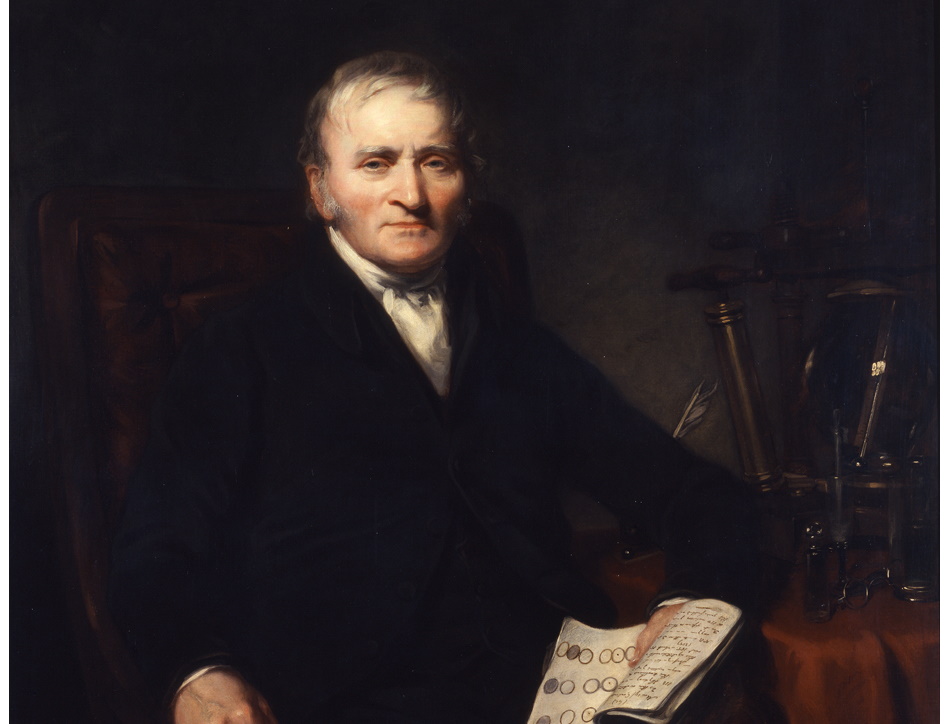 John Dalton was born in 1766, to a modest Quaker family from the Lake District in Cumbria. While he received little formal education, his sharp mind and natural sense of curiosity compensated for a lack of early schooling. At the age of just 12 he joined his older brother in running a local Quaker school, where he remained as a teacher for over a decade.

Dalton had two influential mentors during this time: Elihu Robinson, a rich intellectual with an interest in mathematics and science; and John Gough, a blind classics scholar and natural and experimental philosopher. Both these men inspired in Dalton an avid interest in meteorology that lasted for the rest of his life.

In 1793, Dalton published his first scientific paper: 'Meteorological Observations and Essays'. He was keen to pursue further atmospheric and weather research at an academic institution, but as a Quaker was barred from most British universities at the time, so his mentor Gough pulled a few strings and got him a place as a tutor at Manchester College.

By the time he arrived in Manchester, Dalton had begun to realise that he saw the world differently from most other people, as he wrote in a letter to Elihu Robinson:

"I am at present engaged in a very curious investigation. I discovered last summer with certainty, that colours appear different to me to what they do to others. […] my brother excepted, who seems to see as I do."

Dalton's observation that he and his brother both shared such an anomaly led him to conclude that his unusual colour perception was the result of a hereditary condition. His account of this phenomenon to the Manchester Literary and Philosophical Society in 1794 is the first recorded description of colour blindness, or as it became known, Daltonism.

Over the following years, Dalton conducted extensive research on the subject, culminating in the publication of his 1798 paper, 'Extraordinary facts relating to the vision of colours', in which he proposed that his own colour blindness was the result of his vitreous humour (the jelly-like part of his eye) possessing an abnormal blue tint, thus acting as a filter for certain wavelengths of light.

However, post-mortem examination of his eyes in 1844, performed upon his prior request, revealed their contents to be "perfectly colourless." It was not until 1995, when modern scientists conducted a DNA analysis of his preserved eyeball, that it was revealed he had what is known today as red-green colour blindness, or deuteranopia: a rare form of the condition caused by a missing gene for the receptor sensitive to medium wavelength (green) light (as opposed to deuteroanomaly, which involves a mutated form of pigment).

By the turn of the nineteenth century, the emergence of new experimental techniques enabled Dalton to expand on his early meteorological work; specifically, the absorption of water vapour by air at different temperatures. His subsequent work on the constitution, evaporation and thermal expansion of gases led to his derivation of Dalton’s law of partial pressures, which in turn informed his proposition in 1803 of the modern theory of the atom.

Dalton’s atomic theory suggested that all matter was comprised of indivisible and indestructible atoms with distinct masses and properties, the combination of which determined the physical nature of their constituent elements. While his proposals for some exact formulations were incorrect (he thought that the formula for water was OH, rather than H2O), his ideas were revolutionary and laid the foundations for the development of all modern chemistry.

It was for his work on atomic theory that in 1826, Dalton became one of the first two recipients of the Royal Medal, a prestigious award presented annually by the Royal Society for "the most important contributions to the advancement of natural knowledge."

A life dedicated to science

Dalton continued his scientific investigation into a wide range of subjects until his death in 1844. He remained an active member of the Manchester Literary and Philosophical Society and, from 1822, was a Fellow of the Royal Society; his election citation stated that his "talents, acquirements and exertions are well known to his fellow labourers in the cause of Science".