Born in 1682 to parents of modest means, and blinded by small pox aged one, the odds were stacked against Nicholas Saunderson making a success of his life. However, his exceptional mind and determined character fuelled his rise to one of the highest academic positions in eighteenth century Britain. 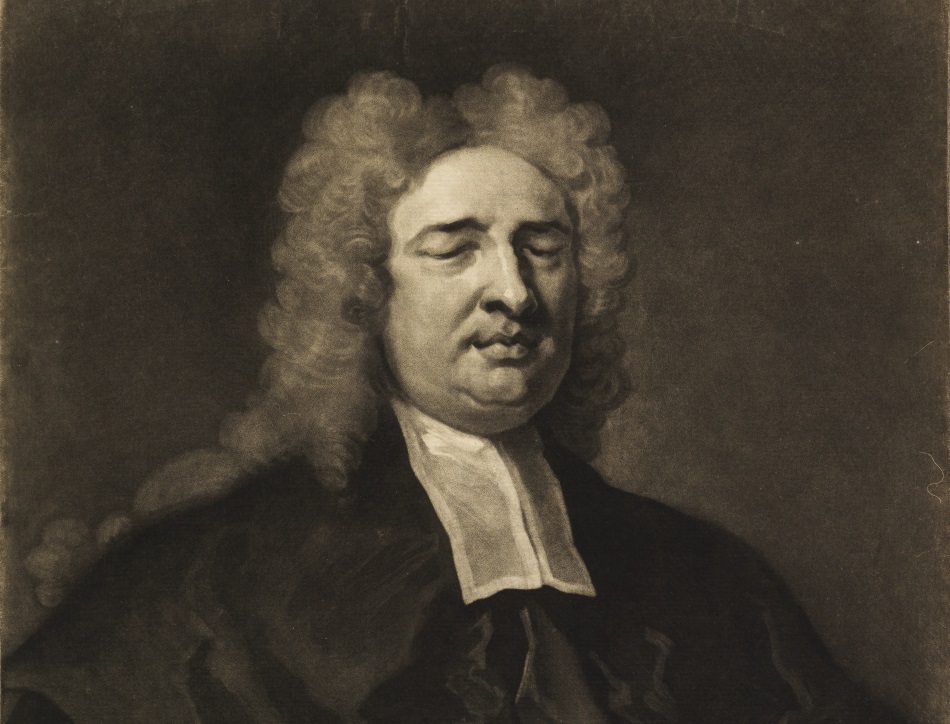 Nicholas Saunderson began his formal education at the Free School in Penistone, Yorkshire, where he learned French and gained a foundation in the classics. As it was more than a century before the invention of braille, his childhood teachers would have had no way to teach him to read. It is said that he taught himself, by tracing engravings on gravestones.

Early tutelage in mathematics came from Nicholas’ father, who worked with numbers every day in his role as an exciseman for the district. His son quickly picked up the rudiments of arithmetic, and began to form new rules to help himself solve arithmetical problems.

Without having the use of a pencil and paper to keep track of calculations, Nicholas made an arithmetic device for himself.  It consisted of a board divided, using thin strips of wood, into 100 small squares. A regular grid of nine holes was punched in each square. Nicholas then devised a system to represent numbers between 0 and 9, using large and small-headed pins stuck into the holes in a square.

Nicholas used this physical tool throughout his life and career. He also constructed a similar device, using silk threads wound around arrangements of pins, to depict and study geometric shapes. Some believe this inspired the invention of modern-day geoboards used in maths teaching.

Supportive of his son’s obvious talent, Nicholas’ father paid for private tutors in algebra and geometry, and subsequently, attendance at Attercliffe Academy near Sheffield. However, Nicholas (now 20) didn’t take to the teaching at Attercliffe and quickly returned home to tutor himself.

Nicholas was a passionate Newtonian; the Royal Society had published Isaac Newton’s ground-breaking Principia Mathematica in 1687. This may have strongly influenced Nicholas’ desire to further himself at university in Cambridge, where his hero had held the Lucasian Chair of Mathematics for the preceding three decades.

However, Cambridge fees were out of the question for the Saundersons, so Nicholas and his friends devised an audacious plan. He would attend Cambridge – one of the most highly regarded mathematical institutions of its day – not as a student, but as a teacher.  It was a risky strategy, but in 1707 Christ’s College welcomed their unusual young guest, and the residing Lucasian Professor of Mathematics, William Whiston, graciously allowed him to take lectures.

It soon became clear that Nicholas was an excellent teacher. He delivered lectures with a style that was clear and easy to follow for all students.

Word spread of this talented and unusual mathematician, and his lectures were quickly full to capacity. Though perhaps some were attracted more by his celebrity than their desire to learn, and didn’t always pay full attention. It’s reported that Nicholas once said that if he was to ‘go to hell, his punishment would be to read lectures in mathematics to the gentleman commoners in that university’.

Nicholas soon became seen by many to be William Whiston’s successor to the Lucasian Chair. In 1711 the position became available, but Nicholas – being without formal qualifications – wasn’t eligible. Following a request by the university, Queen Anne recommended he be awarded an MA, after which he was elected to the prestigious professorship. He remained Lucasian Chair of Mathematics until his death, 28 years later.

Despite not advancing the field of mathematics, Nicholas’ intellect and the clarity with which he could convey concepts to others continued to garner respect and honours. He was elected to the Royal Society in 1718, and in 1728 – during a visit to Cambridge – King George II personally awarded him a degree in law.

In mathematics, Nicholas considered his blindness to be an advantage, because ‘diagrams which are intended only as helps to the imagination, are often the means of misleading the judgement’.

Having lived without sight since infancy, he developed extraordinary abilities of memory and spatial awareness. His contemporaries wrote of his great skill in sensing the size of any room he walked into, and his ability to retrace journeys with incredible detail.

‘…if he ever had walked over a pavement in courts, piazzas, etc, which reflected a sound, and was afterwards conducted thither against, he could exactly tell whereabouts in the walk he was placed…’ by listening to the sound of the pavement.

His skills did not, however, extend to diplomacy. He was passionate and outspoken in his views and he could be frank to the point of offence. These characteristics were said to have made him easier to respect than to like.

Nevertheless, he did have some loyal friends who – after he suffered a life-threatening fever in 1733 – implored him to leave a written record of his teachings. He had had no intention of publishing, but they urged him to do so ‘being unwilling that the labours of so great a man should be lost to the world’.

As such, Nicholas authored two collections of his teachings, which were published shortly after he died in 1739. His textbooks were said to convey the concepts of ancient scholars, such as Euclid and Archimedes, and the doctrines of Newton, more clearly than ever before.