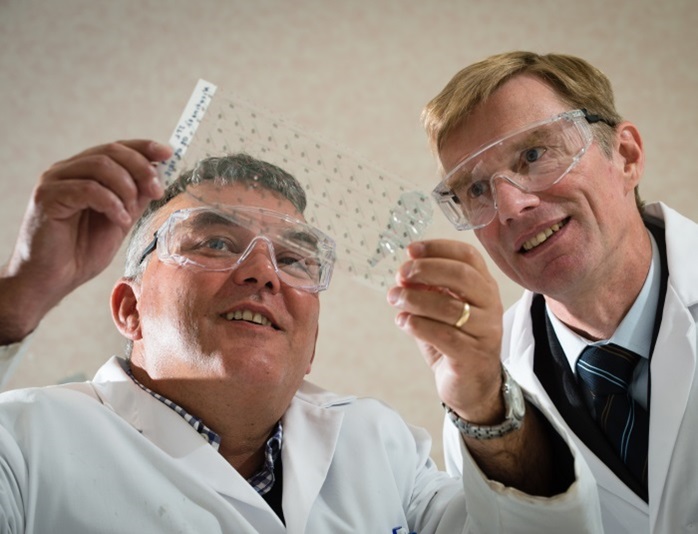 Professor Haddleton first started to collaborate with companies over 20 years ago, using his expertise in polymer chemistry for industrial partners to provide solutions to their real world problems. Over the years, he has been involved in developing new deodorants and hair straightening treatments for Unilever, developing ways to deliver insecticides to crops for Syngenta and producing high-performance automotive lubricants for Lubrizol.

With his latest spinout company, Medherant, he is expanding his horizons to transdermal delivery of drugs through adhesive skin patches. The first patented product from this endeavour covers an ibuprofen patch that delivers a steady dose for up to 12 hours. This is a world first since many currently available over-the-counter pain-relieving patches are heat-generating pads that often contain no active ingredient. Plus, ibuprofen patches are potentially beneficial for patients suffering from conditions like chronic pain, neuralgia and arthritis because they offer high dose, rapid and targeted pain relief without the usual adverse effects from the continued use of oral ibuprofen.

The patches are made by dissolving the drug – up to 30% of the weight of the patch – in an adhesive polymer licensed from Bostik, a leading provider of specialist adhesive. Patches are also being developed for other common painkillers including lidocaine, diclofenac and methyl salicylate. Since the patches are easy to make and are able to contain large amounts of active ingredient, they could also be used for transdermal delivery of prescription drugs as well, even to treat illnesses such as cancer and Alzheimer’s disease. The goal is to “have a suite of different transdermal products.” Professor Haddleton adds:

“We know there is a market out there for our patches. A recent poll in the Metro showed that 96% of people would use a painkiller patch over a pill. Big pharma are also interested and as of now, we are in talks for co-developing products with five of the top ten global pharmaceutical companies.”

Founded in 2014, Medherant was supported in the early stage of its development by Warwick Ventures, the University of Warwick’s commercialisation arm. The company has since secured over £400,000 in seed funding from one of the UK’s leading technology investors, Mercia Fund Management, and business angels. In the next two years, the company hopes to expand its workforce from five to 20 employees and bring the ibuprofen patch on the market. With the global market for transdermal delivery of drugs predicted to reach $31.5 billion by 2015, the future is promising.