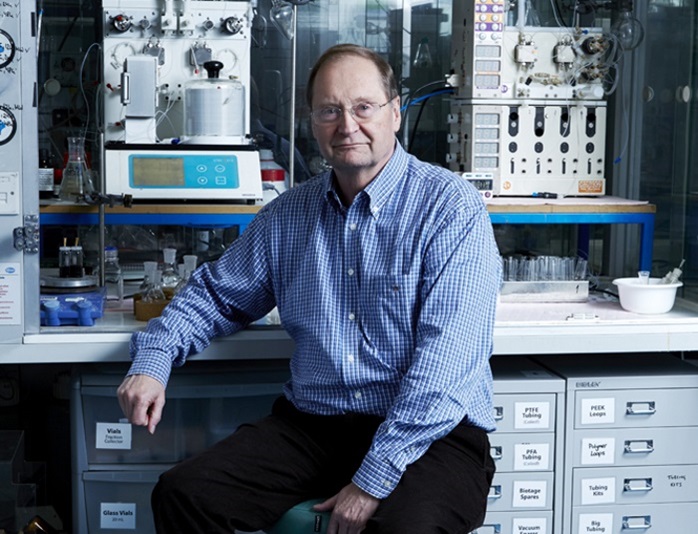 A pub conversation between three Pfizer employees led to the launch of a successful start-up that pioneered techniques in green chemistry.

Professor Steven Ley was approached by colleagues Dr Allan Marchington and Dr Ryszard Kobylecki about setting up a company to meet the growing demand for pharmaceutical compounds in the late 1990s.

The trio wanted to design compounds properly and so joined with an established company Oxford Molecular, headed by Allan’s brother Tony, which had the software to do this. Together they launched Cambridge Discovery Chemistry in 1999.

One of the technologies they were working with meant they could make compounds without producing many of the waste products that would usually have to be removed using costly and energy-intensive methods, says Professor Ley, Director of Research at the Department of Chemistry at University of Cambridge.

Their technique used polymers to immobilise the reagents needed to make products, which meant that reactions could be filtered at the end of the process to “remove all the rubbish” and give pure compounds.

The company grew rapidly and at its peak had 130 staff and a turnover of $15 million, with $5 million profit. In 2000, it was bought for $55 million by Millennium Pharmaceuticals.

Though partnering with Oxford Molecular at the start was helpful in garnering financial support, Professor Ley said the need for continual cash injections to get the company established was the biggest challenge. But he urges scientists with good ideas not to be “inhibited by the grip of money in the process”.

After the firm’s success, Professor Ley launched another start-up in 2005 with Avecia Pharmaceuticals. Called Reaxa, this built on their green chemistry work particularly on “flow chemistry” techniques where the reagents are immobilised in tubes while chemicals flow past them. Reaxa has also since been sold.

In commercialising research, Professor Ley says good ideas are only the start of a process. “As Professor Grubbs used to say, you don’t have to work all the time, but you have to think all the time”, he says.