1. Is the climate warming?

Yes. Earth’s average surface air temperature has increased by about 1 °C (1.8 °F) since 1900, with over half of the increase occurring since the mid-1970s [Figure 1a]. A wide range of other observations (such as reduced Arctic sea ice extent and increased ocean heat content) and indications from the natural world (such as poleward shifts of temperature-sensitive species of fish, mammals, insects, etc.) together provide incontrovertible evidence of planetary-scale warming. 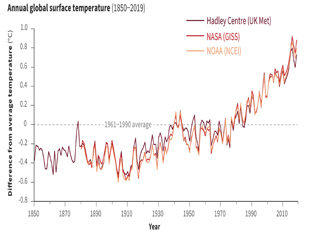 Figure 1a. Earth’s global average surface temperature has risen as shown in this plot of combined land and ocean measurements from 1850 to 2019, derived from three independent analyses of the available data sets. The temperature changes are relative to the global average surface temperature of 1961−1990. Source: NOAA Climate.gov; data from UK Met Office Hadley Centre (maroon), US National Aeronautics and Space Administration Goddard Institute for Space Studies (red), and US National Oceanic and Atmospheric Administration National Centers for Environmental Information (orange). (larger version)

The clearest evidence for surface warming comes from widespread thermometer records that, in some places, extend back to the late 19th century. Today, temperatures are monitored at many thousands of locations, over both the land and ocean surface. Indirect estimates of temperature change from such sources as tree rings and ice cores help to place recent temperature changes in the context of the past. In terms of the average surface temperature of Earth, these indirect estimates show that 1989 to 2019 was very likely the warmest 30-year period in more than 800 years; the most recent decade, 2010-2019, is the warmest decade in the instrumental record so far (since 1850). 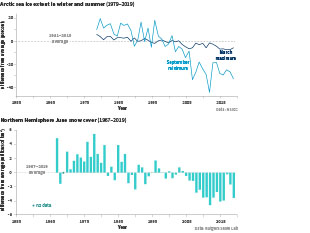 Figure 1b. A large amount of observational evidence besides surface temperature records shows that Earth’s climate is changing. For example, additional evidence of a warming trend can be found in the dramatic decrease in the extent of Arctic sea ice at its summer minimum (which occurs in September), the decrease in June snow cover in the Northern Hemisphere, the increases in the global average upper ocean (upper 700 m or 2300 feet) heat content (shown relative to the 1955–2006 average), and the rise in global sea level. Source: NOAA Climate.gov (larger version)

A wide range of other observations provides a more comprehensive picture of warming throughout the climate system. For example, the lower atmosphere and the upper layers of the ocean have also warmed, snow and ice cover are decreasing in the Northern Hemisphere, the Greenland ice sheet is shrinking, and sea level is rising [Figure 1b]. These measurements are made with a variety of land-, ocean-, and space-based monitoring systems, which gives added confidence in the reality of global-scale warming of Earth’s climate.