Sea ice extent is affected by winds and ocean currents as well as temperature. Sea ice in the partly-enclosed Arctic Ocean seems to be responding directly to warming, while changes in winds and in the ocean seem to be dominating the patterns of climate and sea ice change in the ocean around Antarctica. 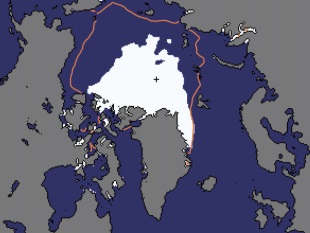 Some differences in seasonal sea ice extent between the Arctic and Antarctic are due to basic geography and its influence on atmospheric and oceanic circulation. The Arctic is an ocean basin surrounded largely by mountainous continental land masses, and Antarctica is a continent surrounded by ocean. In the Arctic, sea ice extent is limited by the surrounding land masses. In the Southern Ocean winter, sea ice can expand freely into the surrounding ocean, with its southern boundary set by the coastline of Antarctica. Because Antarctic sea ice forms at latitudes further from the South Pole (and closer to the equator), less ice survives the summer. Sea ice extent in both poles changes seasonally; however, longer-term variability in summer and winter ice extent is different in each hemisphere, due in part to these basic geographical differences.

Sea ice in the Arctic has decreased dramatically since the late 1970s, particularly in summer and autumn. Since the satellite record began in 1978, the yearly minimum Arctic sea ice extent (which occurs in September) has decreased by about 40% [Figure 5]. Ice cover expands again each Arctic winter, but the ice is thinner than it used to be. Estimates of past sea ice extent suggest that this decline may be unprecedented in at least the past 1,450 years. Because sea ice is highly reflective, warming is amplified as the ice decreases and more sunshine is absorbed by the darker underlying ocean surface.

Sea ice in the Antarctic showed a slight increase in overall extent from 1979 to 2014, although some areas, such as that to the west of the Antarctic Peninsula experienced a decrease. Short-term trends in the Southern Ocean, such as those observed, can readily occur from natural variability of the atmosphere, ocean and sea ice system. Changes in surface wind patterns around the continent contributed to the Antarctic pattern of sea ice change; ocean factors such as the addition of cool fresh water from melting ice shelves may also have played a role. However, after 2014, Antarctic ice extent began to decline, reaching a record low (within the 40 years of satellite data) in 2017, and remaining low in the following two years.