15. What is ocean acidification and why does it matter?

Direct observations of ocean chemistry have shown that the chemical balance of seawater has shifted to a more acidic state (lower pH) (see Figure 7). Some marine organisms (such as corals and some shellfish) have shells composed of calcium carbonate which dissolves more readily in acid. As the acidity of sea water increases, it becomes more difficult for them to form or maintain their shells. 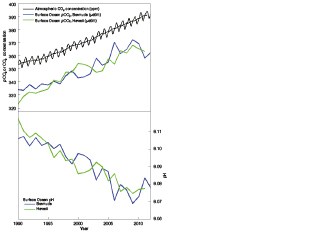 Figure 7. As CO2 in the air has increased, there has been an increase in the CO2 content of the surface ocean (upper box), and a decrease in the seawater pH (lower box). Source: adapted from Dore et al. (2009) and Bates et al. (2012) (larger version)

CO2 dissolves in water to form a weak acid, and the oceans have absorbed about a third of the CO2 resulting from human activities, leading to a steady decrease in ocean pH levels. With increasing atmospheric CO2, this chemical balance will change even more during the next century. Laboratory and other experiments show that under high CO2 and in more acidic waters, some marine species have misshapen shells and lower growth rates, although the effect varies among species. Acidification also alters the cycling of nutrients and many other elements and compounds in the ocean, and it is likely to shift the competitive advantage among species, with as-yet-to-be-determined impacts on marine ecosystems and the food web.