16. How confident are scientists that Earth will warm further over the coming century?

Very confident. If emissions continue on their present trajectory, without either technological or regulatory abatement, then warming of 2.6 to 4.8 °C (4.7 to 8.6 °F) in addition to that which has already occurred would be expected by the end of the 21st century [Figure 8]. 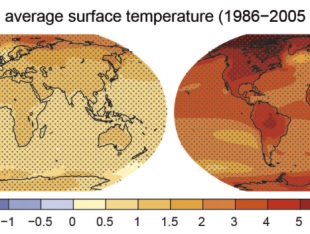 Figure 8. If emissions continue on their present trajectory, without either technological or regulatory abatement, then the best estimate is that global average temperature will warm a further 2.6 to 4.8 °C (4.7 to 8.6 °F) by the end of the century (right). The figure on left shows projected warming with very aggressive emissions reductions. The figures represent multi-model estimates of temperature averages for 2081-2100 compared to 1986–2005. Source: IPCC AR5 (larger version)

Warming due to the addition of large amounts of greenhouse gases to the atmosphere can be understood in terms of very basic properties of greenhouse gases. It will in turn lead to many changes in natural climate processes, with a net effect of amplifying the warming. The size of the warming that will be experienced depends largely on the amount of greenhouse gases accumulating in the atmosphere and hence on the trajectory of emissions. If the total cumulative emissions since 1875 are kept below about 900 gigatonnes (900 billion tonnes) of carbon, then there is a two-thirds chance of keeping the rise in global average temperature since the pre-industrial period below 2 °C (3.6 °F). However, two-thirds of this amount has already been emitted. A target of keeping global average temperature rise below 1.5 °C (2.7 °F) would allow for even less total cumulative emissions since 1875.

Based just on the established physics of the amount of heat CO2 absorbs and emits, a doubling of atmospheric CO2 concentration from preindustrial levels (up to about 560 ppm) would by itself, without amplification by any other effects, cause a global average temperature increase of about 1 °C (1.8 °F). However, the total amount of warming from a given amount of emissions depends on chains of effects (feedbacks) that can individually either amplify or diminish the initial warming.

The most important amplifying feedback is caused by water vapour, which is a potent greenhouse gas. As CO2 increases and warms the atmosphere, the warmer air can hold more moisture and trap more heat in the lower atmosphere. Also, as Arctic sea ice and glaciers melt, more sunlight is absorbed into the darker underlying land and ocean surfaces, causing further warming and further melting of ice and snow. The biggest uncertainty in our understanding of feedbacks relates to clouds (which can have both positive and negative feedbacks), and how the properties of clouds will change in response to climate change.

Other important feedbacks involve the carbon cycle. Currently the land and oceans together absorb about half of the CO2 emitted from human activities, but the capacities of land and ocean to store additional carbon are expected to decrease with additional warming, leading to faster increases in atmospheric CO2 and faster warming. Models vary in their projections of how much additional warming to expect, but all such models agree that the overall net effect of feedbacks is to amplify the warming.