4. What role has the Sun played in climate change in recent decades?

The Sun provides the primary source of energy driving Earth’s climate system, but its variations have played very little role in the climate changes observed in recent decades. Direct satellite measurements since the late 1970s show no net increase in the Sun’s output, while at the same time global surface temperatures have increased [Figure 2]. 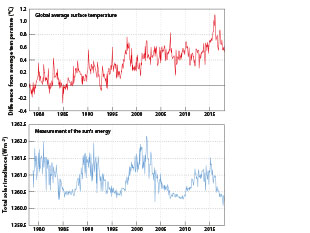 Figure 2. Measurements of the Sun’s energy incident on Earth show no net increase in solar forcing during the past 40 years, and therefore this cannot be responsible for warming during that period. The data show only small periodic amplitude variations associated with the Sun’s 11-year cycle. Source: TSI data from Physikalisch-Meteorologisches Observatorium Davos, Switzerland, on the new VIRGO scale from 1978 to mid-2018; temperature data for same time period from the HadCRUT4 dataset, UK Met Office, Hadley Centre. (larger version)

For periods before the onset of satellite measurements, knowledge about solar changes is less certain because the changes are inferred from indirect sources — including the number of sunspots and the abundance of certain forms (isotopes) of carbon or beryllium atoms, whose production rates in Earth’s atmosphere are influenced by variations in the Sun. There is evidence that the 11-year solar cycle, during which the Sun’s energy output varies by roughly 0.1%, can influence ozone concentrations, temperatures, and winds in the stratosphere (the layer in the atmosphere above the troposphere, typically from 12 to 50km above earth’s surface, depending on latitude and season). These stratospheric changes may have a small effect on surface climate over the 11-year cycle. However, the available evidence does not indicate pronounced long-term changes in the Sun’s output over the past century, during which time human-induced increases in CO2 concentrations have been the dominant influence on the long-term global surface temperature increase. Further evidence that current warming is not a result of solar changes can be found in the temperature trends at different altitudes in the atmosphere (see Question 5).