How does GM differ from conventional plant breeding?

The goal of both GM and conventional plant breeding is to produce crops with improved characteristics by changing their genetic makeup. GM achieves this by adding a new gene or genes to the genome of a crop plant. Conventional breeding achieves it by crossing together plants with relevant characteristics, and selecting the offspring with the desired combination of characteristics, as a result of particular combinations of genes inherited from the two parents.

Both conventional plant breeding and GM deliver genetic crop improvement. Genetic improvement has been a central pillar of improved agricultural productivity for thousands of years. This is because wild plants make very poor crops. Natural selection tends to favour plants that can compete with neighbouring plants for light, water and nutrients, defend themselves from being eaten and digested by animals, and disperse their seed over long distances. These characteristics are in direct conflict with the goals of agriculture, which require plants to invest as many of their resources as possible into making nutritious, easy to harvest products for human consumption. Because of the stark contrast between what natural selection has produced and what makes a good crop, for thousands of years we have used conventional breeding approaches to convert plants that compete well in the wild, to plants that perform well in agriculture. The result is our modern crop varieties, which are much higher yielding and more nutritious than their wild ancestors, but which compete poorly in the wild.

Many genes are now known that could contribute to improving sustainable food production. In some cases conventional breeding will be the best way to transfer them and in others GM might be easier or indeed the only way they can be transferred. 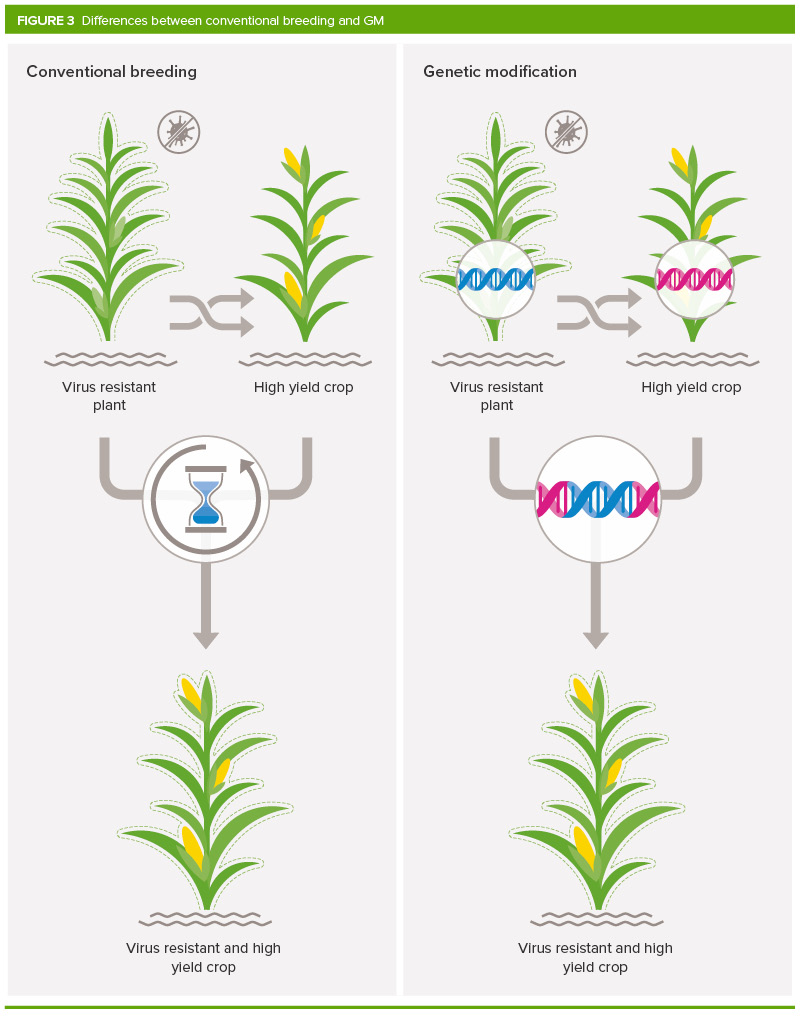 New characteristics can be introduced into crops using either conventional or GM approaches. This raises the question of when a plant breeder might choose a GM approach vs a conventional approach.

GM can only be used to introduce a new characteristic into a crop if two requirements are met. Firstly, it is necessary that the characteristic can be introduced by adding only a small number of genes, and secondly, it is necessary to know what gene or genes those are. At the time GM technology was invented we knew much less about which plant genes do what, which greatly restricted the number of useful applications for GM in crops.

With improvements in our knowledge about which plant genes do what, we now know many genes that could contribute to improving sustainable food production. In some cases conventional breeding will be the best way to deploy these genes – that is by cross breeding with the plant that contains the genes providing these characteristics.

In other cases GM, where scientists take a gene and insert it directly into a plant, might be easier, or indeed the only way they can be deployed.

There are two main reasons why GM might be preferable.

Firstly, the gene of interest might not exist in a species that can be successfully crossed with the crop. The gene might come from an entirely different kingdom, such as a bacterium, or it might come from a different plant species.

Dwarf wheat and the Green Revolution

In nature, many plant species respond to shading by increasing their height, allowing them to compete for light. The ability to adjust their height depends on a particular protein that prevents stem elongation and the plant can fine-tune its growth by changing the amount of this protein in the stem. During the 1960s, the development of dwarf varieties of wheat dramatically increased yields as part of the so-called Green Revolution. The dwarf wheat varieties take advantage of a change in the gene carrying the instructions for the height-adjusting protein, increasing the amount of the protein in the stem so that stem growth is always inhibited. This results in wheat varieties that invest less resource in their stems and more in their seeds. They are therefore higher yielding and also less prone to being flattened in the wind, a major cause of yield loss known as lodging.

Because we know so much about how this height gene works, it can be used to make dwarf varieties of almost any crop. There are no GM crops modified in this way currently being grown commercially, but there have been proof of principle studies in rice.

Our understanding of dwarfing genes illustrates an important point. It is possible to introduce exactly the same characteristic into a crop by conventional breeding or by GM methods. Each method has advantages and disadvantages, and the choice of which is better to use will depend on the specific case.

Secondly, today’s high yield crop lines have carefully honed combinations of genes. If a useful gene or gene variant is discovered in a wild relative, crossing the high yield line with the wild relative will result in mixing together the genomes of the two parents, destroying the carefully selected combination of genes in the high yield line. Using modern molecular breeding techniques, such as “marker assisted breeding”, it is possible to reassemble those gene combinations over a relatively small number generations. Nonetheless, it does take multiple generations, and therefore several years. Furthermore, even then it is almost always the case that additional genes that are very close to the gene of interest are also transferred.  These problems can be avoided if it is possible to introduce the gene directly into the high yield crop by genetic modification.