The current European Commission, which came into office in November 2014, has pursued a “better regulation” agenda, aiming to streamline legislation and cut red tape.

What are the EU institutions and how do they make policy?

Policymaking is the process of developing ideas or plans that are then put in place through legislation, creating a regulatory system.

EU policy can be developed and new policy introduced for a number of reasons and in a number of ways. The European Commission continually works to identify where policy development may be needed, or existing legislation requires review. At the same time, the Presidency of the Council rotates every six months and each country will have priorities for their Presidency that may require policy development.

Many factors can drive new policy development including social need and technological progress, meaning legislation is no longer fit for purpose. The current European Commission, which came into office in November 2014, has pursued a “better regulation” agenda, aiming to streamline legislation and cut red tape. The stated intention is to create a clear, consistent framework which promotes better jobs and growth. There is a strong focus on improved impact assessment, which as yet does not include scientific issues.

To begin policy development, the European Commission develops proposals. It does this by inviting input from citizens, stakeholders and experts through consultations and expert committees to develop these.

If a proposed Commission policy is expected to have ‘considerable economic, social and environmental impacts’, the preparation of an Impact Assessment (IA) is required. This applies to both legislative and non-legislative initiatives as well as delegated acts and implementing measures, where the Commission can make more technical changes and amend non-essential aspects of legislation.

IAs must verify the existence of a problem, identify its underlying causes, assess whether EU action is needed, and analyse, quantifying where possible, the advantages and disadvantages of different approaches. Commission guidelines specify that IAs are usually not required when, ‘there is little or no choice available for the Commission (for instance when the Commission is implementing previous policy decisions already subject to an IA); Impacts cannot be clearly identified (for instance, in the case of broad policy communications); or Impacts are small (for instance, the repeal of a redundant act)’.

The proposal then undergoes a process of scrutiny and debate by MEPs from the 28 EU Member States and representatives from the governments of each state in the Council.

Policymaking in the EU typically takes place by ‘ordinary legislative’ procedure. This procedure involves the Commission, Parliament and Council, who aim to come to agreement on the final legislation.

1. The European Commission is the executive body of the European Union responsible for managing the day-today business of the EU. This includes proposing legislation, implementing decisions and upholding the EU treaties. It is made up of 33 Directorate Generals (DG) departments covering a wide remit of areas such as research and innovation, health, environment, communication, and budget. This is overseen by a College of 28 Commissioners, one from each Member State, each nominated by their respective national governments to serve five year terms.

2. The European Parliament is an elected body, made up of 751 Members (MEPs) elected to represent constituencies in the 28 member states. The United Kingdom has 73 MEPs.

Under the rules of the treaties the European Commission develops policy proposals for different types of legislation: Directive A legislative decision made by the European Union that requires Member States to achieve the outcome as outlined in the Directive, but allows some variation in how they implement this.

Regulation A legislative decision made by the EU, which must be implemented in the same way by all Member States.

Decisions A legislative decision aimed only at specific organisations and individuals, made clear in the Decision.

Recommendation Non-binding, it allows the EU institutions to express an opinion on a specific issue, and to recommend a way forward.

Opinion A non-binding instrument on a specific issue that can be issued from three of the institutions (Commission, Council and Parliament), or from the (consultative) Committee of the Regions and European Economic and Social Affairs Committee. These can be issued whilst legislation is being developed by the EU. An example of this is a 2014 opinion by the Committee of the Regions on “A Policy Framework for Climate and Energy in the period from 2020 to 2030”.

The European Commission proposal is considered by the co-legislators: the European Parliament and the Council. This is the ‘first reading’ of the proposed policy.
In the Council, proposals are considered by specialised working groups which go over the texts to agree as far as they can and report upwards to senior officials and then to national ministers in Member States. How far ministers are directly involved – whether in Member State capitals or in Brussels – depends on the issues and how far they generate controversy among Member States. The Council may agree on a ‘general approach’ before the Parliament has agreed on its position, to give them an idea of the Council’s general view of the Commission’s policy proposal.

In the European Parliament a specialist Committee of MEPs is assigned to lead in scrutinising, debating and developing amendments to the proposed policy. The Committee also agrees a negotiating team for discussions with the Council. One MEP from this Committee is elected rapporteur. They will lead the development of a committee report, suggesting any amendments they think should be made to the Commission’s policy proposal. This report is presented to the rest of the Parliament and an overall Parliamentary position is developed. This will form the basis of the Parliament’s position to debate with the other co-legislator, the Council.

‘Trilogue’ meetings can also be arranged between the members and representatives of Commission, Parliament and Council as an informal way of engaging and facilitating agreement in addition to the formal agreement process.

A Conciliation Committee (made up of an equal number of Council representatives and MEPs) reaches agreement on the final joint text. This Committee must agree in order for the policymaking process to continue. The policy is adopted when Parliament and Council approve the text after a ‘third reading’, where they cannot make any further textual changes.

The Presidents and Secretary-Generals of both institutions sign the text and it becomes official once it is published in the Official Journal of the European Union.
Once a piece of policy is in place, it can be reviewed and adapted at certain times if necessary. This may be to take into account changes in an area of legislation due to technical and scientific advances, for example the revision of the Medical Device Directives in 2012. The Commission can propose a reform of an existing policy which is passed to the Parliament and Council for agreement through ordinary legislative procedure. 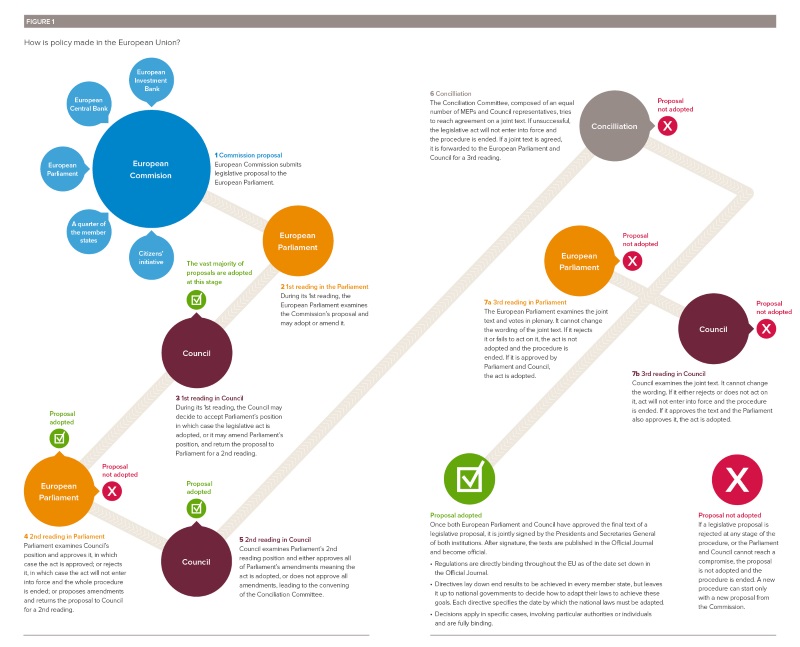