Would international collaboration be affected if the UK left the EU?

More than half of the UK’s collaborative papers are now with EU partners.

We have seen that UK-based researchers collaborate with partners all over the world. The proportion of the UK’s internationally collaborative work that is authored with EU partners has been steadily increasing over time (Figure 4).

The EU supports international research collaboration – within the EU and between EU researchers and those in the rest of the world – through various mechanisms. Several of the EU’s research funding schemes aim to support collaboration, and although EU funding does not lead to greater levels of international collaboration than funding from other sources, collaborative work that is funded by the EU has greater impact (Table 4). The EU also supports collaboration in research facilities, and by playing a coordinating role in collaborations.

UK-based researchers would still be able to collaborate internationally if the UK were to leave the EU, and to access non-EU sources of support to do so. However, it is not possible to say which parts, if any, of the EU’s support for collaboration they might continue to be able to access.

There are a number of countries that are not members of the EU, but can take part in EU research programmes, collaborate as part of consortia, and have access to European infrastructure. These countries have ‘Associated Country’ or ‘Third Country’ status, and they include Norway, Israel and Switzerland. You can find more information about these countries and the arrangements they have with the EU in the Society’s report on the role of the EU in funding UK research.

If the UK were to have Associated Country status with respect to EU research funding, UK-based researchers could have access to some of the schemes that support international collaboration, but the UK would need to make an appropriate financial contribution to that particular scheme while no longer being able to contribute to its design.

How much do UK-based researchers collaborate with EU partners?

Germany and France, in particular, became increasingly frequent partners after 1990 and this growth accelerated after 2000. Most of these papers have been bilateral, but about 30% of publications with France or Germany also have a co-author from the USA. Some UK papers include several co-authors that may come from both EU and non-EU countries, such as the US, Canada or India. Approximately one third of UK papers that have a non-EU co-author also have an EU co-author (Figure 5).

These analyses suggest that collaboration with researchers in EU member states is important for UK research, but does not indicate whether these collaborations rely on the UK’s membership of the EU. 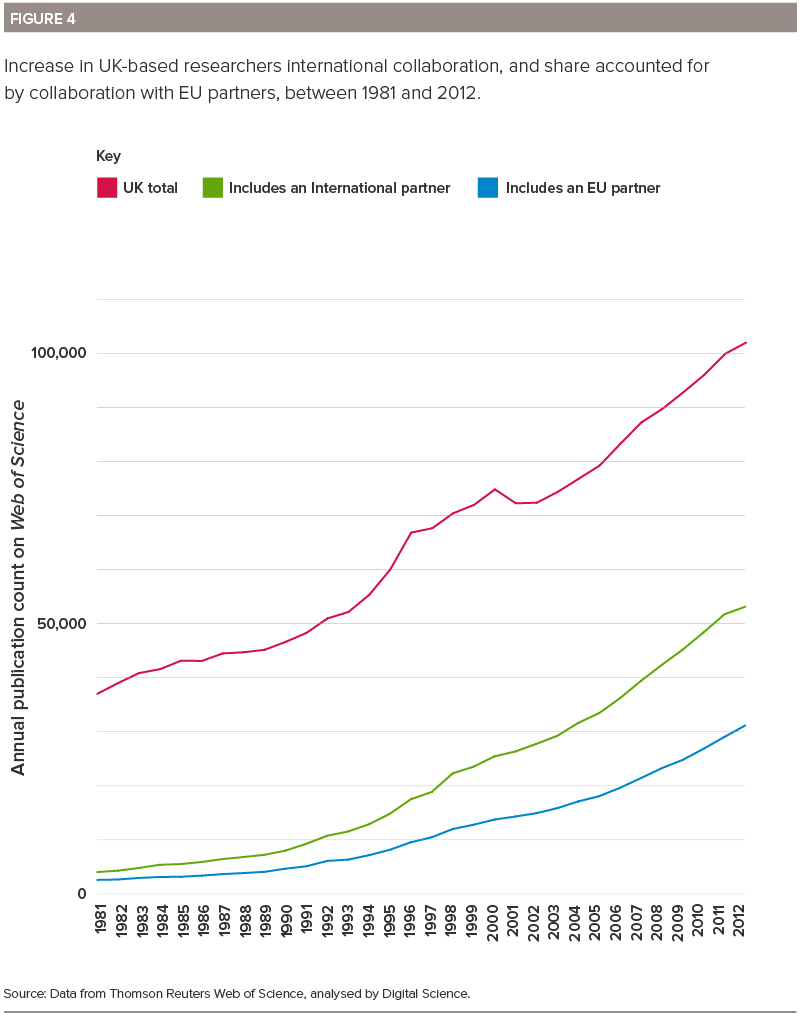 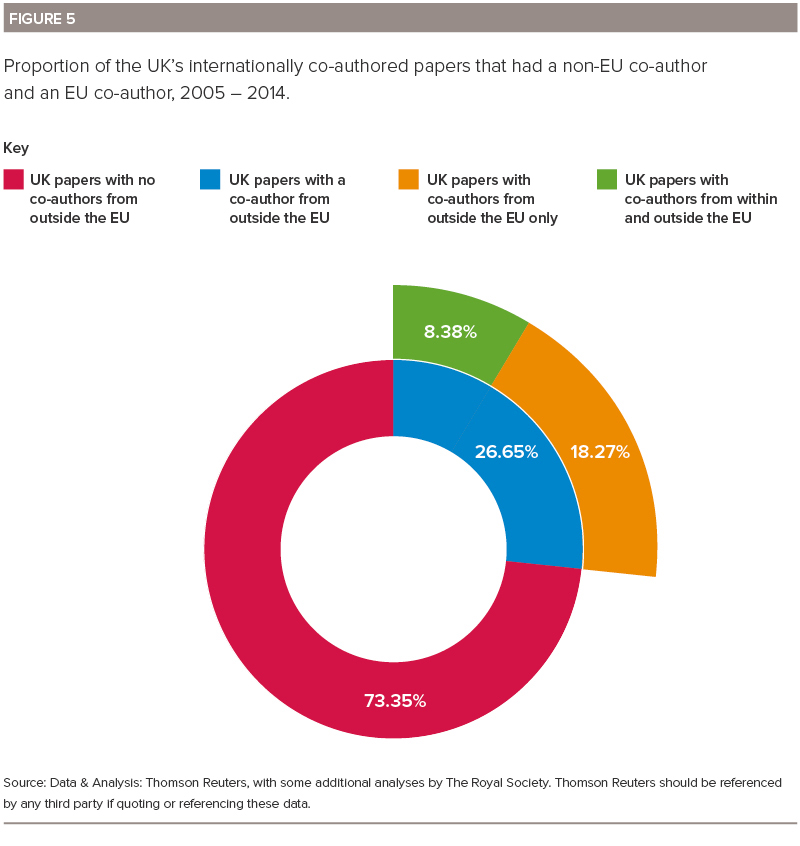 How does the EU support collaboration?

The EU has a stated aim to improve the effectiveness of national research systems, transnational co-operation and competition through the creation of the European Research Area (ERA). It aims to foster an open labour market for researchers and optimise circulation, access to and transfer of scientific knowledge. The Society’s report on the role of the EU in funding UK research includes further information on the ERA.

International collaboration is supported and facilitated by a wide variety of mechanisms and schemes. These exist at the national and international level, and various organisations are involved in funding and administering these schemes, from governments to charities, working alone or collaboratively themselves. Within this context, the section summarises the ways in which the EU supports collaboration, by funding collaborative research projects, investing in infrastructure, providing networks and coordination, and harmonising research systems across Europe.

The EU funds collaboration through several interlinked programmes. Further details of EU funding for most of the schemes discussed here can be found in the Society’s report on the role of the EU in funding UK research. Framework Programmes (FPs) are the main EU funding mechanism for research, development and innovation.

Horizon 2020 is the current Framework Programme, with a budget of €74.8 billion for 2014–2020. Most Horizon 2020 funding is only available to consortia of organisations from three or more countries, one of which must be an EU Member State. Horizon 2020 also funds the Marie Skłodowska-Curie Actions to support mobility (see page 29).

The European Research Council (ERC) will award 17% of the total Horizon 2020 budget. ERC funding is awarded solely on the basis of excellence and does not require collaboration, and the vast majority of funding goes to individual scientists, although consortia can apply. Nonetheless, 57% of papers funded by the ERC do include international collaboration. This compares to 53% of papers funded by the Wellcome Trust.

Societal Challenges and Research and Innovation Actions fund research projects tackling challenges in areas such as health, energy and transport. There are also more-specific Innovation Actions, which focus funding on closer-to-the-market activities if they aim at producing new or improved products or services. Applications for this funding require that a consortium is formed, representing at least three countries, one of which must be a Member State. The budget for this part of Horizon 2020 is €31.7 billion.

The ERC will award 17% of the total Horizon 2020 budget. 57% of papers funded by the ERC include international collaboration.

There are many shared research facilities within Europe, and these are part of the landscape for collaboration within the EU. While most of the cost of shared research facilities is borne by participating countries, the EU often provides funding for activities such as planning, strategic coordination, networking and transnational access. The Society’s report on the role of the EU in funding UK research includes details of EU funding for international facilities and major equipment. Beyond funding, the EU plays an active role through a number of routes, to facilitate collaboration through shared research infrastructure.

The EU has also established the European Research Infrastructure Consortium (ERIC) to make it easier to establish and operate large European research infrastructure among several Member States and associated countries, removing the need for the repetition of negotiations between countries.

The UK hosts the headquarters of 6 pan-European research facilities, with facilities distributed across multiple participating countries within the EU and beyond. Table 2 shows which of these facilities were supported by significant EU funding to help them become established, as well as the breadth of collaborations they support.

The EU supports transnational and virtual access, networking, and joint research activities in national research facilities. These create opportunities for new and existing groups of researchers and scientists to collaborate across disciplines and countries. Users can be researchers from academia, business, industry and the public sector from countries participating in the programmes.

The European research landscape includes several intergovernmental organisations – in which two or more nations work together – providing valuable facilities and infrastructures. Each of these organisations has its own institutional arrangements and membership rules, and the EU plays a different role in each. Some, such as the ITER fusion experiment, are directly managed by the EU in concert with other countries. Others, such as CERN, predate the EU itself and receive only a marginal part of their budget from the EU.

Within the ERA, there are also Joint Programming Initiatives, which are research partnerships that aim to pool national research efforts across Europe and tackle common challenges more effectively in a few key areas. Participation of Member States is voluntary, so partnerships comprise variable groups of countries. The European Commission facilitates the Joint Programming process and supports Member States in a number of ways, including by launching complementary measures, and linking them to international actions and bodies.

Supporting collaboration with countries outside of the EU

As well as supporting collaboration within the EU, the EU has international agreements for scientific and technological cooperation with 20 other countries. These create a framework for participation in joint projects, sharing of facilities, staff exchanges or the organisation of specific events. Industrialised and BRIC countries are usually required to fund their institutions’ participation.

UK papers acknowledging any type of EU funding have more impact than the average paper.

It is difficult to assess the impact of the various mechanisms through which the EU sets out to support collaboration, but it is possible to compare EU-funded work with that funded from other sources. Box 3 also considers whether joining the EU increases collaboration.

Source of funding and level of international collaboration. Percentage of research funded by each organisations that was internationally co-authored, between 2005 and 2014.

Internationally collaborative papers have greater impact than domestic papers. For both papers published by UK-only authors and UK-EU co-authored papers, those acknowledging any type of EU funding have more impact than the average paper, and where that funding came from the ERC in particular, papers have the highest impact of all (Table 4). This may reflect the excellence of applications to and research funded by the ERC.

Impact of UK-based researchers’ papers, whether or not they are collaborating with partners in the EU and receiving European research funding (2005 – 2014).

Research has shown that there is a marked increase in cross-border collaboration within Europe when countries join the EU. Although not necessarily a causal link, this increase starts even before nations receive full membership, perhaps spurred by access to EU research funds as Associate Members. The most significant increase in co-publishing is between new EU Member States when they join the EU. There is also an increase in collaboration between new Member States and older Members States when the new Member joins, but not to such a great extent. It is not possible to draw conclusions from this about likely consequences for collaboration of leaving the EU.