Rupert Baker bumps into a couple of Fellows of the Royal Society while reading a biography of author William Golding.

Following the publication of his first three novels, Golding moved in 1958 to a cottage in Bowerchalke, Wiltshire. A later arrival in the village was James Lovelock FRS.

William Golding is a literary figure who has been rather neglected in recent years. I think most adolescents still get to 'do' Lord of the Flies at school, but I haven’t met many people who have read his later works such as Pincher Martin, Free Fall and The Spire. As a habitual raider of my father’s bookshelves during my impecunious days as a physics undergraduate, I worked my way through these as a diversion from learning the laws of thermodynamics; they’re tough going in places, and won’t have you rolling in the aisles, but for my tuppen’orth Golding is one of the major British writers of the twentieth century. John Carey’s new biography (my current reading material on journeys into work) does a fine job of bringing Golding back into the spotlight, flaws and all, and also – to my surprise – notes how he crossed paths with a couple of Fellows of the Royal Society. Well, our Fellows do get everywhere, I suppose!

In the darkest days of World War II, Golding was appointed to the weapons research facility MD1, based near Aylesbury and often jokingly referred to as ‘Mr Churchill’s Toyshop’. In his biography, Carey considers that the most likely route for Golding – then an obscure temporary lieutenant in the Royal Naval Volunteer Reserve – into such a rarified scientific establishment, would have been through a recommendation from the physicist Professor Frederick Lindemann FRS, Churchill’s scientific adviser. Golding had read Natural Science at Brasenose College before the war, in an Oxford environment where Lindemann, as director of the Clarendon Laboratory, was one of the leading figures. 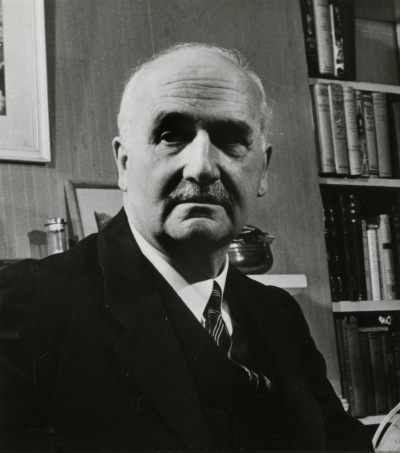 Unfortunately, Golding’s research career at MD1 proved to be a short and painful one. He was soon warned by a superior officer about his somewhat 'carefree' attitude to carrying electric detonators (which exploded with a powerful punch) and batteries about his person, with the superior explaining to Golding that he would:

'… sooner or later, in a moment of mental aberration, contrive to get both detonators and battery in the same pocket. As I did not want to have any eunuchs around the place, he would cease this practice at once.'

The warning went unheeded, and Carey records that Golding was in hospital from 30 November 1942 to 16 January 1943 with a ‘Bomb Injury’ to his right thigh. As Golding’s daughter Judy was born in July 1945, however, it seems that the worst-case outcome of mixing detonators and batteries had – thankfully – not come to pass in this case.

Following the publication of his first three novels, Golding was able to move his family in 1958 from a small flat in Salisbury – where he was still working as a teacher – to a cottage in the village of Bowerchalke, nine miles away. A later arrival in the village was James Lovelock FRS, who moved in 1964; Lovelock’s commute being somewhat longer than Golding’s, as he was working at the time for NASA’s jet propulsion laboratory in Pasadena, California! Lovelock and Golding were soon spending evenings 'chattering away' in the village pub, The Bell, and strolling to the local post office together. In one of the interviews Carey carried out as background for the biography, Lovelock recalls how, on one of these walks, he first mentioned to his friend ‘Bill’ Golding a 'big, big idea about the earth':

'Life on the surface has been regulating the composition of the atmosphere ever since life first formed on earth. And not only that, but it would make the climate, because the climate depends on the atmosphere … I was quite excited telling Bill about it, and he got excited too and he turned to me and said, "Look, if you’re going to come up with a big idea like that you’d better give it a proper name," and I said, "What do you suggest?" And he said, "I suggest you call it Gaia."'

So, Golding’s lifelong interest in the Greek myths (Gaia was the Greek goddess of the earth) gave a name to one of the most radical ecological hypotheses of recent years, and one which continues to generate intense debate among scientists and environmentalists. The Library has several biographies of both James Lovelock and Frederick Lindemann available in our Modern Loan collections, so do pop in and take a look; meanwhile, I’ll race on to the end of Carey’s (extremely readable) Golding biography, wondering whether any more of our Fellows will pop up in the life story of my neglected novelist hero.