According to Hauksbee’s 1709 account he could see letters by the light of his machine – probably the first time a book or manuscript had been read by artificial illumination that didn’t drip wax.

In recent blogs I’ve shown a lookalike Georgia O’Keeffe and a Damien Hirst prequel. Let’s go for the full Modernist set with some Fifties-style action painting. 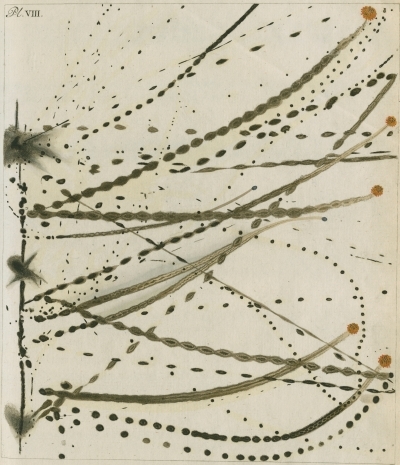 The dripmeister Jackson Pollock of the Enlightenment was Martin van Marum FRS (1750-1837) and of course he wasn’t making art at all. At the Teylers Museum in Haarlem in the late eighteenth century, van Marum demonstrated the large electrostatic generator designed by the English instrument-maker John Cuthbertson (bap.1743-d.1821) and conducted a series of eventually published electrical researches. In common with many scientists working before the age of high speed photography, he had a major difficulty in representing electrical phenomena that could be very fast, or quite ephemeral. His engraver was likely unfamiliar with such visual effects, not having witnessed them, let alone experienced their crackle and fizz: while for van Marum’s reading audience, electricity might be an exotic and unrecognizable novelty.

These patterns were created by van Marum as he ran high charges through different metal wires – in this case an alloy of tin and lead. He found that as the wire exploded, he could capture the effect directly on paper or glass. Scientifically it has been considered as the first stirring of plasma physics, but it is also an ingenious and beautiful solution to a practical illustrative problem. If you have it on paper already, the engraver and colourist can simply copy it.

Terje Brundtland has written about the earlier electrical experiments of Francis Hauksbee (1660-1713) at the Royal Society in which Hauksbee observed electrical effects within specially-made glass globe vacuum chambers and indeed Brundtland has recreated such machines based upon Hauksbee’s illustrations, to find out what was involved. You can see electric arcs in the original engravings, but just barely. 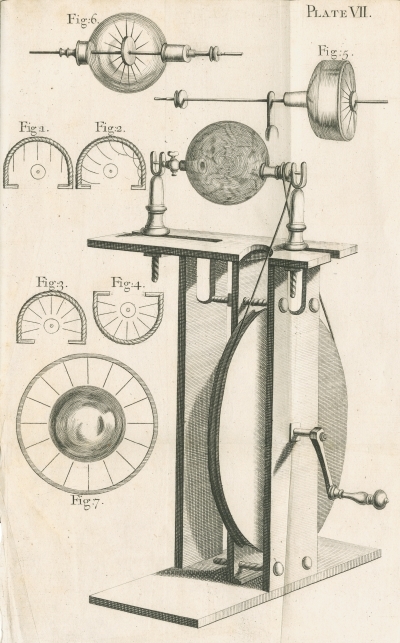 A globe electrical machine by Francis Hauksbee, from his Physico-mechanical experiments on various subjects, 1709

This is one of my favourite episodes in science because according to Hauksbee’s 1709 account he could see letters by the light of his machine – probably the first time a book or manuscript had been read by artificial illumination that didn’t drip wax. Flicking a light switch to read would be centuries and a mountain of research and engineering away, but for me (I know, I’m a librarian) this is a moment when science showed its potential to liberate the human mind.

I was lucky enough to see one of Terje’s Hauksbee-designed globe electrical machine being demonstrated by Professor Jim al-Khalili in the Royal Society Library during the filming of his series Shock and Awe (2011). The  experience was quite fascinating. The apparatus produced an ethereal purple light requiring you to be just a few inches from the machine to appreciate it. To my 100-Watt orientated eyesight it appeared impossibly dim and Hauksbee’s illustrator must have been hard-pressed to express it at all.

More recently, I’ve been looking at some of the works of the industrialist Lord Armstrong FRS (1810-1900) whose house at Cragside in Northumberland is famous for being the first high-tech hydro-electrically powered residence lit by Swan incandescent lamps. I was surprised to see that Armstrong too used a static generator and Leiden jars for scientific research, just like van Marum. In a supplement to his book Electric movement in air and water (1899) there are many Lichtenberg figures revealed by red lead and sulphur powders. Indeed, Armstrong exhibited such works at a Royal Society soiree in 1897 leading me to wonder if his branched ‘lightning’ figures had as much aesthetic and printing significance for him (they were autotyped) as their less obvious scientific purpose. 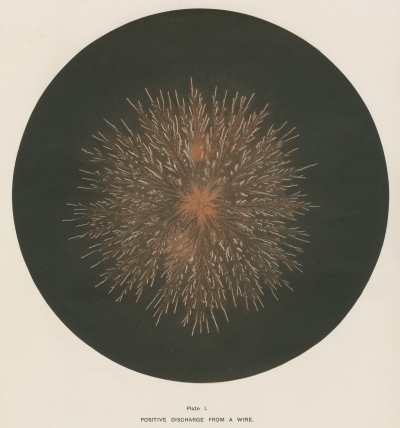