Best of both worlds – Science and Family

Unusually, my journey to parenthood started one evening in April 2014 at a community hall. It has been both terrifying and exciting, ultimately forcing me to alter my approach to work so that I can try to have the best of both worlds – Science and Family. 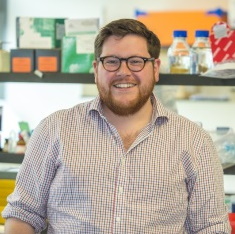 I met my husband Ed, a teacher, in 2008 during my PhD. We had our civil partnership in 2011, whilst I was a post-doc at the MRC Centre for Regenerative Medicine, with Stuart Forbes. During this time, I would think nothing of the long hours, weekends and evenings I would plough through; the pay off was a series of good papers. I found those times thrilling. Following a relatively short stint as a post-doctoral fellow I was awarded a Leverhulme Trust Fellowship to establish my own group at the MRC Human Genetics Unit in 2013. Starting a group is a daunting task in which there are many unknowns and no certainty of success. It might then seem like madness for us to concurrently start the adoption process.

Perhaps it was, but the space to set-up the lab meant that I also had flexibility and time to go through the adoption process, which was intensive: Weekly meetings with our social worker and homework – which would contribute to our Form F, the document by which you are measured and ultimately advertised. There are preparation groups and panel meetings where you are approved and matched with your children. As well as the emotional pressure, there is a time burden.  Once you are matched, there are daily visits to your new children, initially in their foster home. For us this entailed a daily three-hour round trip journey for two weeks. In some cases this process can take significantly longer. Adoption leave follows broadly the same rules as parental leave with Ed taking the bulk of leave and me the equivalent of paternity leave, a couple of weeks. I felt I would rather spend the time at home once my children had arrived, rather than travelling to and fro for meetings. Obviously there is a need for parity between adopters and expectant parents but the necessary level of bureaucracy which comes with an adoption is not well recognised or accommodated at the institutional level. It is up to the adopter to figure it out.

Our daughter and son moved in with us in August 2015. From start to finish the whole process took about 18 months. I can no longer work late nights and weekend work in the lab is a rarity.  Early mornings are gone because I drop my children off at school and I work from home on a Monday afternoon so I can collect the children and Ed can study for an MLitt.  Of course my workload has not reduced. I have found that some more evening work is required. Also saying no to things, the odd paper review for example, has helped. Having children has forced me to structure my time in the lab much better and make the most of the hours I have at the bench. I’ve not mastered it yet – more often than not you can see me frantically rushing out of the building to get home in time for supper.

Ultimately the experience has been overwhelmingly positive – I have two great children, a very supportive group and an understanding unit. It takes compromise to have it all, and without Ed taking time off from his own career it would have been almost impossible. This year, LGBT adoption and fostering week is 7-13 March nation-wide and I would encourage any potential LGBT adopters to contact their local agency and find-out what events are on.