Images from the archive: an interview with with Dr Louisiane Ferlier

In this post, Louisiane Ferlier considers what one picture can tell us about the historical and cultural context of scientific advances.

The following interview was first published on 26 January 2017 on the blog of the AHRC-funded Making Visible research project from the Centre for Research in the Arts, Social Sciences and Humanities at the University of Cambridge. It is reproduced here with permission and our thanks.

Can you tell us briefly about yourself and your background?

Dr Louisiane Ferlier, Digitisation Project Manager at the Royal Society, in charge of the Royal Society Journal Collections: Science in the making. I have come to the project as an historian of ideas; my research investigates the role of religious institutions in the circulation of knowledge in the 17th century.

Which picture have you chosen, and what does it show?

I have chosen the engraved plate inserted with issue 5 of the first volume of the Philosophical Transactions. It is composed of four figures corresponding to three articles from the issue published by Henry Oldenburg on July 3rd 1665. 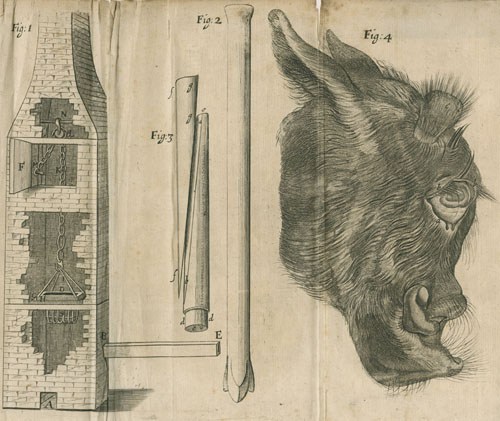 Plate from first volume of the Philosophical Transactions, 1665

Figure 1 relates to an article by Robert Moray entitled ‘An Account, how Adits & Mines are wrought at Liege without Air-shafts’. It shows a brick chimney and details how air, ash and minerals circulate within it.

Figure 2 and 3 are connected to the previous article as they show the promising invention by a Monsieur Du Son of a tool to ‘break easily and speedily the hardest Rocks’ which was communicated to Oldenburg by Moray. Resembling a stake, the tool was to be used as a chisel to drill through hard rocks when constructing mineshafts.

Figure 4 is the best known of the group and illustrates a two-part article communicating Robert Boyle’s description of a monstrous calf. The calf was born with a monstrous head described in the article as having ‘no sign of any Nose (…) the two Eyes were united into one Double Eye […] Lastly, that just above the Eyes, as it were in the midst of the Forehead, was a very deep depression, and out of that grew a kind of double Purse or Bagg.’ Alerted by the farmer of the monstrous birth, Boyle ordered for the head to be cut and preserved in alcohol.

Why have you chosen this image?

This image frames powerfully the variety of topics discussed during the early meetings of the Royal Society and the wide range of scientific illustrations that can be found within the Philosophical Transactions. The juxtaposition of figures representing engineering tools next to the sketch of a zoological wonder captures the origins of the two strands of science which were separated into the A and B sides of the Philosophical Transactions in 1887 (A = mathematical, physical and engineering sciences and B = biological sciences).

I find that this juxtaposition creates a particularly interesting tableau reflecting the complexity of disciplinary boundaries in the early modern period. Considered as a single plate within a single publication, the plate unites scientific illustrations vastly different in their aims, executions as well as subjects. And, taken separately, each of the figures would lead us to discover a different network of correspondents, witnesses and collaborators, all supporting science in the making in a different way.

How does this image resonate with you in the context of your work or research?

The aim of the project I manage at the Royal Society is to create a new digital archive of its original journal collections. Illustrations such as this one are what motivated me to join the project in the first place. The archive will contain this image, its related articles and several thousands of others in high definition. It will allow researchers, curious visitors and future scholars to wonder about this strange creature, and wander from its representation to its fascinating description by Boyle. Or, to discover that mines are discussed throughout the history of the Royal Society and that a fascinating history of mining could be retraced from this illustration to the twentieth century through the pages of the Philosophical Transactions.

Do you know anything about the making-process of the image? Does knowing how the image was created affect your understanding of the image?

I also picked this image precisely because I know very little about the original draughtsman of each figure as they could have been drawn by various people. The digging tool for instance could have been drawn by Monsieur du Son, its inventor, or equally, by Moray who communicated it to Oldenburg. The calf’s head, although it is described by Boyle, could have been drawn by another observer after it was preserved in alcohol (which would explain why the observer did not include the rest of the body, which Boyle did see before he had the head removed). The many hands through which each sketch must have travelled before that of the engraver are unknown, and even the engraver did not sign this specific plate.

This is an ideal example of a puzzle to offer to the Making Visible project where each piece is, in itself, another puzzle. Knowing about the specific of the making-process would reveal much about the circulation of knowledge in the early modern period.

What significance does the image have for the historical understanding of the relationship between knowledge-making and image-making?

The composite nature of the plate displays side by side two technical drawings and a natural history drawing. Much of the scholarship which discusses early image-making focuses on natural history but technical drawings used fascinating techniques to ‘truly’ and ‘faithfully’ represent science in the making. The engraving also encapsulates the complexity of scientific illustrations: without a scale or measures dedicated to each figure, the tool is of the same proportions to the shaft and the calf’s head with its dark lines attracts any viewer’s eye away from the technical drawings. The composition of the plate therefore transforms the experience of each figure. Moreover, each figure depends very heavily on its description included in the related articles to make any sense, yet, there is no explicit reference on the plate to the article.

I always thought that representing the calf’s head in profile was a strange choice: if the calf has no nose and a single eye, a front-facing view would be an easier perspective to depict the monstrosity. Accentuating the twisted tongue and the protuberance on the forehead, I find that the profile view makes him look nearly mischievous: as if he was pulling its tongue and winking at the reader.