Finding the ‘tooth’ about baleen whales

Back in August, Biology Letters published an open access paper on the teeth of archaic baleen whales. The study was picked up in the media and was featured in The Guardian and Newsweek, among others.

We caught up with one of the authors, Dr David Hocking from Monash University and Museums Victoria in Melbourne, Australia, and asked more about his paper and his experience publishing with Royal Society Publishing. 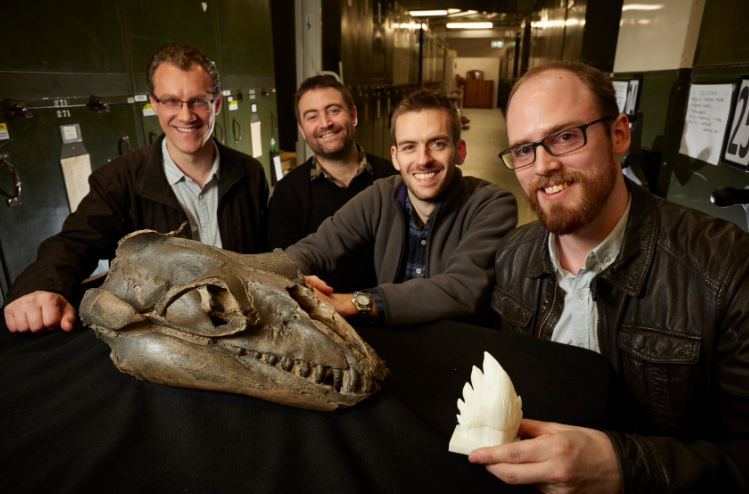 Tell us about yourself and your research

I am a postdoctoral research fellow at Monash University and Museums Victoria, where I combine study of ancient fossils with modern animal behaviour to learn about the evolution of underwater feeding in whales, dolphins and seals. This change from hunting on land to feeding entirely underwater was one of the great challenges facing mammals that moved back into the sea. My research seeks to explore how these species use their anatomy (e.g. jaws, teeth and claws) to catch, kill and process food underwater. Finding relationships between form and function in living species provides the information needed to make inferences about behaviour for extinct species in the fossil record. This lets us track behaviour over time, highlighting how differences in behaviour may have influenced the evolution of these remarkable animals.

What is your article about?

One of the great mysteries in marine mammal evolution is the question of how ancient whales replaced their teeth with baleen, so that they could strain tiny prey-like krill from seawater. Recent fossil discoveries have suggested that early whales may have first begun “filter feeding” using complex interlocking teeth, with baleen evolving later from the gums to fill in spaces between these teeth. Over time, baleen would have replaced the teeth entirely, leading to the condition we find in all living baleen whales (e.g. blue and humpback whales). We see a similar set-up in modern crabeater and leopard seals, where multi-cusped cheek teeth are used to strain krill from seawater in Antarctica. By comparing the shape of their teeth with those of modern filter feeding seals, our article tests the hypothesis that ancient whales used their teeth in an analogous manner.

What are the highlights readers should take from the article?

Teeth are tools. And just like a human tool, the shape of a tooth can tell us a lot about how it was used. When we look at the filtering teeth of living seals, we find that they have blunt, rounded notches between tall cusps that allow water to flow through the tooth row during filtering. In contrast, species with sharp cusps and notches (e.g. lions or dogs) use their teeth to pierce and cut prey, allowing them to easily process large prey into bite-sized bits. When we compared fossil whales to these modern species, we found that they had teeth as sharp as terrestrial predators, while completely lacking the rounded notches modern seals use for sieving. This indicates that these early whales weren’t filter feeding using their teeth, and that something else must have started whales on the road to their modern lifestyle.

One possibility is that the ancestors of today’s baleen whales started using suction to catch prey. In modern marine mammals, a switch to suction feeding is usually accompanied by reduction or loss of teeth. The same may have happened in early whales. Once prey was drawn into the mouth by suction, excess water could be expelled via the sides of the mouth, keeping the prey trapped inside. Most prey can easily be held inside the mouth behind the gums, restricted by the narrow gape alone, but with extremely small prey there is a greater risk that it will be forced out of the mouth along with seawater. To prevent this, the gums were likely adapted, first to form horny ridges (as found in living suction feeding Dall’s porpoise), and later to form rudimentary baleen. Among living baleen whales, only the grey whale routinely uses suction alongside baleen to capture prey, but rather than being an unusual outlier, it is possible that this is a relic of what once was; a rare clue into how the ancestors of today’s whales may have lived.

Why did you choose Biology Letters?

How baleen evolved in whales has been a mystery since Charles Darwin wrote about it in The Origin of Species (1872). Since that time, the Royal Society has been at the forefront of research into evolution and natural history. Biology Letters was therefore a natural choice for us, allowing us to continue this long tradition. As a journal, Biology Letters is widely read and has a well-founded reputation for rapid publication, making it an excellent destination for novel research. We were also excited to be able to make our work open access, helping us to reach a wider readership among both scientists and the general public.

What’s next for you?

Every year more and more fossils are being discovered and described, providing new clues about how these early whales lived. But one of the problems with our “suction feeding hypothesis” for baleen whale evolution is that it relies on our understanding of how these extinct species used their tongue, gums and lips during feeding – soft tissues that often don’t preserve in fossils. Because of this, one of the main avenues of my research will actually be spending more time studying living species, whose behaviour we can actually observe in the wild. Over the past few years it has become clear that suction feeding is very common among seals, dolphins and whales. By looking at the shape of the skull and teeth in these species, we hope to find the clues we need to look for in fossils to work out if suction was common in those extinct species as well.

Biology Letters is a fast, high-quality journal, publishing short research articles, reviews and opinion pieces across the biological sciences. If you are interested in submitting please visit our information for authors page or contact the editorial office.