Virginia Mills finds out about the life and work of palaeontologist Dorothea Bate, and the perseverance required to unearth the fossil remains of pygmy elephants.

‘Often not a single proboscidean tooth would be obtained during two or three days’ work, and only eleven molars and parts of molars were procured as the result of three weeks’ digging.'

Dorothea Bate (1878-1951) is a name that crops up a few times in Royal Society records from the early twentieth century, in both our archive catalogue and our published journals. I knew a little of her reputation as a palaeontologist, but nothing of her connection with the Society. Women weren’t admitted until 1945, so how was she able to interact with the Fellowship? I set out to investigate the connections. 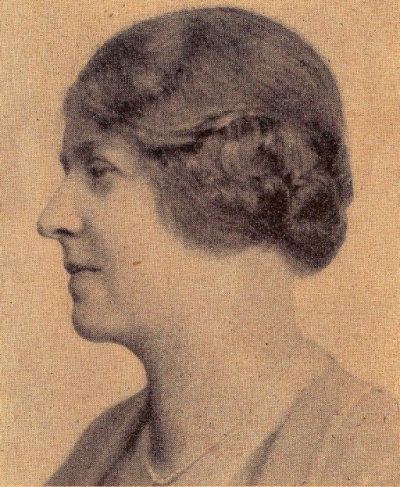 Portrait of Dorothea Bate from the Hungarian magazine Uj Idok, 1932

Bate began conducting fieldwork at her own expense in 1901, travelling to Cyprus aged just 22 to search for bones in ossiferous caves. Her initial discoveries in the limestone hills of Cape Pyla and the Keryina range were promising, including the remains of a new species of pygmy hippopotamus. Bate was convinced there were further unknown species to be unearthed and was desperate to continue, although low on funds.

At her request, Henry Woodward FRS, formerly Keeper of Geology at the Natural History Museum (NHM), where Bate was unofficially employed preparing specimens, applied for financial support from the Royal Society on her behalf. In 1902 he sent her a telegram reading only ‘Bate. Cyprus. Continue’. She had been awarded £30 (about £1700 today) by the Royal Society’s Government Grant Committee, the first public recognition of her achievements, and was able to continue her excavations. These continued to be fruitful, and in April 1903 her most significant find from the trip was submitted as a paper to the Royal Society and published in the Proceedings two months later.

Bate revealed that she had identified the fossils as belonging to a previously unknown species of extinct pygmy elephant specific to Cyprus. She announced:

‘I have come to the conclusion that it is specifically distinct from these other small forms [pygmy species of elephant discovered in Malta and Sicily], though possibly they were derived from a common ancestor, and I, therefore, propose to name it Elephas cypriotes’. 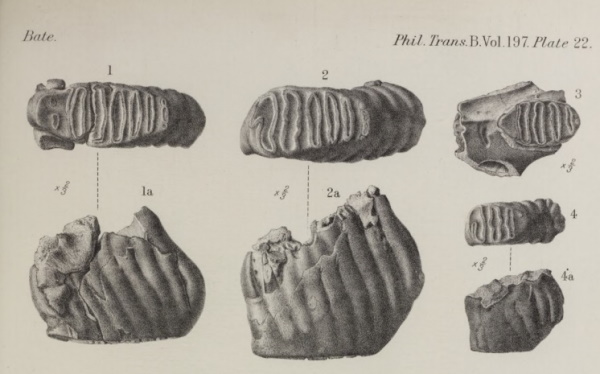 Just imagine the excitement and honour of getting to name a species! For Bate, there must also have been a sense of vindication in choosing a career as a palaeontologist, having struck out independently at such a young age. The paper is a fascinating read, hinting at the perseverance required in finding the elephant teeth and tusk fossils in the last and least promising of the deposits to be excavated:

‘Often not a single proboscidean tooth would be obtained during two or three days’ work, and only eleven molars and parts of molars were procured as the result of three weeks’ digging. It was then decided to continue excavations here for a short while longer’.

Bate’s paper announcing the discovery was communicated to the Fellowship at a meeting of the Society on 7 May 1903, but Bate would only have been at the meeting to hear her own paper if invited by a Fellow. I can’t wait to get back into the archive (when safe to do so) to check the Visitors’ Books to see whether she did in fact attend. We do know from a Royal Society Conversazione programme in the same month that ‘Remains of pigmy elephant and pigmy hippopotamus obtained from caves in Cyprus [were] exhibited by Miss Dorothy Minola Alice Bate’ (PC/3/3/4), and later in 1903 fossils were exhibited again, this time alongside some archaeological finds from Henry Woodward, who had secured her funding (PC/3/3/5).

Indeed, Woodward was a regular advocate for Bate in her interactions with the Society. In addition to her 1903 Proceedings paper, he went on to communicate her further discoveries in Cyprus and Crete. He would have been an advantageous ally. Well-established and connected, he was still on the payroll at the NHM despite having retired as Keeper of the Geological Department; he was also past-President of the Geological Society, Geological Association, Museums Association and Palaeontographical Society, as well as founder and editor of the Geological Magazine. He was known to be a supporter of young scientists at the start of their career, encouraging them to publish their earliest work.

Despite Woodward’s advocacy and the undoubted novelty of Bate’s pygmy elephant, there was some disagreement about whether two more detailed papers on her findings in Cyprus should be published by the Royal Society. In these works, Bate described differences in the fossil remains found in Malta and Italian islands, taking into account the geological histories of the islands and postulating that the Elephas cypriotes remains could be further investigated as an instance of a distinct species evolving through speciation – think Darwin and his Galapagos finches.

All papers submitted went through a process of peer review, and our series of Referees’ Reports show that while one independent reviewer, Edwin Tulley Newton, recommended publication (RR/16/144), a second, Richard Lydekker, disagreed. Lydekker contended that, in light of similar pygmy elephant species previously discovered on other Mediterranean islands, the Cyprian form was interesting but almost a ‘foregone conclusion’ that did not mark a real advance in science, and that Bate’s earlier Proceedings article was ‘amply sufficient’ (RR/16/145). 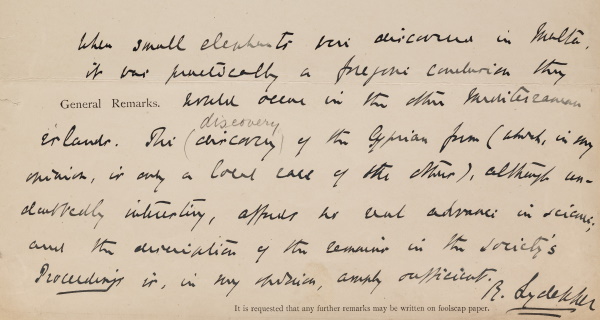 Richard Lydekker’s remarks on Dorothea’s Bate’s paper, from his Referee’s Report, 23 May 1904

In view of the differing recommendations the case was referred to the chair of the Society’s Geological Committee (NLB/28/826), who decided that the deadlock should be broken with a third review. The reviewer, William Blanford, recommended publication as a single condensed paper (RR/16/146), which Newton had also suggested, and the paper ‘Further note on the remains of Elephas cypriotes from a cave-deposit in Cyprus’ appeared in the Philosophical Transactions in 1905. Lydekker won out in 1907, however, when he recommended that a further Bate paper, this one on Cretan pygmy elephant remains, should not be published (RR/17/4).

The Royal Society arbiters of these publication decisions were all men, and despite her own undoubted merits Bate required an advocate within the Fellowship to take advantage of the funding, publishing and exhibition opportunities that the Society offered. However, geology and related disciplines were opening up to women in the early twentieth century, reflecting a slow trend in science more generally. Bate collaborated with many notable women in this vanguard: for example, in 1928 Dorothy Garrod, later Cambridge University's first female professor, invited Bate to participate in her excavations at Mount Carmel, near Haifa. The site is noted for its human remains and their significance in understanding human evolution. Bate’s contribution was on the fossil fauna, making pioneering observations on environment, including climate change, as a factor in the changing fauna she saw in the strata from different periods. She also made significant discoveries with Elinor Wight Gardner, including new species of extinct horse, tortoise and (of course!) elephant.

See a selection of photos from Garrod’s excavations at Mount Carmel from the Pitt Rivers Museum here: https://www.prm.ox.ac.uk/event/pioneer-of-prehistory

Dorothea Bate could in theory have been proposed and elected as a candidate for Royal Society Fellowship from 1922 onwards, but she never was. The Society has kept candidates lists and, since 1941, records of lapsed certificates of nomination, but there is no record of Bate being put up. That is certainly the Society’s loss.

Her output reflects her passion, competence and innovative thinking as a palaeontologist. Between 1903 and 1907 she published 15 papers on her Mediterranean excavations and the occurrence of dwarf species, in various journals – all had to be presented by Woodward. In total she published over 80 papers and reviews, becoming an established and well-respected member of the palaeontological community. Her biographer Karolyn Shindler notes that, during a long career at the NHM, Bate prepared fossils for many other leading palaeontologists who relied on her expert identification – even Richard Lydekker, despite his less-than-complimentary reviews of her early work. She eventually rose to the position of Officer-in-Charge of the Tring Museum in Hertfordshire, an outpost of the NHM, and continued to work until her death in January 1951 at the age of 72.