Mislabelled as a dinosaur bone, a rare femur of Paleoparadoxia rested in a drawer for 60 years, until it was fortuitously recovered and analyzed by curator Yuri Kimura and researcher Kumiko Matsui.

"An old wooden box was there. I read “bone specimen” on the note. Of course, I opened it!"

Yuri Kimura and Kumiko Matsui's discovery is reported in a paper published in Royal Society Open Science and here they tell us the story behind the incredible find.

How did you find the fossil?

Yuri Kimura: Paleontological collection rooms store treasures from the deep time! The treasures are, of course, various fossils, from microscopic planktons to gigantic vertebrates. They were uncovered from terrains ranging from soft sediments to hard rocks, with a vast amount of effort, in the field. Many of them are well-organized in cabinet drawers, but others remain unregistered and are left forgotten in the drawers as time goes by. With a trained eye and a bit of curiosity, palaeontologists could make new discoveries in museum cabinets. The collection rooms are just another fossil-hunting field. 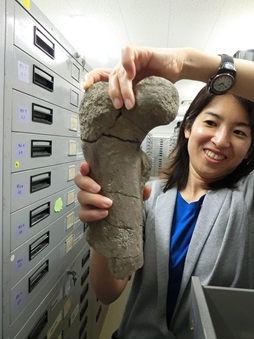 I, Yuri Kimura, am a curator of vertebrate palaeontology at the National Museum of Nature and Science, in Tokyo, Japan. I found the fossil by chance in one of the many drawers in the geological collection room at the University of Tsukuba, which is a neighbouring university to my workplace. As collection management is part of my duties, I visited the university to see how other museum facilities manage fossil collections. Classic steel cabinets caught my curiosity and I started pulling cabinet drawers. An old wooden box was there. I read “bone specimen” on the note. Of course, I opened it! What was in the box was beyond my expectation. It was not just a bone specimen. It was a fossil of a large femur, discovered in Fukushima, Japan, over 60 years ago. From basic morphological features, I knew that that fossil belonged to extinct aquatic mammals Desmostylia. I was thrilled!! This fossil was not known to the science community, not even informally.

Could you tell us about the history of this specimen?

Yuri Kimura: A big discovery often comes from a series of fortunate events. Although this fossil was unfortunately forgotten for decades in a cabinet, it was very lucky this time: Kumiko Matsui, a rare expert of the Desmostylia, happened to be a postdoctoral researcher in our museum at that time. The best person for the fossil was right here. Kumiko and I gathered a team to evaluate the scientific importance of the fossil. The second stroke of luck was that we were able to find two locals who knew about the fossil, owing to the kind support of a local tourist association. Thanks to the memories of the local man, who was a colleague of the discoverer, as well as a hand-written note kept with the fossil, we were able to recover two equally likely fossil locations even 60 years after the first discovery. This is very important because a fossil without geological information cannot be fully utilized in many studies. Kumiko carefully compared this fossil, which was known as a “dinosaur bone” by the locals, with other reported femurs of desmostylians and identified it as Paleoparadoxia. Through her comparative research, she found new diagnostic features for the limb bone of the group and provided them as emended diagnoses in this study. Despite this fossil being broken and missing the distal part, its surface morphology is well-preserved, showing even muscle scars. Future studies could utilize this fossil to reconstruct the posture of this mysterious mammal. 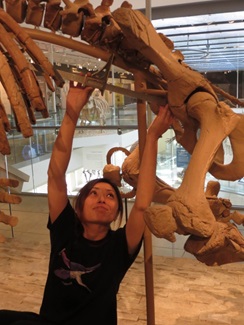 Kumiko Matsui: Desmostylians are one of the most common vertebrate fossils in Miocene strata in Japan. Their skeletal morphology greatly differs from other marine and terrestrial mammals. At first glance, I thought the fossil belonged to desmostylian Paleoparadoxia. But we needed to confirm it with evidence. As there are only limited comparative specimens for postcranial skeletons in Japan, I flew to Canada and the U.S. for detailed comparisons. In the end, I observed desmostylian fossils from Japan, Russia, United Sates, and Canada, and I confidently assigned the fossil to be Paleoparadoxia. My first paper was description of Paleoparadoxia forelimb, so I feel that Paleoparadoxia and I are linked by fate.

Yuri Kimura: Japan is an archipelago of geologically active islands, under the great influence of the subduction techtonics. In such places, vertebrate fossils are very rare and usually fragmentary. Complete head and full bodies of Paleoparadoxia were only found from Japan. This is because paleo-islands of Japan are part of the animal’s restricted habitat, the coastal margin of the northern Pacific rim, ranging from Japan in the west to Baja California in the east. Paleoparadoxia is certainly an iconic animal for the paleontological history of Japan. Its bizarre appearance has fascinated many researchers, and Kumiko is the youngest among them. 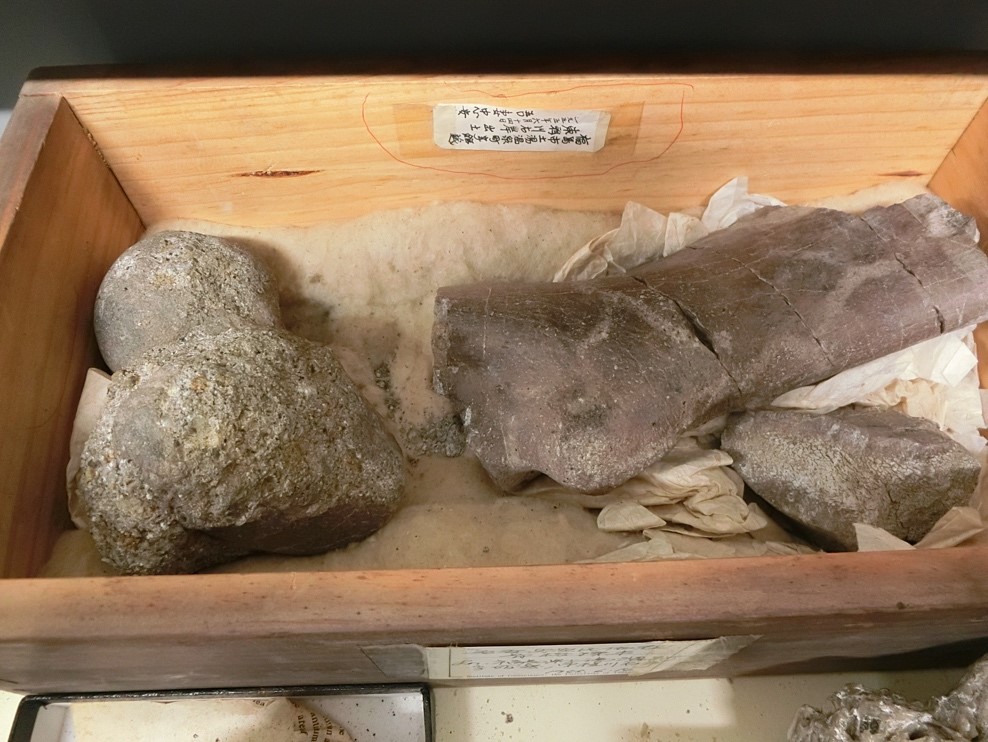 What new insights were you able to derive from this discovery?

Yuri Kimura: Museum collections are passed down from generations to generations, hopefully for thousands of years and more. When I curate museum specimens, I am aware that these specimens could foster big discoveries centuries later. Because of this, specimen information must be accompany museum materials.

A note associated with the fossil played an important role in our study. In our investigation, we learned that this note did not necessarily hold the original information, but it certainly took us to the right place. The scientific discovery is important. Nevertheless, we would like to emphasize the importance of original information associated with fossils. Specimen labels are critical for museum collections.

Royal Society Open Science is a fast, open journal publishing high-quality research across all of science, engineering and mathematics. To learn more and submit, refer to our Information for Authors page.