Louisiane Ferlier looks at Robert Boyle's ideas on how science should be financed and methods to ensure best practice.

How would one define Boyle's idea of ‘hopeful’ experiments? Is it a measure of the likelihood of success? Does it relate to the benefit – or hope – it would bring society, or is it an indicator of the desire of scientists?

Robert Boyle’s ‘to-do list’ remains one of our most popular blogposts on the Repository, and the original manuscript is a regular crowd-pleaser for tour groups visiting the Library. His almighty wish-list of discoveries (think – the art of flying, unsinkable ships, light armour…) was largely copied from the desiderata set out by Francis Bacon as a postscript to his New World of Sciences, thereby realising Bacon’s desire to see generations of researchers engaged in a common scientific programme.

Much has been said by Michael Hunter (pp.27-31 of this book), Vera Keller and Anna Marie Roos about the origins and meaning of the scientific desiderata. I would like to bring your attention to a lesser-known supplementary series of wishes also contained in the Boyle Papers. This ‘other wish-list’ (Boyle Papers volume 36, fols. 77-78), is a fair copy, in the hand of one of Boyle’s clerks, Robert Bacon. It repeats all the well-known inventions and discoveries, but adds more pragmatic solutions to improve scientific practice which are, as far as I can tell, unique to Boyle:

The prices and other recompenses assigned to inventors
The charges of hopeful experiments borne by the publick
A catalogue of what is performed with a particular account of the ways
A catalogue of desiderata and Polychrista
Recompense for Approximations
A revenue for tryalls
A council for advising
A collection of models and other informative things both natural and artificial. 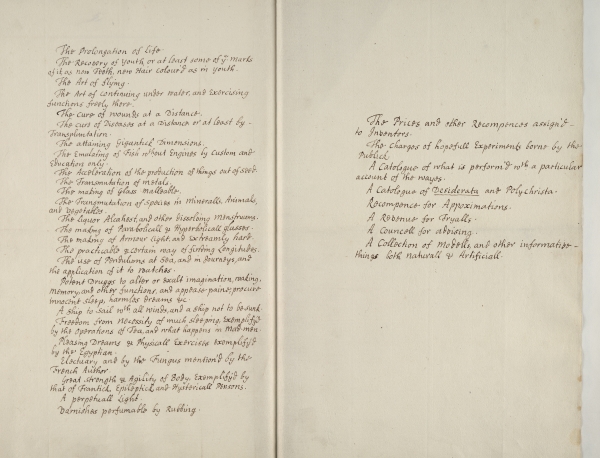 This additional list is definitely less entertaining than hoping for potent drugs, eternal youth and breathing under water; however, it resonates directly with current concerns regarding our research culture. It addresses how science should be financed and methods to ensure best practice.

The first line recalls that recognition of inventors was a primary concern of the early Royal Society at a time when only Royal monopolies existed (the first formal patent containing specifications was awarded in 1718 for a machine gun designed by James Puckle). Early Fellows considered for instance that publication and registration were major steps to settle priority disputes, and began by using the Philosophical Transactions and a Register of Papers, with mixed success. Interestingly, Boyle calls not only for recognition in name but, explicitly, in kind.

I find it particularly fascinating that Boyle would be interested in who should pay for science, experiments and inventions. The second line explicitly highlights the need for the public to support scientific endeavours. Boyle was a man of means and could – to a large extent – finance his own experiments. However, he recognised the need for public participation in science. Results from experimental research may benefit society at large, and so the public should therefore participate in the original costs of experimentation. But how would one define this idea of ‘hopeful’ experiments? Is it a measure of the likelihood of success? Does it relate to the benefit – or hope – it would bring society, or is it an indicator of the desire of scientists?

Boyle goes further than a vision of public funding for science determined by the applicability and usefulness of experiments, since he considers further that ‘approximations’ and ‘trials’ should be rewarded. This indicates that negative or inconclusive results should still be recognised with a steady revenue, and that intermediary steps and near-completions should also be rewarded. I personally hope that ‘approximation’ was also meant to apply to theoretical fields, but I doubt it. In any case, these questions are still at the forefront of current scientific funding.

The name of the game

The other items on Boyle’s supplementary list define ways to regulate the scientific community and its output. They also relate directly to the role the Royal Society played in early modern science.

Indeed, Boyle’s desire to see a ‘council’ advise scientists has been interpreted as a potential reference to the Royal Society, of which Boyle was a Founder Fellow. From the beginning, the Fellowship recognised the value of scientific work by checking and publicising theories, methods, discoveries and experiments.

Proposals 3 and 4 emphasise the importance of record-keeping for a robust scientific method. Within his list of desiderata, Boyle entices his readers to come up with their own varied programs of work and asks them to describe step-by-step their experiments and methods. This encourages a controlled environment, verification and reproduction. It strikes me that scientists have adopted those two pieces of advice nearly in full. However, one of the underlying reasons for Boyle’s attention to record-keeping was posterity, which has been somewhat lost as fewer and fewer scientists preserve their notes, drafts and intermediary output. It is partly thanks to Boyle’s obsession with record-keeping – which he shared with many other natural philosophers – that the Royal Society archive is such a unique collection.

Interestingly, Boyle also hopes for ‘a collection of models and other informative things both natural and artificial’, a vague definition which could well be a description of the Royal Society’s Repository, its collection of objects classified into natural and artificial. There are many remnants of the repository in our archive today, but that is a story for another time.

It seems to me that in many ways, his additional wishes were partly made true with the institution of the Royal Society to which Boyle contributed so much. Although the Society did not as such become a regulator of the scientific community, the Fellowship did relay many of Boyle’s recommendations. This additional to-do list is therefore less imaginative but definitely as crucial – if not more so – in our understanding of the origins of the modern scientific method.