Let there be light - and colour!

How many Fellows of the Royal Society can you spot in Raoul Dufy’s fresco ‘La Fée Electricité? Louisiane Ferlier takes a look.

Although many elements of the ‘Electricity Fairy’ are allegorical representations, the overall narrative structure consists of a chronological illustration of the scientific progress in our understanding and mastery of electrical power.

While looking for inspiration for our digital exhibits, I discovered that a view of Raoul Dufy’s fresco La Fée Electricité is available online for everyone to admire.

‘The Electricity Fairy’ is a large mural narrating the history of the observation, experimental development and commercialisation of electricity. It covers nearly 600 square metres, and is a beautiful explosion of luminescent colours.

Composed of 250 individual panels, the artwork was commissioned from the painter Raoul Dufy for the ‘Pavilion of Light and Electricity’ in the 1937 Paris International Exhibition. Instructions for the commission were drafted by Paris’s main electricity company at the time, the Compagnie Parisienne de Distribution d’Electricité, and part of the painting acts as a convincing advertisement for their flagship power-station of Ivry-sur-Seine, which opened in 1924. The fresco was donated in 1964 by France’s main electricity provider, EDF, to the Musée d’Art Moderne de la Ville de Paris, where it now occupies its own room, majestically. 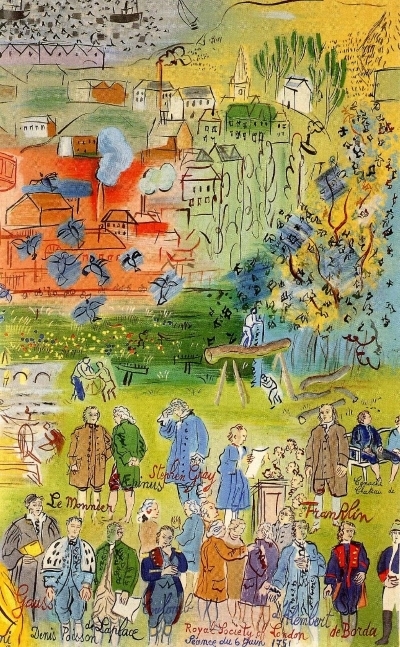 Although many elements of the ‘Electricity Fairy’ are allegorical representations, the overall narrative structure, from right to left, consists of a chronological illustration of the scientific progress in our understanding and mastery of electrical power. Many Royal Society Fellows and Copley Medallists are represented, in celebration of their electrical experiments and theories – men such as Isaac Newton, Joseph Priestley, James Clerk Maxwell and William Crookes.

The detail in this large ode to progress which warrants this blogpost is the presence of a group of bewigged men congregating around a podium, with the explanatory note ‘Royal Society of London, Séance du 6 Juin 1751’. Incidentally, this is also the title of a smaller lithograph (a little too pastel for my taste) made after Dufy’s original. I was quite baffled by the idea that a single meeting of the Royal Society – that of 6 June 1751 – would be so important that Dufy would recognise it as a landmark in the history of electricity, so I investigated further.

The main item of discussion entered in the Royal Society’s Journal Book for the meeting on 6 June 1751 (JBO/21) was the publication of a volume entitled Experiments and Observations on Electricity. The book was compiled to distribute Benjamin Franklin’s work on electricity, taken from his letters to Peter Collinson FRS. The volume went on to be reprinted 11 times in five languages, and remains a landmark in the history of electricity and in American science. Leading the discussion at the Royal Society meeting was one of the main experimenters on electrical current in Britain at the time, Royal Society Vice-President William Watson. He discusses in depth the validity of Franklin’s theories and experiments and, despite objecting to some of the conclusions, closes the meeting by celebrating Franklin’s crucial contribution. 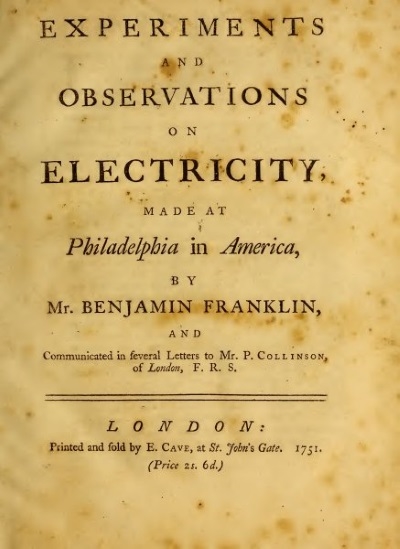 Title page of Experiments and Observations on Electricity, 1751

Benjamin Franklin was at heart of what is known as the Republic of Letters. His network of correspondents was international and the topics of his letters varied from politics to science. His interest in science led him to write to various Fellows of the Royal Society, including Watson and Collinson, a notable botanist and ‘middleman for an international exchange of scientific ideas’. Franklin’s recognition as a scientist derives almost entirely from his experimental work on electricity summed up in the ‘Experiments and Observations’.

Although Franklin is painted on his own in the ‘Electricity Fairy’, Dufy also commemorates his work by painting the congregation of Fellows on 6 June 1751. By doing so, he also recognises the importance of those who published, circulated and tested the validity of Franklin’s writings. Indeed, it took a group of Fellows in London to publish Franklin’s only scientific title – the first American edition appeared exactly 200 years later! The Experiments and Observations on Electricity also led to Franklin being awarded the Society’s Copley Medal in 1753, and to his election to the Fellowship in 1756.

What strikes me profoundly is the historical accuracy of Dufy’s reference. By 1936, Franklin’s scientific contribution to electricity was standardised in popular consciousness as the kite experiment. Yet Dufy does not recycle this inaccurate re-enactment of the experiment, but chooses instead to show Franklin in a stance reminiscent of a statue by Richard Park in Chicago, and to underline the importance of the Royal Society meeting in publicising Franklin’s contribution. This specific example demonstrates the painstaking research which went into the composition of a 600 square metre artwork.

In many ways, Dufy reminds me of William Morris. A craftsman as well as an artist, Dufy was commissioned for book illustrations, designed decorative fabrics, and was interested in the chemistry behind the production process that allowed his work to be reproduced on a larger scale. If you visit (virtually or in person) La Fée Electricité, you will be struck by the luminescence of Dufy’s colours. This is because he used a quick-drying paint specifically developed to retain transparency, and a magic lantern to go from the sketching stage (using live models) to the final fresco. The minutiae of his research comes out powerfully both in his artistic process and in the precision of his historical account.