Dr Clara Barker shares her experiences as an LGBT+ scientist.

A recent study showed that nearly a third of LGBT+ scientists thought about leaving STEM because of the environment compared to 16% of non-LGBT+ scientists. 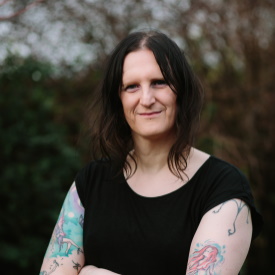 Dr Clara Barker is a research fellow at the Centre for Applied Superconductivity at Oxford University and Dean for E&D at Linacre College. She sits on various EDI panels including at the Royal Society.

I often hear that being LGBT+ has no bearing on my career as a scientist. While I would love this to be true, at the moment it is only an ideal that I hope will one day become reality. We know that people face barriers in STEM, and there are many reports of underrepresentation of race, gender or disability (1, 2). LGBT+ people are frequently told to hide their sexuality, or face open hostility for being transgender. As a result, we are more likely to leave STEM fields (3-6). A recent study showed that nearly a third of LGBT+ scientists thought about leaving STEM because of the environment compared to 16% of non-LGBT+ scientists. The same study showed that 28% of LGBT+ respondents sometimes considered leaving STEM and 20% of trans people felt like leaving often. I was one of those people.

I have shared my own story as a closeted trans person, including my observation that in 13 years working around the world I only met two openly gay scientists and none who were transgender. It is not unreasonable that I assumed I could not be LGBT+ and a scientist, so I hid who I was. This stuck with me for a long time and the effect on my mental health was profound. My depression affected my work and I came to hate science. Eventually I realised had to transition. I accepted that doing so meant the end of my science career, which meant I put little effort into publishing.

After transitioning my mental health improved dramatically. I was excited to see what life had to offer and I wondered what was next, as many job offers disappeared after coming out. I interviewed at Oxford expecting to face that discrimination and was surprised when I was interviewed based on merit and my skills; no comments on who I was. I thought they had made a mistake when I was offered the job. I took it, of course. Now I can be myself at work and in truth little has changed. Yet I put much more effort into my work now, and even rediscovered my passion for science. Still, my publishing ‘dry patch’ does impact my opportunities.

I started to share my experience and discovered that there are far more than two LGBT+ scientists, that I am not the only trans scientist. Sharing my story, I saw the profound effect on others around me. I often hear that I am the first trans scientist people have seen, that having a visible role model helps students feel better able to finish their STEM degrees.

Visibility is important. I assumed I could not be transgender and a scientist because I didn’t see others like me. Much like people with hidden disabilities, we cannot go through the history books and identify LGBT+ scientists. We have few stories to draw on and those we see, like Alan Turing, do not tend to be happy ones. However, social media has allowed me to see inspiring LGBT+ scientists around the world and at conferences like the LGBT STEMinar I have met them in real life. I no longer feel alone.

There are additional barriers. I never have the option to ‘not come out as trans’ when I submit a CV or share old research papers because I cannot change my dead (previous) name under which they were published. It is painful to me, and I avoid sharing my papers. My visibility means I get targeted online, even when I recently shared what I thought was an innocuous picture of myself outside the Royal Society, on the way to my first Diversity Committee meeting. I often see comments online from other academics asserting that homosexuality is a sin, or that trans people are a danger to non-trans people. Comments like these from colleagues say to me that I am not valued by them, as a human or as a scientist. I am told not to talk about being trans in science, yet it is frequently commented upon by those same people.

We are starting to see reports demonstrating the benefits of diversity. A recent report by consultancy firm McKinsey showed that diversity can lead to improved profits in the financial world, and there is growing evidence that diverse research groups may produce more papers and be cited more widely than average.  It is early days and we need more data, but it is a promising indication of why we should care about diversity, if supporting our colleagues is not enough.

To do this though, we need to acknowledge where we are failing. Honesty and openness are essential if we want to create real change, not just for LGBT+ people but for everyone. A recent report into the workplace climate for LGBT+ scientists was honest about the barriers we face, rather than pretending that they do not exist. And it is so important that we look at issues intersectionally so that we bring all groups up rather than just one or two.

I do believe things are changing. I know that I am valued by my university and organisations I work with. I have seen very public campaigns highlighting LGBT+ scientists by the learned societies: our work and contributions are being shared, our stories are heard. Of course, the few times I have been on TV it has been to talk about trans issues, and I just happen to be a scientist. We will know true inclusion when I am on TV talking about science and I also happen to be trans. If I get my own science show, that would be a lovely bonus.