The handles of Saturn

Rupert Baker tells the story of 'De Corpore Saturni', Christopher Wren's 1658 attempt to explain the shape of the planet Saturn.

Wren suggested that Saturn was surrounded by a thin elliptical ring, touching the planet at its narrowest points: ‘that elliptical corona, which ... represents the shape of handles.’

This was going to be an article about comets.

At the time of writing (24 July), I’ve been out in the garden the past few evenings hoping to be inspired by a glimpse of Comet NEOWISE in the northwest, only to be thwarted by a combination of clouds, London light pollution and inadequate binoculars – plus, I suspect, my own failing eyesight. Maybe comets are just not in my stars, as it were – looking back to this post from 2013, I was rather excited by the prospect of Ison (‘the comet of the century!’), and we all know how that didn’t work out.

Turning to look east, however, has been much more rewarding: some breaks in the cloud cover have afforded excellent views of Jupiter and Saturn, both close to opposition and bright in the twilight. I really should get around to buying a telescope, but this long-exposure digital camera shot taken by a friend does at least give you an idea:

As you’d expect, we have several images of both the gas giant planets in our archives: for example, the nineteenth-century watercolour of Jupiter from Tenerife which we featured in our Charles Piazzi Smyth post a few months ago. And going back to the years around the foundation of the Royal Society, there’s a paper by Christopher Wren which contains an amusing misinterpretation of Saturn’s rings, so – given that I’m ‘off’ comets and into planets right now – I thought I’d share it here.

Wren seems to have made telescopic observations of Saturn from the early 1650s, working at Wadham College in Oxford with Sir Paul Neile and William Balle. Around this time, improvements in telescope design led to a number of solutions being proposed to explain the curious ‘shape’ of Saturn, a problem dating back to 1610 when Galileo’s crude early instrument showed him what appeared to be a central globe flanked by two smaller ones.

As the recently-appointed Gresham Professor of Astronomy, Wren gave his own hypothesis in lectures delivered at Gresham College in the spring of 1658. He suggested that Saturn was surrounded by a ‘corona’ or thin elliptical ring, touching the planet at its narrowest points: in his own words, ‘that elliptical corona, which, touching the globe at two points equidistant from the poles, represents the shape of handles.’ He prepared a single illustrated manuscript copy of the lecture, under the Latin title De Corpore Saturni, at the suggestion of Gresham Professor of Geometry Lawrence Rooke; the picture below shows how he visualised the ‘handles’ as viewed from Earth at various points in Saturn’s orbit around the Sun. You’ll get the idea if you look at the model depicted top left, a copper representation of Saturn made by Wren to adorn a pedestal in Gresham College which supported a 35-foot telescope given by Neile: 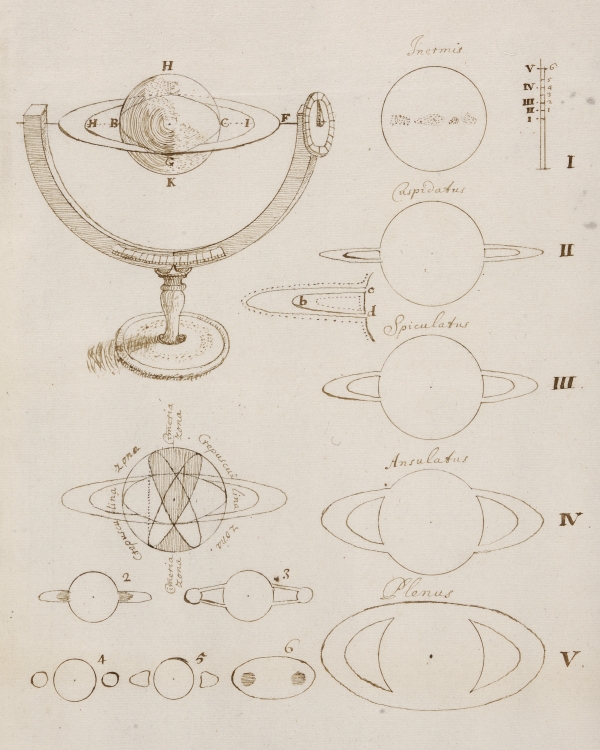 In early 1659, Wren became aware that the Dutch scientist Christian Huygens (other spellings are available) had set out a different theory to explain the shape of Saturn: a fully-detached ring around the planet. Wren conceded gracefully:

‘I confesse I was so fond of the neatnesse of [Huygens’s idea], & the Natural Simplicity of the contrivance agreeing soe well with the physicall causes of the heavenly bodies, that I loved the Invention beyond my owne…’

That should have been the last of Wren’s handles: he saw no need to publish De Corpore Saturni, and the single extant copy could languish unseen in a bottom drawer. However, the foundation of the Royal Society in November 1660 (by a group of 12 leaning strongly towards astronomy: Wren, Neile, Balle and Rooke were all present) kept the debate alive. When French mathematician Bernard Frénicle de Bessy sent the Society a similar ‘handles’ paper, read at a meeting on 4 September 1661, Wren – despite his preference for Huygens’s ring theory – was asked to dig out his original to establish his priority over the claims of Frénicle.

Wren, noting the unpolished state of his 1658 manuscript, asked Neile to act as a sole witness (‘I earnestly beg this favour of you … that you would keepe it in your hands & restore it again’), but it appears that his plea was ignored as several copies of De Corpore Saturni were then made and circulated; one of them ended up in the Royal Society’s Boyle Papers, and is the source of the picture shown above. It’s a document I often pull out for the amusement of tour groups (‘Look: Wren thought Saturn had handles!’) – rather mean of me, as Wren himself had swiftly and gracefully accepted the correct hypothesis, as any true natural philosopher should. Still, when you have St Paul’s Cathedral on your later CV, your reputation can probably survive a little gentle ribbing.

You can read the full story of Wren and the handles of Saturn in these Notes and Records papers on De Corpore Saturni and Sir Paul Neile. Do see if you can spot Saturn – and its ‘handles’, if you have a telescope – in the evening skies; by the time you read this, I shall have made a couple more attempts to see NEOWISE, but the weather forecast isn’t great. Ah well, Halley’s Comet is back in 2061!