From placement to publication: all before leaving school

Student Emilie Revill-Hivet tells us about her experience at the ISIS Neutron and Muon Source, which culminated in co-authorship of a recent Royal Society Open Science chemistry paper.

"I made two compounds from scratch during my placement: one of these was used for a structure determination and has since been added to the Cambridge Crystallographic database"

During a two-week placement at the ISIS Neutron and Muon Source, Europa school student Emilie Revill-Hivet 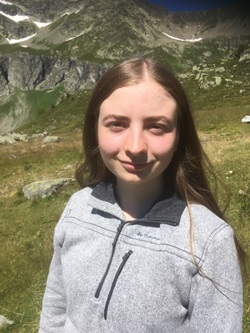 made and characterised a compound: lithium methanesulfonate, leading to the publication of an article in Royal Society Open Science.

The ISIS Neutron and Muon Source (ISIS) is a world-leading research facility based in South Oxfordshire that uses neutron and muons to study the properties of materials at the atomic scale. Through its parent organisation, the Science and Technology Facilities Council, ISIS offers work experience placements for school-age students. In 2019, ISIS welcomed 42 students for work experience, one of which was Emilie Revill-Hivet from the Europa School (Culham, UK).

Emilie spent a two week placement with Stewart Parker, an Individual Merit scientist based on the inelastic neutron scattering instruments at ISIS. Her time was split between two projects: one based on the computer, and one in the support laboratories that led to her work being published in Royal Society Open Science.

“I made two compounds from scratch during my placement: one of these was used for a structure determination and has since been added to the Cambridge Crystallographic database,” explains Emilie. “It’s surreal to see my name on the publication next to Stewart’s, my older siblings who are at university are very jealous!” 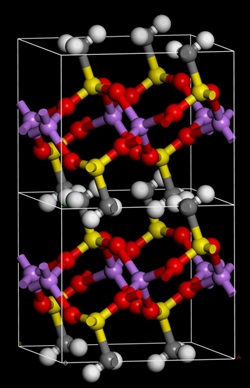 Emilie studies Chemistry and Biology at higher level as part of her European baccalaureate, but did not know much about ISIS before applying for work experience through STFC’s competitive annual application process. “The application was long, but it was a great opportunity. It was really interesting to work in a real research environment and I would encourage others to go for it!” 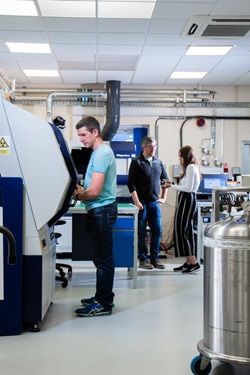 ISIS is based at the Rutherford Appleton Laboratory, which also hosts a number of other research facilities. Emilie explains, “during my placement I was able to meet other students who were working in different facilities, as well as go along to talks and workshops that were happening. Although the impressive site was daunting at first, everyone was very welcoming and helpful.”

The publication examines the relationship between the infra-red spectroscopy of the methanesulfonates and their bonding. Despite not having studied the technique at school before her placement, Emilie learnt how to use the machines and collect data. “It gave me a head start when I did begin lessons on infra-red spectroscopy,” she says. “It was also really cool to use the professional equipment in the ISIS lab.”

As well as Emilie’s work, Stewart 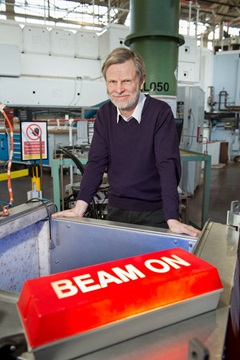 (pictured right) went on to measure the structures of the compounds using the Materials Characterisation Lab at ISIS (pictured above). “Our results show that the lithium methanesulfonate shows interaction between the lithium ion and the sulfonate group, whereas the same is not seen in the potassium equivalent,” he explains.

Stewart regularly takes work experience students, and they often return for summer placements during their undergraduate degrees. Emilie plans to study biology at university once she has finished her last year at school, and hasn’t written off applying for a summer placement in the future!

When taking on students, Stewart aims to give them a project that can be completed during their placement, allowing publication if possible. “I am hugely in favour of publishing Open Access,” he says. “I strongly believe that publically funded research should be publically accessible.” As a fully Open Access journal that is published by the most prestigious scientific society in the world, Royal Society Open Science completely matches this aim.

Emilie agrees on this point: “The fact the paper is Open Access means that I can show my friends and family the paper – even if they don’t understand the details!”

Previous publications from students working with Stewart include Jack Parker’s study of 2,5-diiodothiophene and Lisha Zhong’s work on other metal methanesulfonates, the latter also appearing in Royal Society Open Science. To find out about STFC’s work experience programme, and how to apply, visit their dedicated work experience webpage.