Virginia Mills looks at the Royal Society's early experiences in supporting scientific research, dating back to the mid-nineteenth century.

T.H. Huxley, a previous beneficiary himself, grumbled that administration of the grant was ‘the gravest and most troublesome business that the Royal Society has yet undertaken.’

Science grants are a hot topic in the UK national press at the moment, with challenging funding rearrangements, the creation of a new funding agency, and much else besides. It has always been that way of course, with controversy never far from such activities: we tend to think of research support as quite a natural idea, but in historical terms, it’s a relatively recent thing.

The Royal Society distributes an annual Parliamentary Grant for research, which commenced in the mid-nineteenth century. Before that, the Society had approached the Government or Crown for financial backing of particular projects, such as scientific expeditions, and was able to award some limited grants itself from a donation fund, distributed ad-hoc on application to the Council. Formal grant-making was an innovation proposed to the Royal Society by the Prime Minister, Lord John Russell, in a letter to the Society’s President on 24 October 1849. His offer was considered confidential and not entered into Council Minutes, which only record that Council thanked the government for the ‘liberal zeal for the promotion of science…exhibited in the offer made’. Immediately afterwards, the inevitable committee was established to consider its disbursement by the Royal Society. 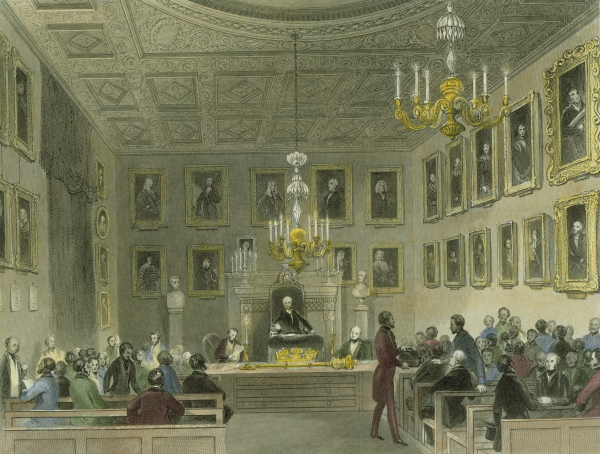 A meeting of the Royal Society at Somerset House c.1844, engraving by Henry Melville after Fredrick Fairholt (RS.4600)

By March 1850 the committee had reported back, recommending support for a narrow range of activities, mainly the reduction and publication of accumulated observations and the generation of new ones – astronomical, meteorological and others – assisted by the purchase, development and employment of new instruments. The committee explained this prioritisation of knowledge gathering and dissemination with the statement:

‘There are often details to be worked out before it is possible to employ usefully, newly discovered principles. In many of the sciences reductions are required before observations can be made use of. Both in science and art, facts technically called constants, are the materials of discovery; to determine them accurately is of great importance’.

This speculative attitude reflects the hope that the grant might be most beneficial if it were used to produce and share accurate, meaningful data: building blocks for a potential proliferation of useful discoveries. However, it also left room for general funding of ‘Private individual scientific investigation’, and of ‘other scientific objects that may appear to be of sufficient interest’ while not falling within the narrow, stated priorities. Funding private individual investigation from public funds may seem odd to us but reflects that in the mid-nineteenth century, science was still undergoing a process of professionalisation. There were fewer paid employment opportunities for research science, and much scientific investigation was still carried out by self-funded, learned individuals tangential to professional roles. Mechanisms for overseeing and reporting on use of funds were also formally put in place with the institution of the government grant.

The first grant round of 1850 had £1000 available to award (roughly the equivalent of £122,000 today). The sum wasn’t huge and the committee initially received only 11 applications for funding, all from Fellows of the Society. These ranged from Edward Sabine, requesting money to purchase instruments for Kew Observatory, to Richard Owen asking for aid in producing drawings of the skeleton of Megatherium, a prehistoric ground sloth. 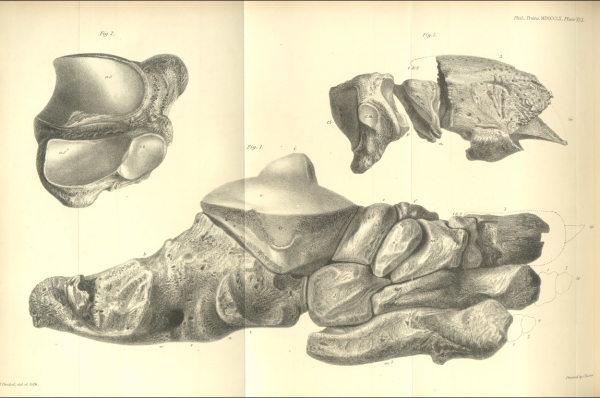 Illustration of the foot bones of Megaletherium Americanum, from an article by Richard Owen in the Philosophical Transactions of the Royal Society. Lithograph by J Dinkel, printed by Basire.

In its first few years it went on to provide funds to such Victorian scientific luminaries as George Gabriel Stokes, Lucasian Professor of Mathematics at Cambridge, and John Tyndall for his research on magnetism. Professor William Thomson (later Lord Kelvin) and James Joule received a joint grant of £100 in 1853 ‘for continuing experiments on the thermal effects experienced by air passing through small apertures’. These experiments had been instrumental in the pair’s discovery of the eponymous Joule-Thomson effect, which describes the thermodynamic behaviour of gases, and was an important step in the acceptance of kinetic theory which established the principal concepts of thermodynamics. Other recipients, together – interestingly – with unsuccessful applicants, can be browsed in the lists printed in the Minutes of Council, giving us a glimpse into these early funding decisions and mechanisms.

By 1876, the value of the government grant was raised to £4000 and the Society began to have serious qualms about the responsibilities involved. Rather than embracing the Government’s largesse, T.H. Huxley, a previous beneficiary himself, grumbled that it was ‘the gravest and most troublesome business that the Royal Society has yet undertaken.’ Huxley and his peers had the twin concerns of accusations of jobbery in the press (many grants went to London-based Fellows) and of maintaining independence: arms of Government might propose research to be funded from this source.

Huxley’s prediction was correct in that the later nineteenth century saw the creation of subject-based Government Grant Boards and an ever-growing set of regulations to order the administration of the Grant. And this was not the only pot of money that the Society had by then: the Donation Fund (the Society’s precursor to the Government Grant), the Scientific Relief Fund (established in 1859) and numerous Trusts took up a significant proportion of Council time. By the twentieth century, the Society had become a serious funder of science.

Today, the giving of grants is one of the main activities of the Royal Society, with a much wider scope, greater scale and increased diversity of recipients than the initial batch of 1850. The current Parliamentary Grant comes to the Royal Society via the Department for Business, Energy & Industrial Strategy, with funding allocation decisions made by panels of leading scientists through diverse funding schemes administered by the Society.

The Parliamentary Grant goes toward funding research and industry fellowships and professorships from early career onwards, with the aim of strengthening the UK science base, as well as many other schemes including international collaborations. It also funds some of the work of the Society itself including education policy work and a public engagement programme, and is heavily supplemented by other funds raised by the Society and its benefactors.

Find out more about how the Royal Society is funded and the Parliamentary Grant is dispensed in our financial reports and statements.  We’ve certainly come a long way from the original £1000 of government money focused on meteorological, astronomical and magnetic data.