Jon Bushell tells the story of the significant excavations in Kent's Cavern, Torquay, carried out by William Pengelly FRS.

Pengelly’s work, according to his obituary, ‘established beyond all doubt the existence of palaeolithic man in the Pleistocene Age, and caused the whole of the scientific world to awake to the fact of the vast antiquity of the human race.'

If you’ve ever looked into the history of early humans in Britain, there’s a very good chance you’ve heard of Kent’s Cavern in Torquay. It’s where the oldest known fossil of an early modern human in Northwest Europe was discovered, estimated to be around 40,000 years old. It’s now written as Kents Cavern – the apostrophe seems to have gone missing over the years – but I’ll stick with the original version to match the documents in our collections.

Evidence exists to show that the cave has been visited continuously in modern times as well. Roman coins have been found there, and numerous inscriptions from explorers can be seen on the walls, the earliest dating to 1571. It wasn’t until the nineteenth century, however, that systematic excavations of the cave were carried out, the most significant of which began in 1865 under the watchful eye of William Pengelly FRS. 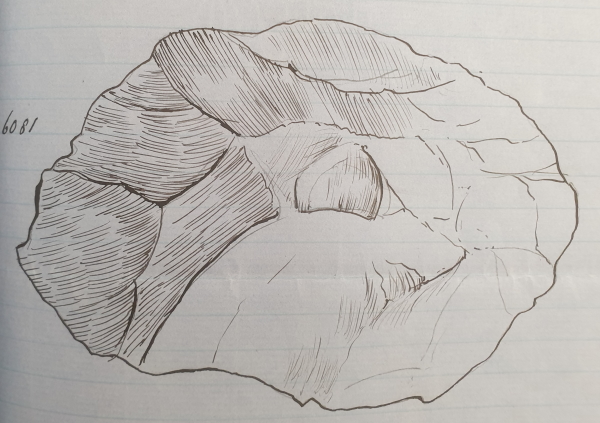 Pengelly was born in East Looe, Cornwall, in 1812. His scientific knowledge was largely self-taught, as he left school at 12 to work on his father’s ship. Nevertheless he had begun publishing scientific papers on geology by 1849, and was elected to the Royal Society in 1863 following the publication of his work on the geology of Bovey Tracey in Devonshire.

Pengelly carried out two significant excavations in Kent’s Cavern. The first lasted from 1846 to 1858, at the behest of the Torquay Natural History Society who wanted specimens from the cave to display in a new museum. The second began in 1865 and continued until 1880, this time under the auspices of the British Association. Pengelly undertook both excavations with Edward Vivian, the joint owner of the Torquay Bank who was also a founding member of Torquay’s Natural History Society.

Kent’s Cavern is located inside a limestone hill on the headland to the northeast of Torquay harbour. The floor of the cave is covered with limestone blocks and a substance pleasantly referred to by Pengelly as ‘black mould’. This is a layer of rotting leaves and other vegetable matter, typically between three and twelve inches thick. Amongst this detritus were artefacts from more recent human activity, such as the Roman coins mentioned earlier. Beneath this lay the stalagmite floor of the cave, up to five feet thick in some places. A limestone deposit of this thickness would take many thousands of years to form, and so it stands to reason that anything beneath this layer must be older still. It is in this cave earth that the fossils of extinct animals were found, along with an abundance of flint implements providing evidence of early human habitation of the cavern. 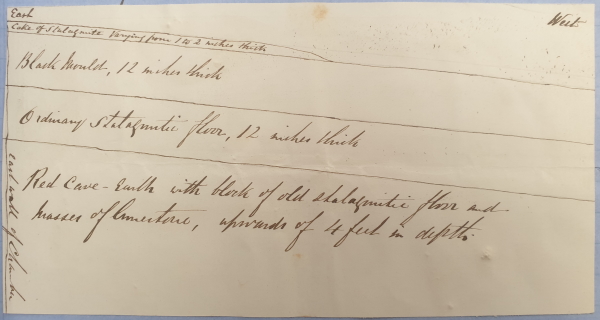 Sketch of a cross-section of the cave floor, from Pengelly’s twenty fifth progress report to the British Association, dated 8 July 1867 (from MS/222)

What’s most surprising is that this evidence was first discovered 40 years before Pengelly’s 1865 excavation even began. In 1825 a local antiquarian named Thomas Northmore partnered with William Buckland FRS to explore Kent’s Cavern. Buckland had carried out a similar investigation of fossils in Kirkdale Cave in Yorkshire, which earned him the Royal Society’s Copley Medal in 1822. The pair were joined by John MacEnery, a Catholic priest from nearby Torre Abbey, who had no scientific background and certainly made for an unlikely geologist. Nevertheless, MacEnery was the member of the trio who recognised the importance of the flint tools they discovered beneath the stalagmite floor.

MacEnery was convinced this was evidence of early humans living tens of thousands of years ago. Sadly, his theories did not get the recognition they deserved during his lifetime. The finds in Kent’s Cavern predated contemporary understanding of the age of the Earth, and so MacEnery’s conclusions were dismissed by many, including Buckland. His manuscripts were presented to the Torquay Natural History Society after his death, and his writing informed much of Vivian and Pengelly’s work in Kent’s Cavern. Their expedition into the cave in the 1840s provided yet more evidence to support MacEnery’s conclusions, though once again these findings were largely dismissed by the scientific community.

Sketch of a bronze artefact found during the excavation of the Wolf’s Den in Kent’s Cavern, included in Pengelly’s seventy second report to the British Association, dated 9 January 1872 (from MS/222)

In the 1850s and 60s opinions began to shift in their favour, however. Works such as Charles Darwin’s On the origin of species and Charles Lyell’s Geological evidences of the antiquity of man were among numerous works helping to reshape understanding of geology and anthropology. Meanwhile, Pengelly had explored the recently discovered Windmill Hill Cavern at Brixham in 1858. Being among the first to investigate the cave, he was finally able to demonstrate beyond any doubt that that flint implements buried beneath the stalagmite floor were genuine.

It was against this background that the British Association approached Pengelly and Vivian in 1865. Could the pair find unquestionable proof of early human habitation of Kent’s Cavern? Their solution was to undertake a systematic excavation far more rigorous than any previously attempted, investigating each individual chamber and passage in turn. First the upper layer of black matter was removed and examined to identify any modern artefacts. Workers then dug through the stalagmite floor and down into the earth beneath, with the exact location and depth of any finds being recorded. It was slow, methodical work. Excavation of the Southwest Chamber, for instance, began in January 1868 and took more than a year to complete. 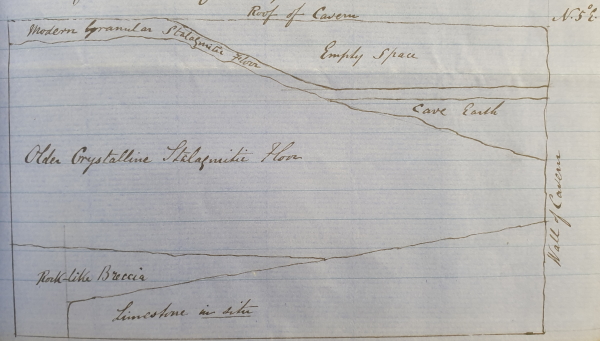 Sketch of a cross-section of the cave floor in the Southwest Chamber, from Pengelly’s thirty eighth progress report to the British Association, dated 5 October 1868 (from MS/222)

Not only was this excavation more methodical than earlier attempts, Pengelly and Vivian also dug down far deeper than before. The red clay of the cave earth in turn sat on top of a second stalagmite layer of a crystalline structure. Underneath this second floor was breccia, vastly different to the cave earth above and much, much older. Even at this depth the excavation unearthed flint tools belonging to prehistoric inhabitants, alongside ancient fossil remains of bears and lions.

These discoveries pushed the chronology of human prehistory back much further than ever before. When giving a lecture about Kent’s Cavern in Glasgow in 1873, Pengelly compared their work to Lyell’s Antiquity of man and stated that ‘We have made discoveries since which, I hold, have at least doubled that antiquity’. The extensive studies of Kent’s Cavern and Windmill Hill Cave played a huge role in advancing our understanding of prehistoric people. By the time the excavations at Kent’s Cavern were wrapping up in 1880, Pengelly was nearly 70, but the truth of early human occupation of Britain was no longer in question. 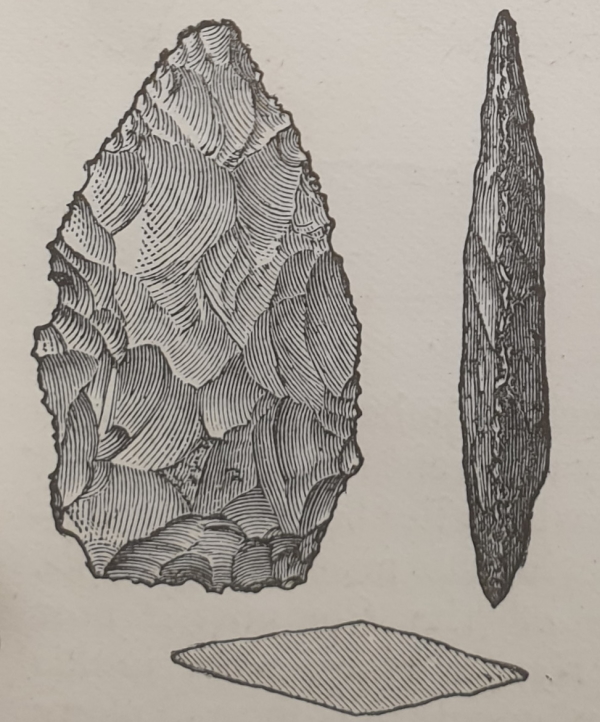 Image of a flint implement found in Kent’s Cavern, from John Evans’s The ancient stone implements, weapons, and ornaments of Great Britain (1872). Reproduced in William Pengelly’s Kent’s Cavern: its testimony to the antiquity of man (1876)

In Pengelly’s obituary in Nature, William Boyd Dawkins FRS wrote that his work ‘established beyond all doubt the existence of palaeolithic man in the Pleistocene Age, and caused the whole of the scientific world to awake to the fact of the vast antiquity of the human race’. It’s fortunate that Pengelly was such a persistent scientist: without his meticulous work we might still be in the dark about the ancient inhabitants of Kent’s Cavern.