Jon Bushell explains how a project to re-photograph more than 5,800 Royal Society Election Certificates has resulted in a much-improved digital resource.

The certificates are an invaluable resource for studying the nature of the Fellowship and the relationships between the Fellows themselves.

The Royal Society Library, like many archives the world over, has been closed to the public for much of the last 18 months. When researchers are unable to view our collections in person, it’s more important than ever that we have an effective strategy for improving digital access.

One of the Library’s earliest digitisation projects involved the certificates of candidature for election to the Fellowship of the Royal Society (or ‘Election Certificates’, as we refer to them). First introduced in 1731, these documents have played an important role in the election process for new Fellows right up to the present day.

At a Council meeting in December 1730, a change to the statutes governing the Royal Society was made, requiring that candidates for the Fellowship be proposed for election by at least three current Fellows. The proposers would need to sign a certificate bearing the name of the candidate along with a short citation outlining the candidate’s suitability for Fellowship. These were displayed at the ordinary meetings of the Society for several weeks before the Fellows were balloted on whether to admit the candidate or not.

While the election process underwent significant changes in the nineteenth and twentieth centuries, the information captured on the election certificates has remained largely unchanged – if a little more detailed – into the present day. As such, they are an invaluable resource for studying the nature of the Fellowship and the relationships between the Fellows themselves. 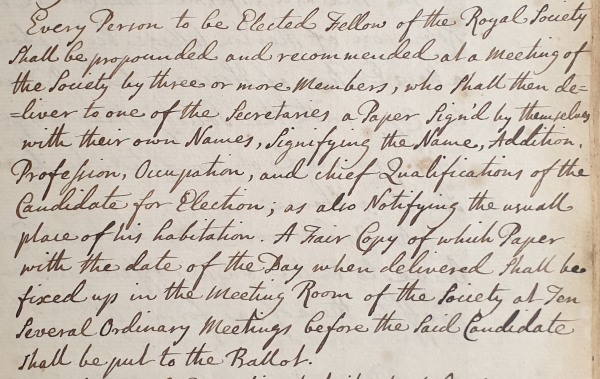 Draft of the new statute that first proposed the use of election certificates (Council Minutes, 7 December 1730: CMO/3/31)

Digital images of the election certificates were made accessible to the public for the first time in the early 2000s. We’ve made numerous improvements to our Library webpages since then, most recently with a catalogue upgrade in autumn 2020. One thing we haven’t changed is the images themselves, which were copied from microfilm reels. At the beginning of 2020, we put together a plan to re-photograph more than 5,800 certificates up to 1975, before the global pandemic delayed the project by more than a year. Photography was completed last month and it’s fair to say they’ve been worth the wait. To give a quick idea of the improvement, here’s a comparison of a snippet from Charles Darwin’s election certificate: 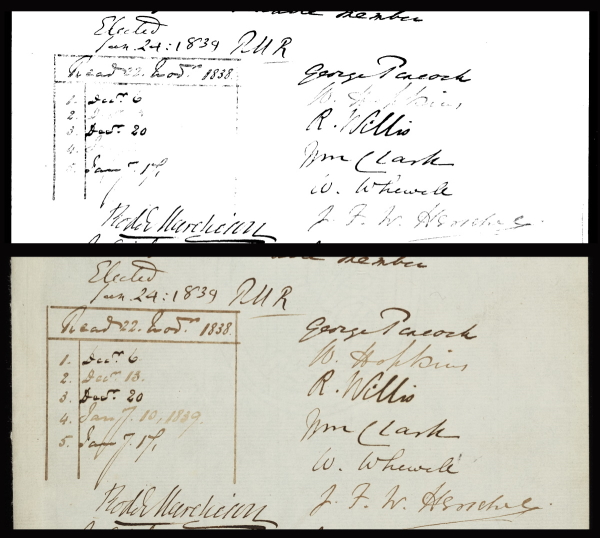 The difference is a significant improvement in legibility. In this example, the table contains the dates of the meetings where Darwin’s certificate was on display for Fellows to read and perhaps add their signatures of support. Two of these dates are impossible to read on the old image where the ink has faded on the original. Likewise, the signatures of William Hopkins and John Frederick William Herschel, two of the sixteen Fellows who championed Darwin’s candidature, are far more visible in the new version, which provides a much more accurate colour representation of the original certificate. The upgrades also reveal details entirely absent from the earlier digital images, such as this watermark on the certificate of Edward Forster from 1801: 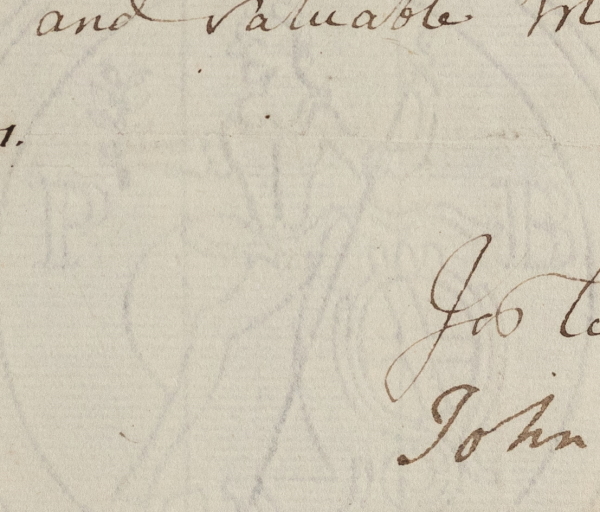 The election certificates were introduced by the Royal Society to ensure that a candidate’s scientific credentials were considered. At the end of the seventeenth century the weekly meetings were sometimes poorly attended, though the Society’s fortunes had recovered significantly by the end of Sir Isaac Newton’s presidency in 1727. Certificates began to broaden the Fellowship beyond just wealthy gentlemen: for example, instrument-maker William Harrison, who worked with his father John on the famous marine chronometer and was elected to the Fellowship in 1765. 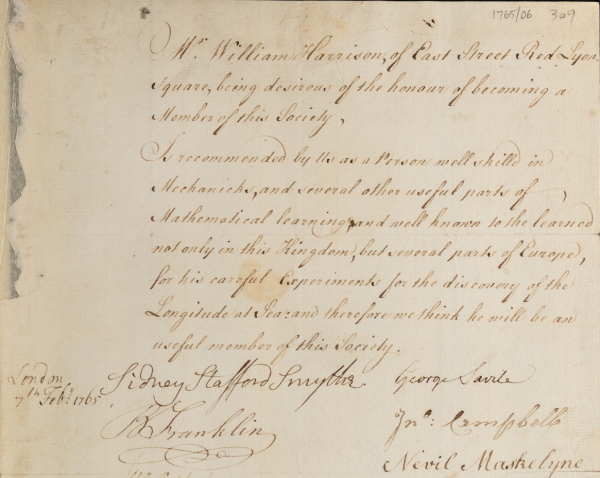 Citation from the election certificate of William Harrison (EC/1765/06). He was proposed by 23 Fellows, including Benjamin Franklin, whose signature can be seen at the bottom left of this image

It should be said that the introduction of election certificates didn’t transform the Fellowship overnight. Election certificates weren’t compulsory, and not all Fellows were elected on merit alone; in particular, peers and foreign diplomats could still be fast-tracked into membership of the Society. Nevertheless, 1731 marked an important step towards strengthening the scientific foundations of the Fellowship. The reforms to the election process introduced in 1847 took this much further. Elections took place annually, rather than at meetings throughout the year, and the number that could be elected each year was capped. By restricting the intake of new Fellows in this way, much greater emphasis was placed on candidates’ scientific background and accomplishments.

One limitation that none of these reforms addressed was the absence of women in the Fellowship. Despite the Society’s occasional connections with individuals including Margaret Cavendish and Caroline Herschel, the question of women Fellows doesn’t seem to have been considered by Council before the twentieth century. Dr Felicity Henderson has written on this blog in the past about the failed attempt by several Fellows to propose Hertha Ayrton for the Fellowship in 1902. In the end, the first two women weren’t elected until 1945: X-ray crystallographer Kathleen Lonsdale and microbiologist Marjory Stephenson. 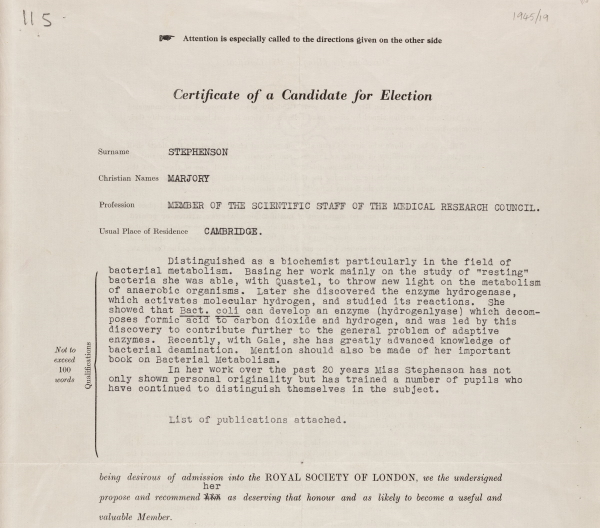 The election process for the Fellowship has continued to evolve over time, including the use of sectional committees to support Council: these subject-based groups review nominations in their field of science. This ensures a strong and diverse intake of new Fellows each year.

We continue to produce new election certificates, which are added to the archive. Public access to the certificates is restricted for 50 years from the date of their creation, to keep the names of proposers confidential. But over the next few months we’ll be gradually working through the catalogue entries for historical certificates and replacing the old images with higher quality ones. So keep an eye out for them!