Dish of the day

Jon Bushell reports on a 1960s dispute at the Arecibo Observatory in Puerto Rico, documented in papers in the Royal Society's archives.

The observatory has appeared in several films, including the final showdown in James Bond’s 1995 outing 'Goldeneye', and is also closely connected to the scientist Thomas Gold FRS.

You may have heard of the Arecibo Observatory, constructed in the early 1960s and centred on a 300m-wide reflector telescope dish in the mountains of Puerto Rico.

Even if the name doesn’t ring a bell, there’s a good chance you’d recognise it. The observatory has appeared in several films, notably serving as the location for the final showdown in James Bond’s 1995 outing Goldeneye. It’s also closely connected to the scientist Thomas Gold FRS, whose papers we hold in the archives here at the Royal Society. 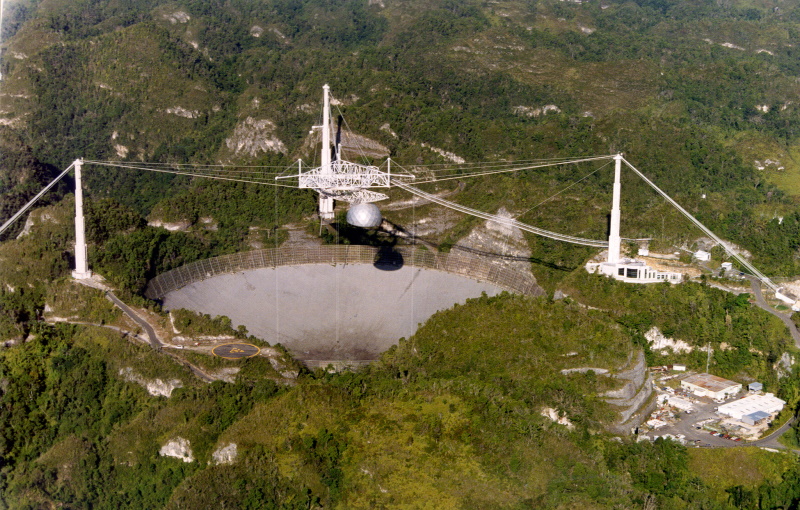 Thomas Gold was born in Vienna in 1920. His father was Jewish, and so his family fled to England in the 1930s to escape the threat posed by Hitler’s rise to power. Gold became interested in engineering and began pursuing a mechanical sciences degree at Trinity College Cambridge. However, in 1940 the British Government detained Gold along with thousands of other German and Austrian nationals, because of fears that Nazi spies were operating in the country. I’ve previously written about the experiences of Heinz Otto Schild FRS, another refugee scientist who was interned on the Isle of Man. For Gold, his imprisonment would go on to shape the rest of his scientific career. 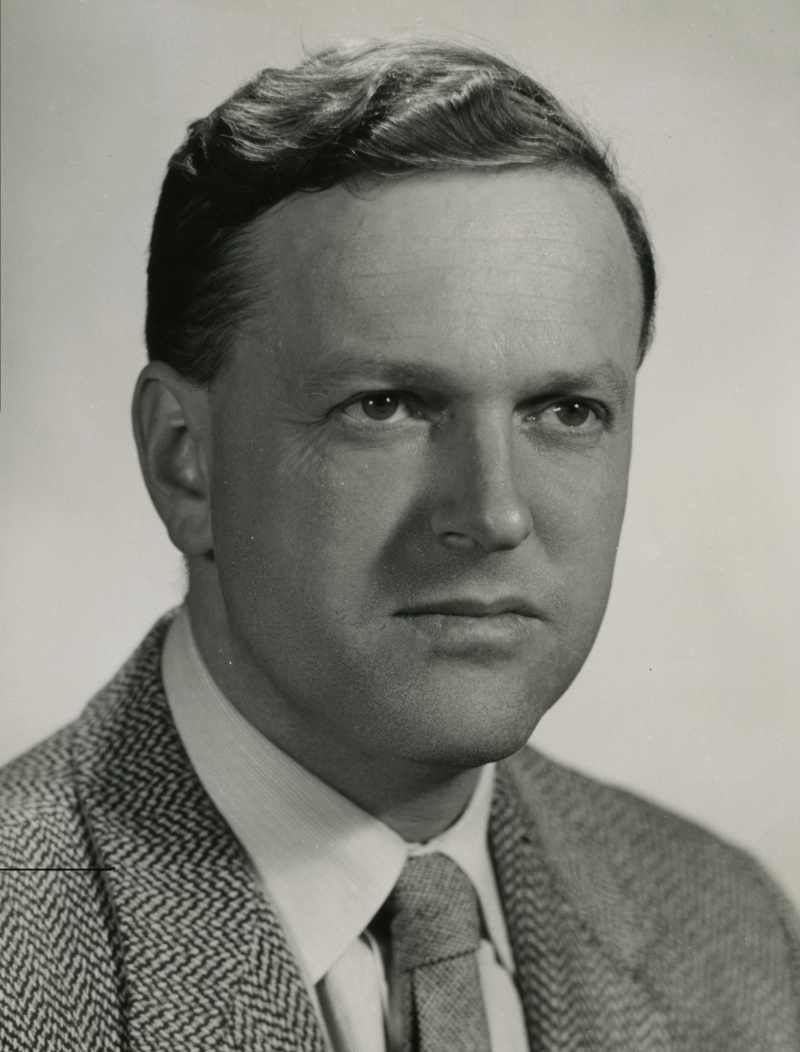 On his first night in confinement, Gold happened to meet Hermann Bondi, another refugee from Austria who had been studying mathematics at Trinity, and the pair became firm friends. They were both sent to Canada until finally being released in 1941 to return to Cambridge. By 1942, Bondi was working with Fred Hoyle on radar research at the Admiralty Signal Establishment (ASE) to assist the war effort and he convinced Hoyle to hire Gold as well. Their work was aimed at detecting enemy aircraft, but all three men were convinced that the technology had many potential applications for astronomy. 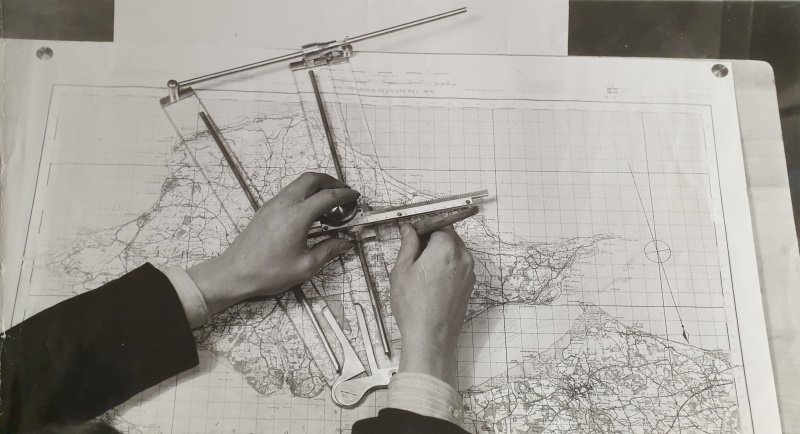 Gold demonstrating a device for mapping visible objects from a given location, which he invented while at the ASE (from TG/5/1)

Post-war, Gold worked for several years as assistant to the Astronomer Royal, Sir Harold Spencer Jones FRS, before moving to the USA in 1956. After a spell at Harvard, Cornell University offered him the chance to run the Department of Astronomy in 1959. Here, Gold established a dedicated group for Radiophysics and Space Research. Gold could see that the Arecibo Telescope, still in the planning phase when he arrived at Cornell, would be invaluable for radio astronomy. The only problem was that William E Gordon, one of the chief designers of the telescope who was overseeing its construction, didn’t exactly agree with Gold’s assessment.

Funding for Arecibo had come from the US Department of Defense, with the primary goal of studying the Earth’s upper atmosphere. With the Cold War well under way at the end of the 1950s, it was hoped that understanding the ionosphere would lead to new technologies for tracking and intercepting nuclear warheads. In an interview with Woodruff Sullivan in 1978, Gordon explained that Arecibo ‘was developed to do ionospheric things but it was apparent that that powerful a radar would be useful [in] radar and radio astronomy … those were kind of fringe benefits of building it’.

Cornell University decided that the observatory would fall under the control of Gold’s new research centre, which would allow time for radio astronomy as well as ionosphere research. Gordon, who was the first Director of the Arecibo facility, took the view that the operation should remain entirely independent, and he seems to have gone out of his way to avoid engaging with Gold on observatory issues. By the time the telescope was operational in 1963, the relationship between Gold and Gordon had broken down entirely. In a letter to the Provost of Cornell University in December 1963, Gold outlined his long list of complaints surrounding the management of Arecibo before ultimately threatening to resign: ‘I cannot possibly undertake to organise radio astronomy at Cornell except together with Arecibo’. 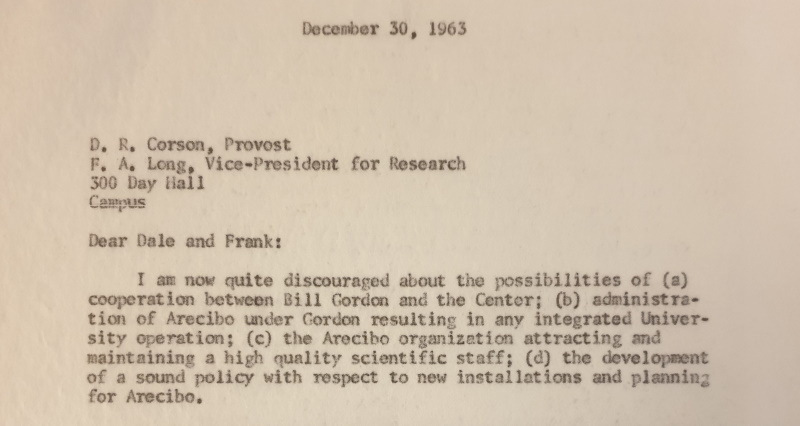 Gold was eventually persuaded not make good on his threat, but the unhappy situation surrounding Arecibo continued throughout 1964. Noted astronomers Frank Drake and Cyril Hazard had been convinced to join the new team at Cornell, on the understanding that they would be making use of the telescope. Drake, a key figure in the search for extraterrestrial life and famous for the Drake equation, would in 1974 go on to broadcast the Arecibo Message. Hazard had been a prominent figure at Jodrell Bank in the 1950s and was involved with early observations of quasars in the 1960s. Gold felt that the ongoing issues with Arecibo’s management threatened both appointments. By the autumn, it appeared the university had been won over to Gold’s side. In a letter to Vice-President Frank Long, Gold comments: ‘My planning is based on your statement that Gordon will be away from Arecibo and replaced as director of the Observatory by next September’.

John Findlay, who was based at the National Radio Astronomy Observatory in Green Bank, West Virginia, took over from Gordon as the director of the Arecibo Observatory in the summer of 1965. This new appointment certainly suited Gold, and despite Findlay’s appointment only being for one year, there were attempts to convince him to stay until 1967. In the end, Drake succeeded him in the summer of 1966, and under his tenure the focus at Arecibo very much shifted to radio astronomy work. Gordon, meanwhile, was unhappy with being recalled to Cornell and left the university shortly after losing his role as Director.

The Arecibo Observatory played a hugely important role in the field of radio astronomy in the following decades. There was a particular focus on studying pulsars following their discovery by Jocelyn Bell (now Jocelyn Bell Burnell FRS) in 1967, and the observatory was at the heart of the Search for Extraterrestrial Intelligence. Unfortunately, funding for the site began to wane in the early 2000s, and tropical storms damaged the telescope several times in the last decade. Finally, December 2020 saw the supports for the central platform give way entirely, sending the main receiver crashing through the dish below. 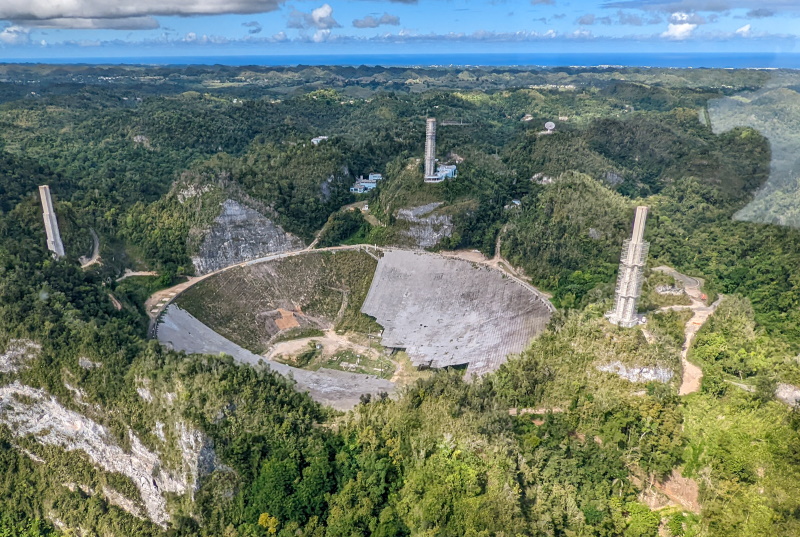 The telescope is now in the process of being dismantled, though there are possible plans to build a replacement at the same site. We can only hope that future staff at the observatory don’t get their signals crossed as badly as Gold and Gordon did.