New research in Proceedings B investigates whining vocalisations in puppies and their perception by humans.

Imagine hearing a puppy’s whine. How would you react? Most of us won’t remain indifferent and will check whether this cute and defenceless little animal needs our assistance. But, why are these distress calls so efficient at drawing our attention? 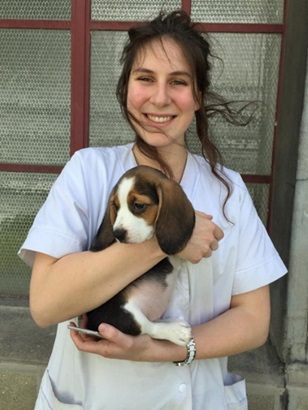 vocalisations containing acoustic perturbations, known as nonlinear phenomena. Yet, the communicative function of these perturbations remains debated. A new study in Proceedings B conducted by Mathilde Massenet and colleagues found that nonlinear phenomena added to puppy whines increase perceived distress by human listeners, including experienced puppy caregivers. Lead author Mathilde Massenet (pictured here) from the University of Saint-Etienne, France tells us more about the study.

Imagine hearing a puppy’s whine. How would you react? Most of us won’t remain indifferent and will check whether this cute and defenceless little animal needs our assistance. But, why are these distress calls so efficient at drawing our attention? A likely answer to this question is the highly common presence in whines of nonlinear phenomena. Indeed, these vocal irregularities are responsible for the perceptual harshness, typical of many animal distress calls including human babies’ cries. However, are they actually responsible for our perception of distress in puppies’ calls? Until recently, it was difficult to answer such questions, due to the lack of methods allowing to systematically vary the extent of nonlinear phenomena in animal vocalisations.

In this study, we used a state-of-the-art synthesis tool developed by co-author Andrey Anikin to create puppy whines in which we experimentally added different levels of nonlinear vocal phenomena. We then played these acoustic stimuli to more than 400 human listeners, including professional puppy caregivers such as dog breeders and veterinarians, and asked them to rate how distressed the whining puppies sounded. We found that human listeners were sensitive to the acoustic properties of whines as they perceived higher levels of distress in more chaotic calls. We also found that professional caregivers, who declared that they used whines to assess the puppies’ needs, had developed a more fine-tuned ear as they also paid attention to more subtle acoustic perturbations. This suggests that human sensitivity to chaos in puppy whines is shared by most human listeners, but that sensitivity to other nonlinear phenomena may also arise in experienced listeners for whom assessing puppies’ needs is important for adjusting care. 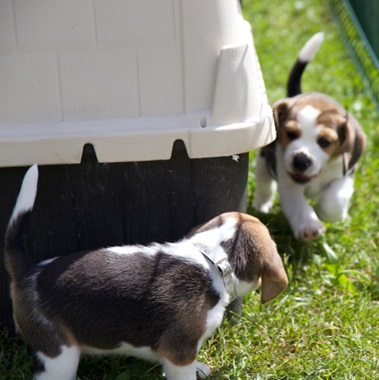 Our work leads to another exciting question: do puppies “cry wolf”? Indeed, dog domestication may have favoured the production of nonlinear phenomena in whines as a means to exploit humans’ sensitivity to these harsh sounds. Future work could indeed contrast the production of nonlinear phenomena within the whines of domestic dog puppies and wolf pups to answer this question.

Mathilde Massenet is a PhD student from the ENES lab of the University of Saint-Etienne (France). Under the supervision of Profs. David Reby and Nicolas Mathevon, and in collaboration with Dr Andrey Anikin, Dr Katarzyna Pisanski and Dr Karine Reynaud, she studies the vocal communication of domestic dog puppies. More specifically, her aim is to understand what kind of information puppy calls convey to their mother and to human caregivers.

Dr Andrey Anikin is a postdoctoral researcher from the University of Lund (Sweden) and the ENES lab (France), working on human nonverbal vocalisations. He has recently developed a tool for parametric sound synthesis that we used to create our acoustic stimuli (soundgen R package).

Dr Katarzyna Pisanski is a CNRS researcher from the ENES lab and the DDL lab (University of Lyon 2, France). She studies the development, mechanisms and functions of vocal communication, with a strong focus on the study of human nonverbal communication.

Dr Karine Reynaud is a reproductive physiologist from the INRAE (National Research Institute for Agriculture, Food and Environment, France) and the vet school Maisons-Alfort (France), working on the developmental and reproductive biology in mammals, including dogs. She supervised the breeding of the Beagle dogs and facilitated the recording at the vet school.

Prof. David Reby, who supervised the project, studies the origin, structure and function of vocal signals in vertebrates. By identifying animal precursors of key features of human communication and cognition, his work provides essential background for understanding the origins and evolution of human speech.

Tell us about your publishing experience in Proceedings B

This is my first article and the editorial team at Proceedings B made it a very pleasant experience! The reviewers provided very constructive and useful feedback—this led us to collect additional data and greatly improved our study. Also, the reviewing was very quick.

Proceedings B, animal behaviour, vocalisation, puppies, behind the paper