Now for the space weather forecast

Dr Michael Aspinall, from 'Monitoring Extreme Space Weather' at the Summer Science Exhibition, reveals how the sun could destroy digital communications on Earth.

A massive power outage as a result of a solar storm could disable the power grid, communications, aviation and satellites for millions of people. Our new neutron detector will provide advance warning in the UK for the first time in a generation. 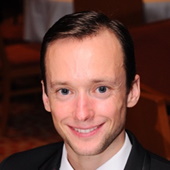 Dr Aspinall leads on a space weather project to design, implement and deploy a new generation of ground-level neutron monitors to enhance the capabilities of the Met Office Space Weather Operations Centre (MOSWOC). His research began during his degree in Mechatronic Engineering (2005) with contributions towards the design and implementation of an advanced neutron spectrometer. His PhD (2008) focused on real-time digital assay of mixed radiation fields. He then focused on developing this work into technology that has served several nuclear establishments around the world (2009-2015). He specialises in applying transformative technologies for radiometrics. He’s worked on instrumentation for characterising extreme nuclear environments, detecting reactor criticality and measuring waterborne radioactive contaminants.

On March 13, 1989 the province of Quebec in Canada suffered an electrical power blackout in a month when temperatures can be as low as minus 9°C.

The cause was a massive release of energy from the sun, witnessed three days earlier by astronomers who noticed an explosion with the energy of thousands of nuclear bombs.

This billion-ton plume of superheated plasma and radiation - known as a coronal mass ejection (CME) - headed towards Earth at a million miles an hour, with the accompanying solar flare immediately causing short wave radio interference.

On the evening of Monday, March 12, it struck Earth's magnetic field in a massive 'geomagnetic storm' which caused spectacular 'northern lights' as far south as Florida and Cuba.

In the early morning of March 13, the entire Quebec power grid lost power in what was the largest outage ever caused by a geomagnetic solar storm.

Millions of people suddenly found themselves in dark homes and offices without heating or light. Schools and businesses were closed, the Montreal Metro shut down during rush hour, and the airport was closed. In space, some satellites tumbled out of control for several hours and even the Space Shuttle Discovery was affected.

This was an extreme example of “space weather” which happens on average at least once a year. Typical solar activity 'sunspot' cycles can produce at least two or three large storms, so it is a matter of chance whether one will cause a blackout or not.

With our near total reliance on digital communications, this time the effect would be much worse.  No electricity means no computers, no communication, no navigation. Planes would be grounded, satellites disabled, and mobile phones useless. A prolonged power outage could even lead to a breakdown in the food supply chain with potential civil unrest.

The risks posed by space weather are now widely recognised; they are now listed on the UK National Risk Register of civil emergencies but the UK has not had an advance warning system since the early 1980s.

This is why Lancaster University, RAL Space at the Rutherford Appleton Laboratory and the Culham Centre for Fusion Energy are together developing a new ground-level neutron monitor.

Less than fifty neutron monitors worldwide are still operational and none of these are in the UK.

The UK Met Office is responsible for reporting space weather risks to government departments and civil aviation and our device will enhance the Met Office’s ability to predict and protect safety critical systems and national infrastructure.

The design of existing monitors and their instrumentation has changed very little over the last sixty years, relying on materials that are either highly toxic (boron trifluoride) or expensive (helium-3).

Our GLEEM (Ground Level Enhancement Event Monitor) project will develop and demonstrate a prototype network of new, compact, non-toxic instruments, that are suitable for unattended operation in relatively remote locations.

Within this project a network of two instruments will be demonstrated and benchmarked against existing ground level neutron monitors.

Find out about this exhibit and more cutting-edge science at the Royal Society's Summer Science Exhibition 2022.