A bit of binary

Anne McLaughlin finds some mathematical surprises in the Royal Society's oldest manuscript, dating back to around 1200 and donated by a controversial Shakespearian scholar.

If the use of the Hindu-Arabic numerals is considered ‘new’, the use of zero as a place holder is revolutionary. 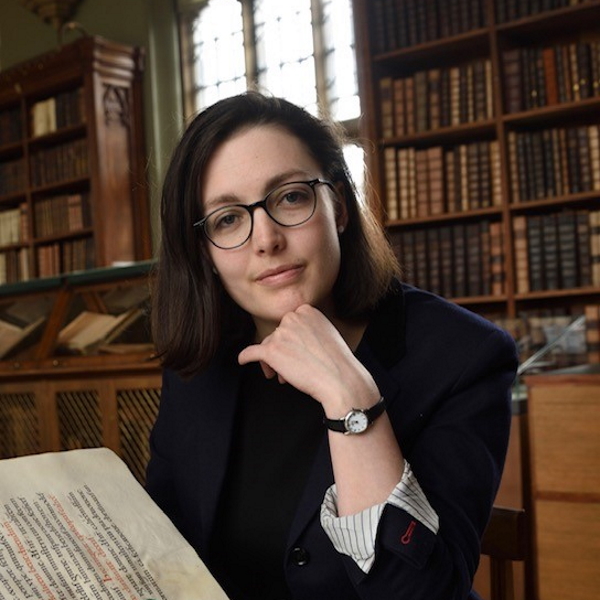 Project Manager, Science in the Making

Anne joined the Royal Society in May 2022 as the Project Manager for Phase II of Science in the Making. She has previously held positions at the National Gallery, Parker Library and Senate House Library after the completion of her PhD at the Warburg Institute. She’s interested in libraries, old books, and new technologies.

As a recent arrival at the Royal Society as the manager for our Science in the Making initiative, you might assume that my inaugural blogpost would centre around this digital project. Perhaps the work that goes into photographing our archives, or the software and technology that we’ll be using to show them to the world?

No, I’m afraid all that must wait for another time. Nevertheless, I’d like to talk today about 1s and 0s.

MS/47 is the oldest manuscript we hold in our archives. It’s a diminutive codex: its 34 pages are just 11 cm tall and 8 cm wide, and each holds 18 lines of text. It was written around 800 years ago: author Neil Ker, in his Medieval manuscripts in British libraries, dates the codex to ‘12th-13th century’, and I’ve had a recent conversation with Professor Tessa Webber FBA which further narrows this down to 1180-1220. It was donated to the Royal Society by James Orchard Halliwell FRS, who was known primarily as a Shakespearian collector and scholar, and a controversial figure given the allegations that he stole medieval manuscripts from Trinity College, Cambridge and from Sir Thomas Phillips, with whose daughter he later eloped…

Written before the invention of lined paper, the manuscript is made of parchment, a type of specially prepared animal hide (likely that of a sheep or a cow), and each of the outer edges is perforated with small pinprick holes spaced equally. By pressing a pointed object into the parchment and drawing a line from each pinprick hole to the corresponding hole on the other side of the sheet, scribes were able to create fine lines to guide their writing.

Stating in the introduction that the Latin text draws upon the works of Pythagoras, Nicomachus, Apuleius and Boethius, the manuscript contains a basic introduction to arithmetic. Beginning with how to determine if a number is even or odd, and the characteristics of each kind of number, the text then launches into the Tractaturis de algorismo, which addresses the topics of ‘addition, subtraction, doubling, dividing in half, multiplication, [and] division’ (f. 6v).

Given the subject matter and the order in which these themes are discussed, the text is similar to that found in other ‘algorithmic’ treatises in circulation at the end of the twelfth century and the beginning of the thirteenth; however, to my knowledge, the text in MS/47 is one of a kind. Between the theoretical definitions of the arithmetic operations, the text in the manuscript takes an abrupt turn into a new section on ‘The meanings, and names, forms, distinctions, and places [of digits]’. The presence of such a section is odd enough that Halliwell thought it worth transcribing in his 1840 catalogue of the manuscripts of the Royal Society. Translated, the section forms a list:

The Latin is just as repetitive as the English, but what’s remarkable is the introduction of the form of the numbers themselves. Prior to this point, the text represents numbers using the Roman system (I, II, III, IV etc.) when providing exemplar calculations. In essence, this section serves to introduce the reader to the Hindu-Arabic numerical system (1, 2, 3, 4 etc.), a novel concept that had only arrived in Europe a little over a century earlier, and wouldn’t catch on until the fifteenth century. By repeating the Hindu-Arabic forms of the numbers in red in the margin, the writer of this manuscript is clearly highlighting that the set of shapes associated with these ‘new’ numbers is the important information to be gleaned from this section of the text.

After a discussion of the way in which the place of the number determines its value, the text then moves on to add a tenth number, stating that ‘There is also a tenth figure with nothing of significance except for the place in which it stands that either amplifies or diminishes the significance of other [figures]. It is called zifera and it is represented as a 0’ (f. 16r). 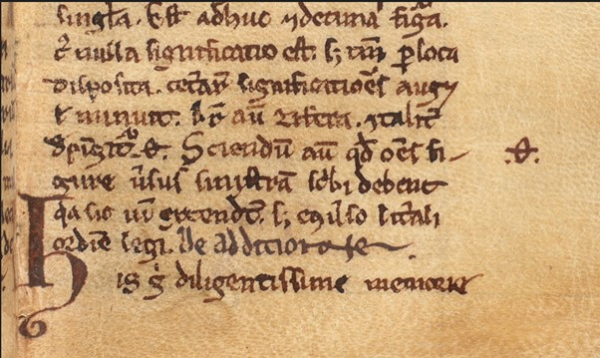 If the use of the Hindu-Arabic numerals is considered ‘new’, the use of zero as a place holder is revolutionary – its introduction to Europe is generally credited to Fibonacci, who wrote about ‘discovering’ zero in the Liber abaci which he composed in 1202. Not only does the author of MS/47 mention zero, but he also uses it, correctly, in the calculations that follow its introduction in the book, principally in examples of addition and subtraction in conjunction with the Hindu-Arabic numerals: in essence, changing the way western mathematics would ‘look’ and be conducted in the centuries to come.

The use of these ten digits – including zero – continues, of course, in the way in which we represent everything from prices at the grocery store to the mathematics of quantum physics. However, nowhere is the use of these numbers more important or prevalent than in the laptop I’m typing on: computers, at the most basic level, store and retrieve data using strings of binary, combination of 1s and 0s, signifying something is there (1) or that nothing is (0).

Imagine the joy of the author (I wonder if that’s him, in the marginal doodle above?) if he could see me now, writing about his ‘bit of book’ on a machine driven by bits, using technology for which he laid the groundwork more than 800 years ago.